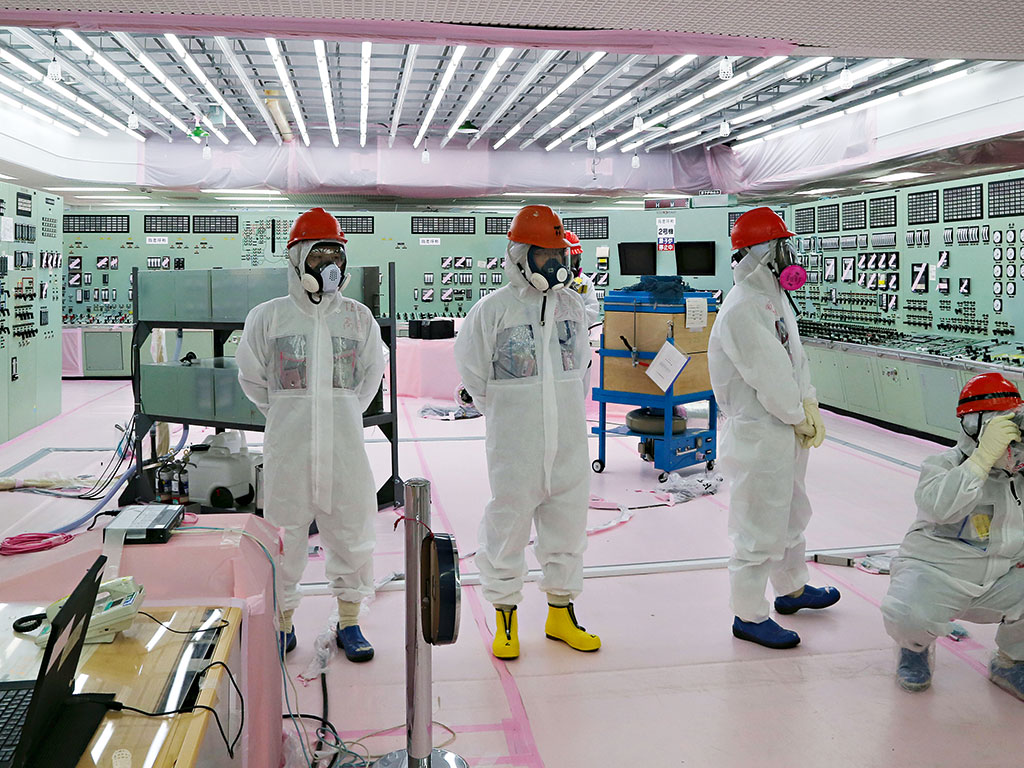 An inspection of the crippled Fukushima Daiichi Nuclear Power Plant in 2014. When the plant was destroyed in 2011, Japan's economy took a serious beating and many were left skeptical about the safety of the nuclear industry

The last of the major obstacles standing in the way of Japan’s nuclear revival was removed in November when politicians in the Kagoshima prefecture stamped their seal of approval on a pair of plant restarts. Scheduled to come online at some point in 2015, the reactors will be the first reintroduced since September 2013, when the last of the country’s 48 reactors was shut down.

Regional politicians have so far rallied behind the government’s support for a nuclear renaissance, citing the country’s reliance on foreign energy and widening trade deficit as the motivating factors. Speaking at a conference shortly after the Sendai restart was approved, local governor Yuichiro Ito said the move was “unavoidable” and that, without it, the country could struggle to regain its former level of competitiveness.

The idea of the foot in the door, with the first restart leading to automatic follow-up, is
an illusion

The sentiment is not one shared by the Japanese population, who still believe the economic priorities of central government are being placed before their own safety. Critics are calling the restarts a misguided attempt to bolster public finances at the expense of social wellbeing, and are unconvinced that the lessons of Fukushima have been learned.

In the shadow of Fukushima
It was on the afternoon of 11 March 2011 that a 15-metre high wave struck the now-infamous Fukushima Daiichi plant, tearing apart three of the six reactors and changing the face of the global nuclear industry. As a Level Seven incident, according to the International Nuclear and Radiological Event Scale, the seriousness of the disaster was matched only by Chernobyl. Although no deaths were tied to the event, over 100,000 people were displaced.

What followed was a mass retreat from nuclear energy. Concerned parties shut the doors at 50 plants and buried Japan’s nuclear industry. The disaster alerted the world to the ramifications – both social and financial – of nuclear failure, and put the Japanese population against what had once been thought of as a safe and reliable energy source.

One GlobeScan survey, conducted six months after the tsunami struck, showed that only 21 percent of a 23,231 sample agreed that “nuclear power is relatively safe and an important source of electricity, and we should build more nuclear plants”. Fast-forward to the spring of 2014 and little had changed: a survey conducted by the Asahi Shimbun newspaper found that, of a 2,109 sample of nuclear-related comments sent to the government between December 2013 and January 2014, 95.2 percent were opposed to the energy source.

“Public opposition has pushed traditionally timid newspapers like Asahi to take a clear stance and contribute rather acid editorials to the debate”, says Mycle Schneider, an international consultant on energy and nuclear policy, and lead author of The World Nuclear Industry Status Reports. “The government needs local consent to restart reactors, even if there is no legal requirement that translates this rule. Every single restart attempt will be a separate struggle. The idea of the foot in the door, with the first restart leading to automatic follow-up, is an illusion.”

Although the majority of the Japanese population see nuclear as an unsavoury option, analysts have said it could be a necessary evil. Nuclear once constituted approximately a third of Japan’s energy mix, and the shutdown has left the country with a critical energy shortage. At the beginning of 2014, authorities posted one of the worst annual trade deficits on record.

While Shinzo Abe’s Liberal Democrats were the only party that supported nuclear energy during the 2013 elections, the Prime Minister has been conspicuously quiet on the subject, for fear of the ill will that might be directed his way. Abe has deflected any questions about a return to nuclear onto local politicians, who are without the technical knowhow or political insight to present a meaningful case.

Yet pockets of support are beginning to emerge, principally in regions where jobs are scarce and opportunities slim. The Kagoshima prefecture, for example, where the revival is scheduled to kick off in the coming year, is indicative of this trend: the prospect of a nuclear restart offers a stimulus the region has lacked in recent years. As support for the revival gathers momentum, albeit ever so slowly, knowledge of the changes made to the industry since Fukushima will begin to garner the support they deserve.

Changed market
No doubt it will be some time before the industry shakes the stigma of the Fukushima disaster, which “was the result of collusion between the government, the regulators and [plant operator] TEPCO, and the lack of governance by said parties”, according to a 2012 report published by the Nuclear Accident Independent Investigation Commission. “They effectively betrayed the nation’s right to be safe from nuclear accidents. Therefore, we conclude that the accident was clearly ‘man-made’.”

However, the steps taken by government and regulators since have answered many of the questions put to the offending parties, and the industry today seems a far safer prospect. Key reforms introduced include the establishment of an independent regulatory authority, and measures to counter ‘the revolving door dilemma’, where the motivation of regulatory personnel is skewed by employment opportunities within the industry. In the case of Fukushima, shared interests between industry and regulatory bodies led both parties to place profitability ahead of public safety. Though efforts to prevent those circumstances from reoccurring, alongside a series of reforms to improve safety and security, have transformed the nuclear industry for the better, the public is less than convinced.

The problem then, is not that the government has failed to take action, but that it’s yet to adequately communicate to the public what it has done. Irrespective of whether there are any plants in operation or not, the nuclear industry of today, in terms of regulatory oversight, is utterly transformed from that which was hit in 2011 – not just in Japan but the world over.

The pressure on the Japanese government to steer clear of nuclear remains, yet the country has opted to resist public opposition for the time being and illustrate by example that the industry is changed for the better. “However, while it is difficult to assess the theory, any safety regulation is only as good as its implementation, which remains highly problematic”, says Schneider. Only after years of successful changes will nuclear regain the backing it so desperately needs, and the Japanese economy regain the measure of energy independence it has lost.