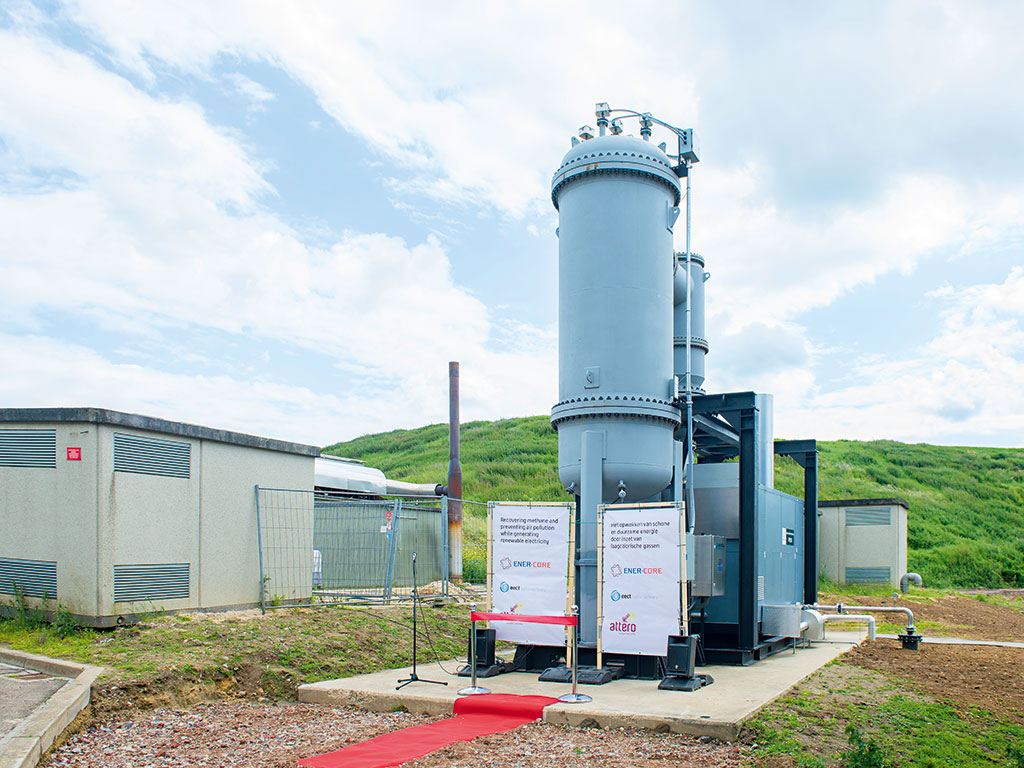 Ener-Core’s first commercial FP250 unit at Attero’s Schinnen landfill in the Netherlands. Ener-Core has been recognised for its advanced technology that converts methane into energy

Methane is well known for its environmentally damaging properties. It has a global warming impact that is 20 times higher than that of carbon dioxide. It accounts for a staggering 20 percent of the world’s greenhouse gas emissions and is the second biggest greenhouse gas emitted in the US from human activities.

What is often ignored is that methane has the power to generate energy – and money. For the past two centuries, that opportunity has literally been burnt out of existence through flaring practices all over the world. According to the World Bank Global Gas Flaring Reduction partnership, 150 billion cubic metres of gas is flared every year – going by 2011 figures for global production, that would make it the world’s sixth-biggest gas producer (just ahead of Qatar).

Flaring is both costly and dangerous, producing other harmful pollutants in the process – a reality that has led certain countries, such as Russia, to ban the practice. The other method still in use – venting – is yet more harmful. These issues have opened up a burgeoning market – and an urgent need – for alternatives.

New technologies
With that need in mind, new technologies have begun to emerge that utilise, rather than destroy, methane, paving the way for an exciting revolution in the energy world. Such practices are being encouraged by the Global Methane Initiative, an international partnership between governments and other organisations that focuses on advancing methane recovery.

But even those technologies can emit other potentially harmful gases, including mono-nitrogen oxides. California-based Ener-Core has found an innovative way of getting around that, with a unique system that uses gradual oxidation to generate electricity from methane without producing toxic gases. Its use is diverse, spanning from oil refineries and drilling sites, to landfills, chemical plants and coal mines.

Ener-Core’s technology caught the attention of the Honourable Stephen Johnson, former Administrator of the US Environmental Protection Agency (EPA), who led and conceived major environmental initiatives including the Methane to Markets Partnership while serving under President George W Bush. Convinced Ener-Core held the key to solving the problems he’d been trying to answer throughout his 27-year tenure at the EPA, Johnson invested in the company. “The principal investors called me and said… ‘We have come up with a technology which destroys methane, doesn’t produce other harmful gases, and will power a turbine that can be used for electricity’”, Johnson recalls. “My comment to the investors was: ‘If the technology does what you say it does, then I am very interested – I’m interested in helping the company, and I’m interested in investing.’”

Since then Ener-Core has been transformed from an idea into a reality, expanding from California to the Netherlands, where it recently installed its first commercial FP250 unit – a power generating system with a 250 kW turbine – at Attero’s Schinnen landfill.

That’s just the latest page in its history. Ener-Core began work in 2008 under the name FlexEnergy, before approaching Johnson as a potential advisor and investor in 2010. Following tests at the Lamb Canyon landfill, the company developed the Powerstation FP250 in 2011 – which saw the 100kW microturbine scaled up to 250kW. Its first operation was launched at a closed US military base landfill in Georgia in 2011, under a Department of Defense demonstration contract.

Unique system
In 2012, FlexEnergy became Ener-Core, focusing on further developing its gradual oxidation products – which now include, alongside the Powerstation FP250, the KG2-3GEF/GO. Designed for ultra-low BTU gas, the system operates on a 2MW turbine, ideal for power requirements from one to 12MW. In the near future, Ener-Core plans to scale up to large sizes, capturing more of the waste gas opportunity. It will do this by partnering with manufacturers of larger gas turbines, thereby enabling those turbines to generate power from low quality waste gases.

For example, Ener-Core just closed a global exclusive license with Dresser-Rand, one of the world’s largest manufacturers of rotating equipment for the oil and gas sectors. Under that agreement, Ener-Core will scale up its oxidiser technology to 2MW, and integrate it with Dresser-Rand’s 2MW KG2 turbine. Dresser-Rand will then commercialise this product globally under its brand, enabling its customers in the oil and gas sector, as well as many other sectors, to convert their waste gases into clean, useful power.

Ener-Core’s system works through a unique gradual oxidation vessel, which mixes fuel gas with air (to a 1.5 percent fuel-air ratio). The mixture is then pressurised and introduced into the oxidiser, causing a chemical reaction that produces heat. That energy turns a turbine, generating electricity.

The process takes place at a lower temperature than combustion and doesn’t produce flames, preventing the emissions and destruction of volatile organic compounds associated with burning. Designed to reach the Lowest Achievable Emission Rate, the unique system may also emit significantly lower amounts of nitrous oxides and carbon dioxide than competing technologies, when configured for ultra-low emissions.

Using what is otherwise a waste gas productively means generating power while simultaneously removing methane from the atmosphere. That otherwise-wasted energy is significant; it’s equivalent to over 65,000MW of potential power, according to Johnson. And if the 150 billion cubic metres of gas wasted through flaring every year were harnessed productively, it would be equivalent to replacing 89 million cars or 988 million barrels of oil.

Johnson recognises the ground-breaking implications the system has. He says: “Methane gas from a variety of sources can now be converted into electricity – electricity that can be used to power homes, buildings and, the most important part, without emitting virtually any additional pollutants and also providing significant economic advantage.”

That economic advantage is a substantial one. Converting methane into electricity can save a company up to 50 percent – or as much as $2m – on their annual energy costs, according to Johnson. Companies can expect to see a payback within three to five years of using the system.

Reliable renewable source
It’s surprising then that rising technologies such as Ener-Core’s still aren’t being talked about that much. Solar and wind power continue to dominate the renewable energy conversation, eclipsing these creative solutions with their out-there turbines and solar-panelled fields.

As important as those renewable sources are, what they don’t do is remove the toxic methane emissions penetrating our atmosphere. Nor do they ensure a constant supply of energy; their dependence on external factors makes their energy intermittent, which can of course be costly. “Obviously wind and solar power are important tools in our toolbox of energy production”, says Johnson. “The problem is the wind doesn’t always blow and the sun doesn’t always shine. So what’s important about our technology is that it offers baseload power.”

By ensuring a constant stream of energy, independent of external factors and easily controllable, Ener-Core’s technology offers businesses security and safeguards them from the losses other renewable sources can entail. That means they can compete with fossil fuels without having to pay the environmentally damaging consequences.

“We’re showing a way to make money from this rather than putting them out of business”, explains Paul Fukumoto, also of Ener-Core.

Rather than seeing them as barriers, Ener-Core is using potential regulations to spur on creative, profit-generating developments. “I believe that regulatory action does drive innovation”, says Johnson. “We have to advance and generate economic opportunity – especially for those subjected to methane regulation.”

Regulatory action
That emphasis on regulatory action is moving ever further to the foreground as discussions about methane – which traps radiation at a higher rate than carbon dioxide – heat up. In March, the EPA set out a strategy for regulating the gas, forming part of President Obama’s Climate Action Plan. The strategy included implementing voluntary measures for the oil and gas industry, following five white papers published in April that examined emissions from oil and gas sites.

The strategy aimed to encourage the recovery of methane for generating power, heating, or manufacturing – all of which, the EPA recognised, would drive investment and job creation. The initiatives also set out to make the air we breathe cleaner and reduce ground level ozone (which is responsible for smog). The strategy forms part of a plan to cut greenhouse gas emissions in the US by around 17 percent of 2005 levels by 2020.

But many believe the voluntary initiatives implemented under the strategy are not sufficient in cutting methane emissions. Such emissions are forecast to rise by 2030 if changes aren’t made, reversing the progress made over the past couple of decades (methane emissions have fallen 11 percent since 1990).

That was the sentiment 15 US senators expressed in September, when they sent a letter to President Obama pushing for methane regulation of oil and gas sites. “Voluntary standards are not enough”, the letter said. “Too many in the oil and gas sector have failed to adopt sound practices voluntarily, and the absence of uniform enforceable standards has allowed methane pollution to continue, wasting energy and threatening public health.” The call for stronger regulation isn’t unique to the US: under proposed EU guidelines, which could become binding in July 2015, European fracking firms would be legally obliged to monitor their own methane emissions.

Increased relevance
Johnson believes getting businesses on board before those regulations force action to be taken is one of the company’s key challenges. “There are early adopters, which is very exciting and necessary for raising sufficient capital in order to continue to advance technology”, he says. “But there are those that wait for regulations to be put in place to force them to do the right thing. And of course when regulations are put in place then people have to comply, and then they are very interested in new technologies.” Adopting the new technologies early could save businesses substantial amounts of money, time and, of course, energy.

Given the global push for a regulatory crackdown, Ener-Core’s clean oxidation system is moving to the foreground at a crucial moment. Its potential to help businesses comply with regulations and benefit the environment – while being rewarded financially – is becoming increasingly relevant.

It therefore seems it’s the very source that’s been forgotten about – methane – that holds the key to finally reconciling environmentalism with financial profit. Methane is a much-needed complement to solar and wind sources which, despite hogging the limelight, aren’t proving sufficient to deal with the scale of the problem. If enough businesses take up these new technologies then methane could prove a very real answer to the world’s most pressing environmental problems. Ener-Core could mark the start of an exciting transition that saves the day for businesses and, most importantly, the planet on which they operate.