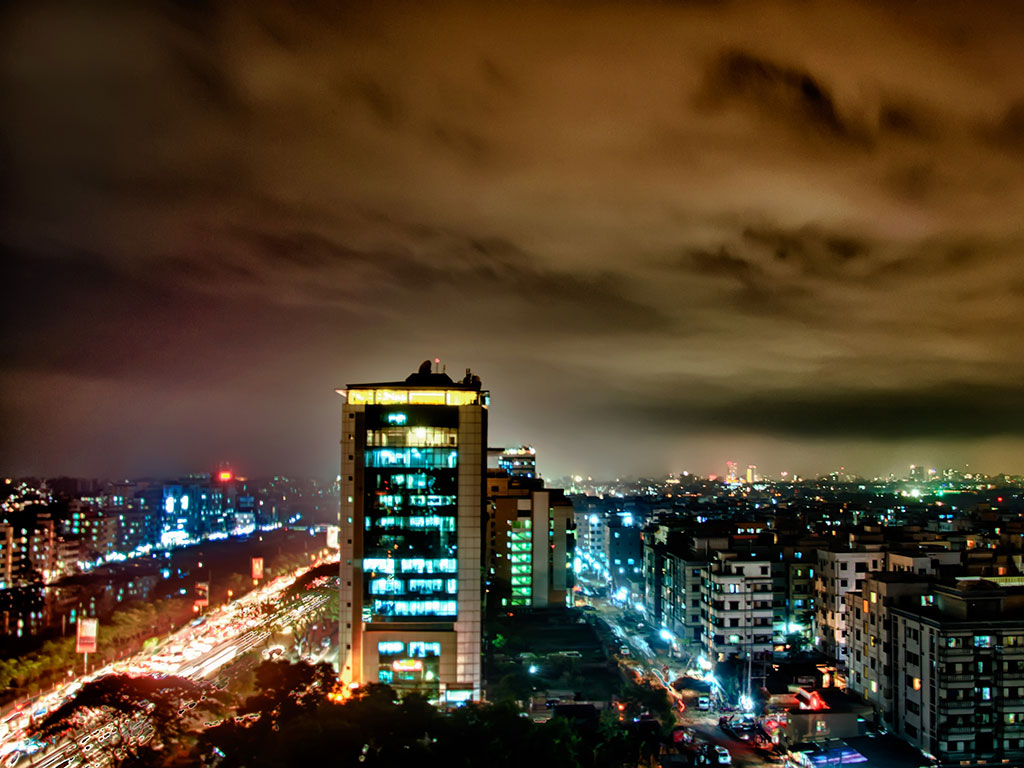 Dhaka city, the capital of Bangladesh - which is seeing a rapid demand in increase for electricity. Its government hopes to construct two nuclear power plants to deal with the need

The need for energy
Energy – or, more accurately, the ability to harness it – has always raised human living standards, be it through making the production easier and cheaper, reducing the burden of production for humans, or providing greater mobility through transport. Cheap, abundant energy made life in the 20th century more prosperous in North America and Europe than generations before could ever have imagined. In the 21st century, the rest of the world is – with some exceptions – going through this process. The “rise of the rest” is no secret: across the developing world economic growth rates are soaring, people are migrating to cities to work modern-waged labour jobs, living standards are rising and technology is proliferating. All of this leads to a higher demand for energy. According to Exxon Mobil, energy consumption is set to increase by 35 percent from 2010 to 2040.

Nuclear goes East
Meanwhile, Western nations have become increasingly sceptical about nuclear power, beginning in the 1980s. In his book The Imperative of Responsibility: In Search of Ethics for the Technological Age, philosopher Hans Jonas dismissed nuclear energy as increasing people’s “energy gluttony”. A decade later the sociologist Ulrich Beck claimed that the risk of nuclear power “completely evades human perspective abilities.” Under the influence of a mix of a newly emboldened environmentalism increased safety fears, compounded by accidents such as Chernobyl, many developed nations slowed down the growth of nuclear energy or stopped it altogether.

Despite such Western anxieties, to plug the gap between rising energy demands and supply, many developing nations are opting for nuclear power. In total, reports the Global Post, projections show that developing countries will “account for 40 percent of total global nuclear power generation by 2035, up from 17 percent in 2010.” The increase of nuclear power in the developing world provokes mixed reactions, with many questioning it as a suitable means through which developing countries can satisfy their growing energy demands. Today 45 countries are seriously considering the adoption of nuclear power; 37 of which are classified as developing nations by the World Bank. In the beginning of 2014, 72 nuclear reactors were under construction, the highest number in 25 years, reports the International Energy Agency.

It is no surprise that China and India, the two largest developing economies, are at the forefront of nuclear power growth. Nearly 70 percent of reactors currently under construction, the Global Post reports, are located in China, Russia and India, with China itself contributing 40 percent to that number. In 2010, China and India were together building 26 nuclear plants, according to the International Atomic Energy Agency. China also, far from simply adopting nuclear energy, is contributing to its technological development. As James Woudhuysen and Joe Kaplinsky write in their book Energise: A Future for Energy Innovation, “China’s work in ‘fourth generation’ (4G) nuclear technology has already drawn significant interest in the US, and might one day figure in a revitalised nuclear program for that country.”

While China and India have both used nuclear energy for a considerable amount of time, other developing countries looking to the nuclear option often lack the adequate infrastructure, skills and funds. “A nuclear power generation programme not only requires financial resources necessary for acquiring reactors and constructing plants, but also necessitates institutional and human resource capacities, including operational expertise, regulatory expertise, spent fuel management plan and site, non-proliferation commitment, among others,” says Jane Nakano a Senior Fellow at the Centre for Strategic and International Studies. Malcolm Grimston of the Centre for Environmental Policy at Imperial College London also agrees, telling World Finance that the main disadvantage of developing economies pursuing nuclear power is that it is “highly capital intensive” requiring “government access to large investment funds.”

Right for some
Faced with rising demand, Vietnam regularly experiences brownouts – an unintentional dim in electricity voltage. The country currently relies upon its oil reserves for much of its electricity. According to The Economist, it is seeing a rise in energy growth of 14 percent a year, which, ceteris paribus, will lead to the country becoming a net-energy importer by 2015. Although right now remains a net exporter, World Bank figures show, but as a recent report by the IEA looking at the future of energy in South East Asia underlines: Vietnam is seeing a “shift towards imports.” Since 2006, Vietnam has had plans to build nuclear power plants. According to Oil Price, Vietnam has plans to “build 13 NPPs [nuclear power plants] generating 15,000 megawatts, accounting for 10 percent of the country’s projected total power output.” This has largely been due to the help of Russia and Japan, two of the world’s leading nuclear nations, both through practical assistance and providing training. Vietnam also has a fairly strong centralised government, through which it should be able to enforce strict regulation and power-grid maintenance.

Bangladesh is also currently in transition from a rural to industrial economy, fuelled by constant migration to town from country. As a result, Bangladesh is seeing a rapid increase in demand for electricity; the 2013 financial year saw a rise in demand of 13 percent. Bangladesh is reliant upon natural gas for its energy needs. To lessen this dependence, its government hopes to construct two nuclear power plants, with assistance from Russian companies.

The lack of expertise in countries such as Vietnam and Bangladesh, according to Woudhuysen, should not be viewed as an issue. In a telephone interview, he makes clear that any skill deficiency in developing nations is a political barrier that can be overcome. Lack of skill is a result of lack of investment in the relevant education. If a nation is serious about nuclear energy, it can make the decision to allocate relevant resources towards relevant training, through subsiding study abroad. All countries have lacked nuclear expertise, until they have it; China in the 1940s had no nuclear expertise, but acquired it in the 1950s through Soviet training. Many developing nations looking towards nuclear have had personnel receive training from nuclear-savvy nations such as Russia, Japan and South Korea. This is a cost, but a cost that can be made in the face of weighing up the potential of a nuclear energy programme.

Geography also plays an important role. Professor Raminder Kaur from the University of Sussex doubts the wisdom of building nuclear power plants in a country such as Bangladesh “with an extremely vulnerable environment subject to flooding, cyclones, you name it.” The Fukushima disaster in Japan was primarily due to the plants location, in an area prone to natural disaster. Other developing nations, by accidents of geography, can more easily and cheaply, harness other sources. For instance hydro-electric power, which Ana Pueyo, a research fellow at the Institute of Development Studies, tells World Finance provides Brazil with 75 percent of its power. Solar panels can play some role for meeting energy demands. However, for rapidly industrialising economies, with growing factories, cities and industry, these panels alone do not suffice.

African nations have also started to set in motion plans to build nuclear power plants. Kenya’s National Economic & Social Council recommended in 2010 that the country attempt to utilise nuclear power by 2020 in order to meet rising electricity demands. Construction of the first plant is planned to begin in 2017. While uranium, the raw material upon which nuclear power runs, is sourced from a variety of locations, Namibia holds seven percent of the world’s reserves and is capable of supplying 10 percent of world uranium needs. As a result – along with rising energy demands – the government “has committed to a policy position of supplying its own electricity from nuclear power”, according to the World Nuclear Association.

Without strong financial backing and assistance from countries with nuclear expertise, these purported plans will fail to get off the ground. Many of these countries will also face the problem of a government strong enough to enforce required safety regulations and maintain a power grid. However one option that should be explored for developing nations, Woudhuysen tells World Finance, is the use of small modular reactors. These small nuclear reactors can be massed produced, he says. According to the Institute of Mechanical Engineers, they can be easily adopted by technologically-deprived developing nations. They can then be easily installed with minimal technical skill. Refuelling these reactors is also carried out by the manufacturers, reducing the need for a country to maintain an expensive army of nuclear engineers.

The nature of small modular reactors means that minimal capital investment is required compared to what is required for conventional nuclear plants. Likewise, countries with poor regulatory systems can also safely use them to provide for their power needs, as they use a “passive safety” system in which any threat to safety sees the reactor automatically shut down. Being a sealed unit sold ready for use, they are also resistant to weaponisation.

“[T]he decision to embark upon a nuclear power generation should not be taken lightly.  Nuclear power generation is not for every country, developed or developing,” Nakano says. As the IEA notes, “[n]uclear can play a key role in lowering emissions from the power sector, while improving security of energy supply, supporting fuel diversity and providing large-scale electricity at stable production costs.” Yet some countries lack the necessary infrastructure, regulation capabilities, capital and technical skill. While technical skill can be imported or nurtured through education investment, and capital can be coveted from abroad help, many developing economies should consider if their nation itself is suited for conventional nuclear energy. That is not to say they should be denied access to abundant and cheap energy, but rather, cheaper options such as hydro-electric power, if geography allows, or new technologies such as small modular reactors, should be considered. Though as Professor S. J. Tol of the University of Sussex tells World Finance, the source of energy which the developing world opts for is up for them to decide, not Western governments, international agencies, or indeed professors.