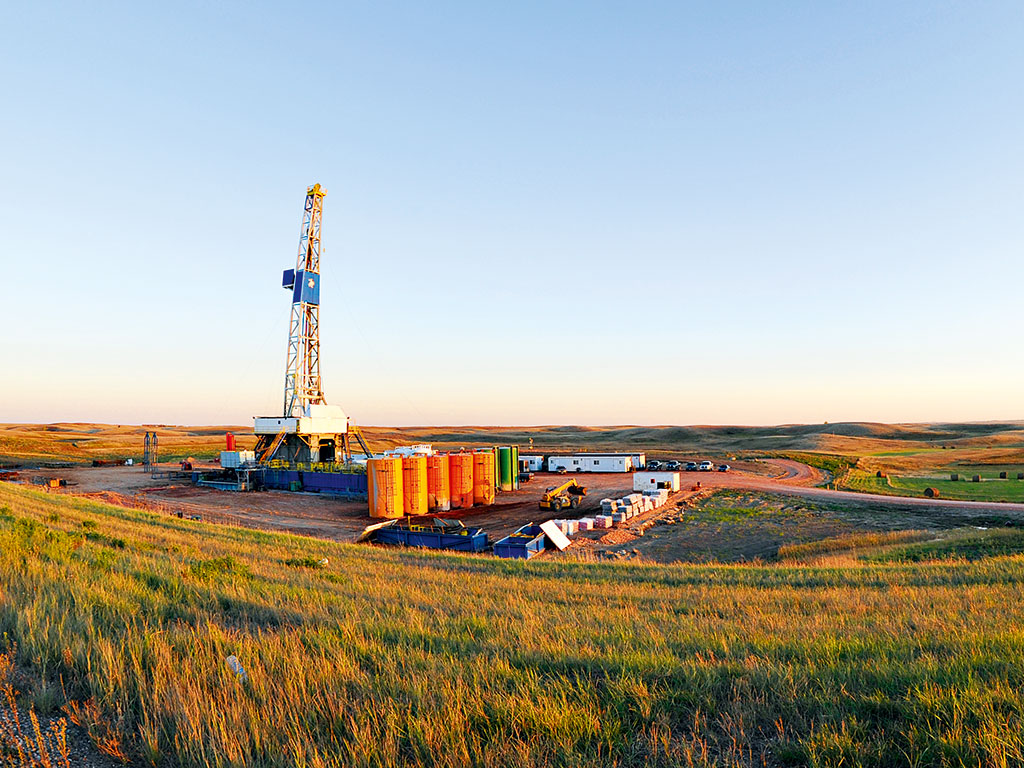 An oil drilling rig in Stanley, North Dakota. As the US moves to energy independence, the shale boom may help the country reassert its position as a leader in global trade

The worldwide oil cartel, otherwise known as OPEC, has overseen innumerable changes to the resource landscape since its inception a little over six decades ago; one being that the price of oil has experienced a four-fold increase in nominal terms in the last 10 years. While the resource collective currently accounts for 80 percent of the world’s conventional oil reserves, recent developments in North American markets threaten to rein in OPEC’s leadership.

[W]ith the shale boom, the US looks to switch from being a net importer to a net exporter in the coming years and reassert its position as a leader in world trade

The newfound recoverability of previously unrecoverable reserves – namely shale oil – promises to reconfigure the geographical distribution of oil supplies, as new fields such as the Bakken Shale come to play a vital part in the global industry. PwC believes global shale oil production has the potential to reach 14 million barrels per day by 2035, equal to 12 percent of total oil supply, and that this could reduce oil prices by 25 to 40 percent and boost global GDP by as much as 3.7 percent.

“There is potential for shale oil production to spread globally over the next couple of decades,” says the PwC report Shale Oil: The Next Energy Revolution. “If it does, it would revolutionise global energy markets, providing greater long-term energy security at lower cost for many countries.”

What is also crucial, however, is that, with the shale boom, the US looks to switch from being a net importer to a net exporter in the coming years and reassert its position as a leader in world trade. Many have speculated on whether or not the US stands on the brink of a new industrial age, and to what extent this could have positive or negative implications for global oil markets.

Wars and thieves
The dominion of OPEC could soon fade in light of the US’ shale oil revolution. While the changing oil trade landscape could well curb the collective’s prices and stymie demand, it could also serve to bolster the industry’s stability and productivity.

Cost reductions and improved profit margins are the two most important factors underpinning growth in the shale oil sector, and have led the International Energy Agency to believe non-OPEC production will reach 1.3 million barrels a day by the end of the year. Meanwhile, OPEC believes its constituents could together lose eight percent of their oil market share over the next five years, which means that, despite rising global demand, the group will produce an average of 29.2 million barrels per day in 2018 – far short of last year’s 30.3 million.

Ongoing social and political tensions in many of the organisation’s member states are also to blame for the often-volatile nature of OPEC oil prices. Among others, the Nigerian and Libyan national oil industries have come close to collapse.

Lowly oil thieves, responsible for siphoning off domestic supplies in Nigeria, are impacting the nation’s production rates, with some suggesting those responsible are stealing as much as 150,000 barrels per day. The oil and gas industry accounts for two-thirds of Nigerian government revenue and over 90 percent of export earnings, so a price could wreak havoc on the country’s economy. In Libya, conflict between government and militant forces meant oil production fell to its lowest level since 2011 last year, and, at one point, the rate fell to as little as 250,000 barrels a day – a far cry from 1.4 million only a few months earlier.

Fighting volatility
If there is any one aspect that affects oil prices above all else, it is macroeconomic instability: it is the number-one way in which a relatively stable US economy can help OPEC and its oil prices, simply by keeping volatility to a minimum.

“The potential availability and accessibility of significant reserves of shale oil around the globe – and the potential effect of increased shale oil production in limiting growth in global oil prices – has implications that stretch far beyond the oil industry,” says the PwC report. “At a global level, shale oil has the potential to reshape the global economy, increasing energy security, independence and affordability in the long term.”

The shale oil boom has kept price volatility to a minimum, and steadied benchmark crude trading rates in and around the $100-110 per barrel region throughout 2013. In addition, despite social and political upheaval in various countries, OPEC’s benchmark plummeted three percent last year on the year before – when it reached a record $109.45 per barrel. The three percent fall marks the first time in three years that the benchmark has failed to rise, although this movement is in line with broader market developments, which should cushion the blow.

Serving as an indication of OPEC’s nonchalance with regards to falling oil prices, Saudi Arabian Oil Minister Ali al-Naimi spoke earlier this year of shale oil’s calming effect on crude prices and welcomed the growth in US production. After meeting US Energy Secretary Ernest Moniz in January, al-Naimi said: “The kingdom welcomes this new source of energy supplies that contribute to meeting rising global energy demand and also contribute to the stability of the oil markets.”

The reasons for this attitude are simple: increased competition will only serve to bring down production costs, and ramp up the quality of related goods and services across the globe. Although demand for OPEC oil may well suffer, it’s a small price in return for the benefits that come with added stability and productivity. For this reason, it can be said with a reasonable degree of confidence that the US shale oil revolution does not just benefit the US, but the oil and gas industry as a whole.