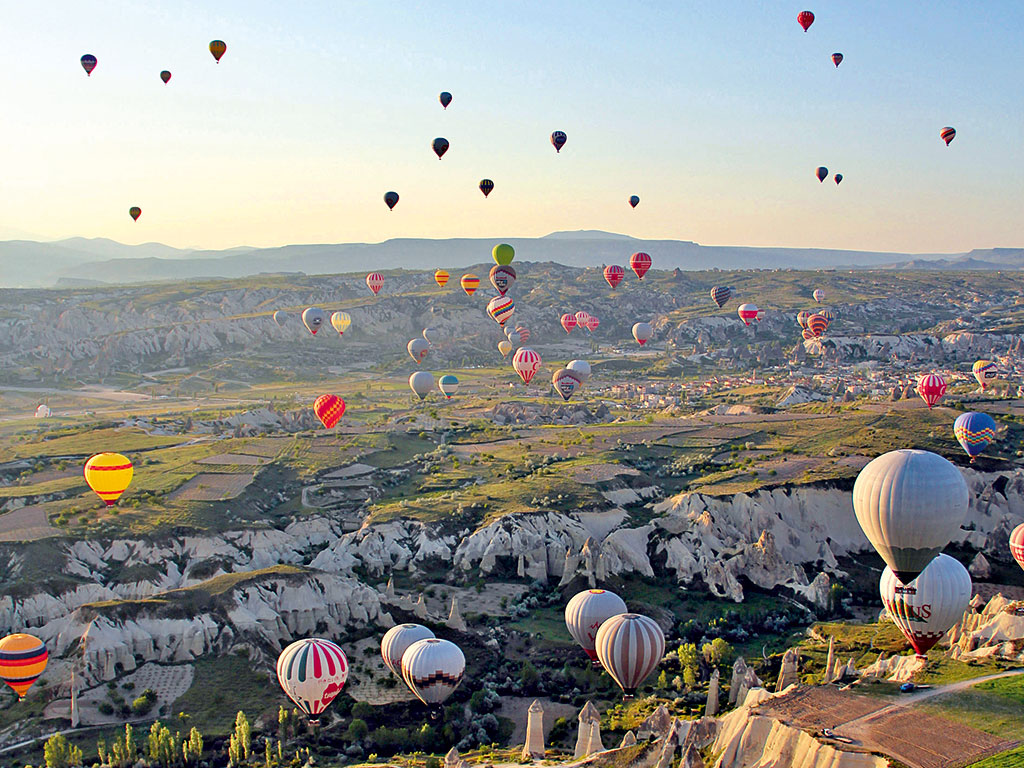 Hot air balloons fly over the earth pillars in Cappadocia. The region, famous for its chimney rocks, is hugely popular with tourists. The governent should continue encouraging tourism in Turkey, a cornerstone of the economy

Turkey’s star has been on the rise recently. Economically, the country has been booming – so much so that economist Jim O’Neil singled Turkey out from the crowd in his recent BBC Radio broadcast about the next economic giants. Structural reforms undertaken since 2005 have ensured the country has risen from an EU-wannabe to an economic powerhouse in its own right. And although these reforms are commendable, and a newfound penchant for FDI has smoothed the path to economic success, Turkey’s peripheral industries have also made a pivotal contribution.

The Turkish government did well to recognise the potential of its tourism industry early on, and then spared no effort in helping the industry grow and develop. Today, the country is the sixth most visited in the world, with over 30 million people flocking to its shores in 2012. Between 2007 and 2012, international arrivals shot up by 37 percent, and the trend is likely to endure when figures for 2013 are released. The official tourism target is to attract over 60 million international visitors by 2013, which would generate revenues of over $80bn for the country. It is no surprise the government is pulling out all the stops when it comes to the industry.

A haven of stability
Turkey bucked the trend in tourism last year. As tensions continued to escalate in the region, with Egypt being hit by violent protests and a coup, and civil war ravaging neighbouring Syria, tourists have remained attracted to Turkey. In fact, Turkey has benefited from the regional upheavals since the dawn of the Arab Spring in 2011. This is primarily to do with the fact that North African and Middle Eastern visitors have turned to Turkey as a safe and hospitable destination in the region. And though the number of visitors from Egypt and Syria has diminished drastically, the country has benefited from tourists choosing it over its troubled neighbours.

Though the number of visitors from Egypt and Syria has diminished drastically, the country has benefited from tourists choosing it over its troubled neighbours

Part of the appeal for tourists flocking to Turkey is the variety of attractions. Although Istanbul is the first port of call for many visitors – and it is unique and compelling in its own way – it is by no means the only exotic and enticing destination. The Aegean coast is popular with European tourists because of its affordable resorts and favourable climate. The curious rock formation desert and mysticism of the Cappadocia region of Central Anatolia has also been attracting growing numbers of international travellers.

Though each region is unique in what it can offer the traveller, Turkey has managed to create a coherent and fluid discourse that permeates its tourism industry; it is reflected in the promotion of its historical and religious sites, its food, and leisure activities. In short, Turkey has done a great job in re-branding itself as a top tourism destination.

Development through tourism
According to the Invest in Turkey governmental initiative, a conscious effort has been made to invest in the tourism industry as a way to foster socio-economic development throughout the country. As such, “the Ministry of Tourism and non-governmental actors of the tourism industry are working towards increasing tourism receipts by utilising the full potential of diverse opportunities in this key industry”.

Turkey has cleverly managed to attract and retain high levels of FDI across all sections of its industry, and that is true for the tourism industry as well. The Ministry for Tourism works alongside the Turkish Tourism Investor Association to encourage the inflow of foreign capital, and to facilitate the process. Helping to move the process along, a number of incentives have been designed to encourage foreign investors to set up shop in the country, ranging from straightforward tax reduction schemes to access to tourism development funds and a land allocation programme.

Though the industry as a whole has greatly benefited from these investments over the years, the Turkish government is by no means resting on its laurels. The focus now seems to be to develop the business tourism capacity. According to Invest In Turkey, “the combined efforts of the government and industry organisations have already enabled the rise of investment in new areas, such as construction of large convention and expo centres which boost convention tourism, particularly in the country’s largest city, Istanbul”.

Turkey is already the eighth most popular convention destination in the world, according to the International Congress and Convention Association. That figure is likely to increase exponentially as investment continues to flow in.

Benefitting other sectors
The Turkish government’s policy of incentivising investment into the country has been successful in many ways other than just boosting visitors. As a direct result of the growing number of inbound tourists, the country’s property market is heating up, and investment in real estate is also increasing. According to the REIDIN Turkey, residential property prices rose 17.11 percent during the year to January 2013, and, though Istanbul saw big rises (19.47 percent), popular tourism centres such as Izmir and Adana also grew by 16.07 percent and 16.54 percent respectively.

However, the biggest increases in property prices by far were seen in Antalya, an extremely popular tourism destination on the southern coast of the country. Anecdotal evidence by local property developers suggests 2013 figures will reveal sustained growth when they are released, according to the Global Property Guide.

However, while the figures remain encouraging, 2013 was not an altogether bumper year for Turkey or it’s tourism industry, and it is likely the local authorities and investment groups will have to rally in 2014 to recover some of the ground lost. Though the amount of foreign direct investment into Turkey remains high, it has slowly been decreasing since it’s peak of $17.2bn in 2008, and by 2012 it had dropped to $8.4bn. Of course, the global economic downturn has contributed to this slump, but the government must also shoulder some of the blame.

But Turkey still remains a great destination for investment. It has an expanding, young population with growing spending power. However, the penetration of technological and consumer goods is still fairly limited, offering a number of great opportunities. The country also fosters good relationships with both Europe – with which it has a number of trade agreements – and the UAE. Though some adjustments might be in order, government policy is appealing to foreign investors, and as such the country will likely continue to attract significant investments in coming years.

If Turkey remains clever in the way it explores its tourism potential, there is no reason that industry too can’t continue to foster the socio-economic development the country so sorely craves.