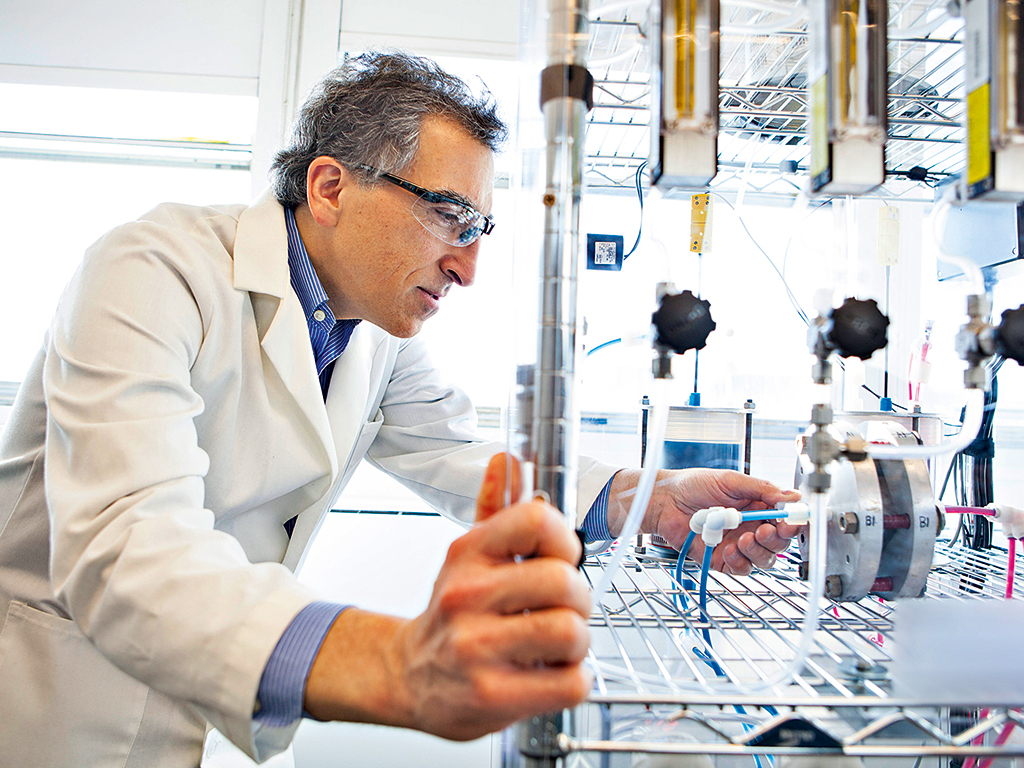 For a long time the use of renewable energy sources has been hampered by inconsistencies in energy production levels. Solar panels are only efficient during the day and in places with lots of sun and light. Wind turbines depend on shifting weather patterns. Tidal hydropower plants are likewise at the mercy of the elements. None of this would be an issue, per se, if there were a reliable large-scale energy storage system. Today, the discrepancy between the availability of fluctuating levels of wind and solar energy being produced, and the variability of peak demand for energy has proved to be the biggest challenge to instating renewables as viable large-scale energy sources. But that is all about to change.

Though there are a number of storage solutions built in to modern grids, there is a waste of up to 30 percent, and their use is nowhere near widespread. Structurally, this means that, for grids to deliver energy seamlessly and incorporate renewables, it is necessary to increase the use of traditional energy production to mitigate the variation in energy production levels. This is clearly counter-productive. So far, balancing the cost-effectiveness of solar and wind power with the need to make the technology economically viable and reliable has been something of a catch-22.

Scientists at the Harvard School of Engineering and Applied Sciences (SEAS) have dedicated an enormous amount of time and energy to tackling this challenge. Michael J Aziz, Gene and Tracy Sykes Professor of Materials and Energy Technologies at SEAS, told the university’s news site: “Our studies indicate that one to two days’ worth of storage is required for making solar and wind dispatchable through the electrical grid.” In order to store 50 hours of energy from a one-megawatt power capacity wind turbine, for instance, a solution might be to buy 50MW battery capacity. However, that would entail buying 50MW of storage capacity when only one is necessary.

of grid power is wasted

A new idea
Research by Aziz and Roy G Gordon, Thomas Dudley Cabot Professor of Chemistry and Professor of Materials Science at the same institution, focuses on the increasingly popular field of flow battery technology. This type of energy storage device has been around for some time and traditionally relies on energy being held within chemical fluids. Batteries come in a variety of sizes, and are composed of tanks in which the chemicals are stored, and electrochemical conversion hardware through which the fluids flow. Different chemical solutions are moved through two electrodes, separated by a membrane.

Science reporter Mark Peplow explains: “The chemicals exchange protons across the membrane and shuttle electrons around the circuit that connects the electrodes, which discharges the battery. Reversing the reaction recharges the cell.” It is a rather simple idea. But, because the active components of flow batteries are metals – vanadium in particular – the cost-per-watt of these batteries has remained high.

However, Aziz and Gordon have developed a new variety of flow-battery that has the potential to revolutionise this nascent technology. They reported their findings in the most recent issue of Nature, after obtaining a US Department of Energy grant, under the Advanced Research Projects Agency-Energy initiative. Their organic mega-flow battery is metal-free and can be scaled up to grid-size. It relies on the type of electrochemistry found in quinones, naturally abounding, small, organic molecules, not dissimilar to the particles that store energy in living things. Quinones are abundant in nature and easy to obtain. They occur in crude oil as well as in many green plants, though the molecule used in the Harvard experiment is similar in structure to the quinones found in rhubarb.

“The whole world of electricity storage has been using metal ions in various charge states but there is a limited number that you can put into solution and use to store energy, and none of them can economically store massive amounts of renewable energy,” Gordon told the university news site. “With organic molecules, we introduce a vast new set of possibilities. Some of them will be terrible and some will be really good. With these quinones, we have the first ones that look really good.”

Efficient and cost-effective
Aziz and Gordon’s quinone organic flow battery already performs as efficiently as vanadium flow batteries – and at a fraction of the cost to produce. For the new battery to work, large tanks would be needed to capture the energy produced by solar or wind generators. These could potentially be incorporated into the electricity grid or be dispatched on site. Smaller tanks could also be used by households; a conceivably revolutionary piece of tech for the 20 percent of the global population not connected to an electricity grid. “Imagine a device the size of a home heating oil tank sitting in your basement,” says study co-lead author Michael Marshak, on the Harvard news website. “It would store a day’s worth of sunshine from the solar panels on the roof of your house, potentially providing enough to power your household from late afternoon, through the night, into the next morning, without burning any fossil fuels.”

The organic flow battery is a relatively simple device and extremely accessible. According to Aziz, the device is capable of storing one kilowatt-hour of energy for $27 – about a third of the cost of a similar vanadium-based battery. The research team has already subjected the organic flow battery to 100 test cycles without it showing any signs of degradation. As promising as these results are, for the project’s viability to be proven, it will take many more thousands of cycles.

Sustainable Innovations, a partner in the research, expects to produce a final version of the organic flow battery for demonstrations in as little as three years. According to the company, the portable unit, about the size of a horse cart, will be connected to solar panels installed on the roofs of commercial buildings. The battery will be able to distribute the energy produced throughout the building, or store it and dispense it as required.

“You could theoretically put this on any node on the grid,” Aziz said. “If the market price fluctuates enough, you could put a storage device there and buy electricity to store it when the price is low and then sell it back when the price is high. In addition, you might be able to avoid the permitting and gas-supply problems of having to build a gas-fired power plant just to meet the occasional needs of a growing peak demand.”

Though the spread of photovoltaic technologies has been fast, growth in the future may slow due to concerns over overall efficiency. But the organic flow battery is likely to change that, when it makes it through testing stages. Though it will still be a few years before this new battery becomes commercially available, it will be the light at the end of the tunnel, silencing renewable energy detractors once and
for all.