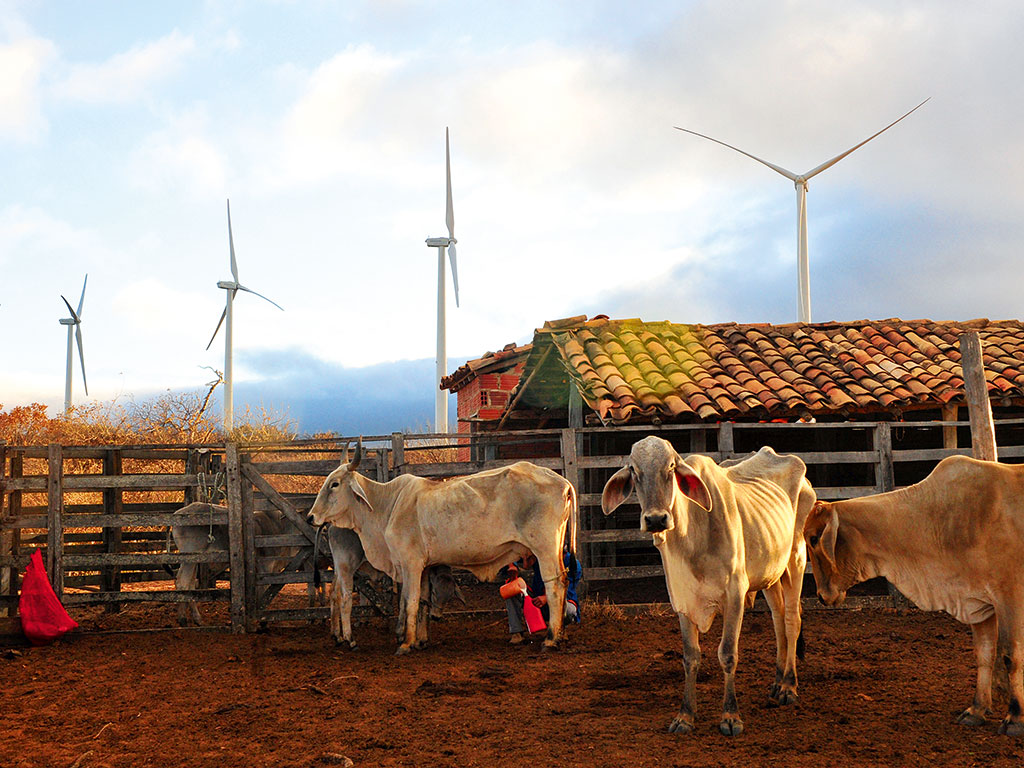 “A place with a huge potential for growth” – that’s how renewable energy company Renova Energia sees the Brazilian Northeast Region. The area is home to more than 27 percent of the country’s inhabitants: most of them customers who will improve their social positions across their lifetimes.

The wind and sun are abundant resources in the region, and thus have considerable potential for growth as part of the country’s energy matrix. Renova – a 100 percent Brazilian-based company and a leader in the eolic energy sector – has discovered in Bahia’s semi-arid climate what could be called a ‘deposit’ of winds. These, together with solar energy, are going to be one of the key drivers for the company’s expansion.

Capacity of Alto Sertão I

Since mid-2007, when the company first arrived in the Northeast Region, Renova has been committed to developing the communities around its projects in the cities of Caetité, Guanambi and Igaporã. The company’s managerial model is based on the continuous growth of the group’s businesses, in adding value to all stakeholders involved, and in a transverse approach to sustainability.

Renova understood that dialogue with people from these communities would be a key issue in building a good relationship. The company created an organisational structure with specific teams dedicated to assessing the requests and needs of local people.

Those communities are primarily made up of families who make a living from subsistence and small-scale agricultural activities, retired people, and groups whose income is dependent on social programmes from the national government. For many, their land is their sole property. At the beginning of its operations, Renova decided land leasehold was the most appropriate way to contribute to regional development. Thus, instead of just acquiring land on which to install its windmills, the company pays a type of rent to small landholders.

Ney Maron, Sustainability and Communications Director at Renova Energia, says: “Over 300 families benefit from the leasing policy. We work, literally, in people’s backyards.” He explains that, once lands are actually leased, families can keep using those areas, earning new income from the rent while continuing to receive the gains they get from plantation or husbandry. By 2008, when the company first arrived in the region, annual income per capita had reached about BRL3,000. Two years later, some landholders with areas leased by the company had annual incomes of more than BRL8,000.

We work, literally, in people’s backyards

Estimates indicate that, since operations began in Bahia’s semi-arid region, 135,000 inhabitants have enjoyed indirect benefits from the windmills. Another benefit brought to the region by Renova was the legalisation of much of the leased land. Many of the landowners had been living in the region for years but had never before held deeds or ownership documents for their property.

Sustainability as a pillar
Renova focuses on sustainability as one of its pillars, not only because of the nature of its business, but also so its governance model matches international standards and best practices. Since its foundation, Renova has had a department focused on the environment: it is currently made up of over 40 fully dedicated professionals. Maron says: “Unlike other companies, where sustainability is thought of as an outside-in process, in Renova’s case, it has been taken into account since the beginning as a key strategy.

“It works this way in all areas of the company, from the enhancement of engineering processes, looking towards impact reduction, to the conceiving of social programmes and tightening the relationship with the community.” The company’s listing on the São Paulo Stock Exchange helped settle its governance model.

Renova detailed all managerial routines in its Sustainability Report, the first edition of the which was released in 2012 with the outcomes and achievements of 2011. The idea is to show how the issue crosses all areas and processes, including the company’s relations with employees, shareholders, investors, communities and suppliers.

Sustainability works as an instrument to bring Renova’s production cycle closer to its operations: not only reducing costs, but also contributing to local development. A good example is its partnership with Alstom. This involves the delivery, in the next four years, of 440 wind-power generators. The generators will be produced in Alstom’s unit in Bahia state – the same place Renova’s wind farms are located. The agreement will lead to the production of more efficient equipment, tailor-made for the winds in the region, and will stimulate the local economy. Another company, Tecsis, has announced it will build a new unit to produce wind turbine blades in the region.

The successful commissioning of both complexes was the result of competent planning, license gathering, and coordination of logistics and installation – all while maintaining sustainable standards in every stage of implementation.

Renova is also prepared to develop solar power projects in the semi-arid region, with large-scale photovoltaic units. The company’s expansion plans are based on the corporative strategy of developing, building and operating energy projects with financial discipline, keeping an eye on customers’ needs and respecting employees, as well as maintaining harmonious relations with the environment and communities. This is a mandatory objective for the company, to be accomplished by promoting transparency in negotiations and dialogue, and stimulating local development.

The company has invested in solar energy R&D, with an entire team dedicated to researching ways of generating electricity from solar panels. Research has already found that solar irradiation in Bahia’s semi-arid region offers some of the most favourable conditions in the country – so the company is competitive for solar, as well as wind, energy. In January 2013, Renova commissioned its first solar power plant, at Yamana Gold’s facilities in the Pilar de Goiás municipality. Many more on-going projects will be commissioned in the next few months.

The semi-arid winds have not only attracted wind-power generators to the cities of Caetité, Guanambi and Igaporã: they have also stimulated land development projects, such as the Catavento (“pinwheel” in English) Programme – an initiative promoted by Renova.
The Catavento Programme is divided into four sections: socioeconomics, environment, culture and heritage, and organisational development. The success of the projects was due to the strong involvement of the local population. In its first year, it drew 10,000 locals. Luciana Gutmann, Renova’s Sustainability Manager, explains: “People in the communities propose the projects, so they are legitimised by coming from the longings and vocations of each community.”

People in the communities propose the projects, so they are legitimised by coming from the longings and vocations of each community

The programme is not an obligation: it is Renova’s own initiative. The company decided to develop the programme because it believed in the benefits of getting involved with local communities. The programme was forecast to have received BRL9.4m (approximately £2.5m) in investments by the beginning of 2014. Iraci Rodrigues de Oliveira is a member of the Caetité Women’s Movement, which produces jams and marmalades from local fruits. She says the initiative has helped generate income and jobs in her city: “It’s another [source] of income that we now have.”

The Lagoa de Dentro Association in Caetité is another initiative receiving support from the Catavento Programme. It produces biscuits, manioc starch cookies (manioc is a tuberous root and a staple in the Northeast region of Brazil), cakes, buns and other manioc-based products. The women in the municipality of Lagoa de Dentro were recently able to sign a contract with the local city hall to provide around 400 kilos of biscuits for public school lunches. The initiative should guarantee a monthly income of BRL6,400 (£1,670) to its participants, and the profits will be distributed among people and re-invested in the project.

All the Catavento Programme’s initiatives aim to mobilise local sectors, with Renova’s support. This network of cooperation was what made the establishment of the Bahia’s Alto Sertão Museum feasible. Lielva Azevedo, historian and heir to the building that will hold the museum, says: “Since I was a little girl, I used to listen to my granddad. He was a simple man, with no formal education, and he used to say we needed to preserve the house because it was part of the historical heritage.” The family hopes the building will be preserved and eventually fulfil an important sociocultural purpose.

The idea for the museum came from the need to preserve the artefacts found in and around the region’s parks. The Catavento Programme mobilised people, getting them involved, and contributed significantly to the protection of the existing collection (made up of around 30,000 pieces).

The Catavento Programme is also involved in a number of environmental projects, including one to preserve hydric resources. The initiative helps around 300 families from the areas influenced by the Renova wind farms – a semi-arid region affected by water shortages. Dams are repaired and cleaned, structures are isolated against earthquakes, springs are preserved and locals educated about the environment. At the Beira Rio Dam, water storage capacity was increased by 30 percent, improving the circumstances of around 150 families.

Gutmann says: “The big question is not just recovering, but investing in environmental education so that the public has an understanding of the sustainable use of a scarce resource in the semi-arid.” The company looks to promote what it describes as “social dialogue” in order to develop a relationship with the locals. This will enable better identification of suitable socio-environmental mechanisms for the region.

The Catavento Program also supported the creation of community centres for professional enablement, with courses focused on carpentry, masonry and rebar setting. These help prepare local residents not only for the professional jobs market, but also for jobs within Renova.

Bruna Napoli, the company’s environmental manager, says: “We have made our workers aware of the importance of preservation through internal training and security dialogues.” Subjects covered include environmental risks, biodiversity, residue generation and the use of water. When hiring a service provider, Renova demands details of its environmental management and that the provider complies with Renova’s own internal procedures.

Deep impact operations – such as vegetation suppression, and managing the damage caused by the transportation of equipment and materials – are closely monitored to ensure the negative impact is as small as possible. The use of smaller access roads, for example, means the removal of fewer native plants and, consequently, a much less aggressive intervention in the environment. Renova also has best-practice guidelines for the handling of by-products generated by its activities.

There are certain procedures to be carried out in the case of accidents. Everything is done to ensure materials are not wasted and by-products eliminated. Water usage is also monitored constantly: both spring water and the water collected in legislation-approved wells. Any defalcation is detected and immediately corrected. In areas where endangered or vulnerable species are detected, plans have been made for preservation. Renova has never received any type of notification due to non-compliance with environmental requirements.