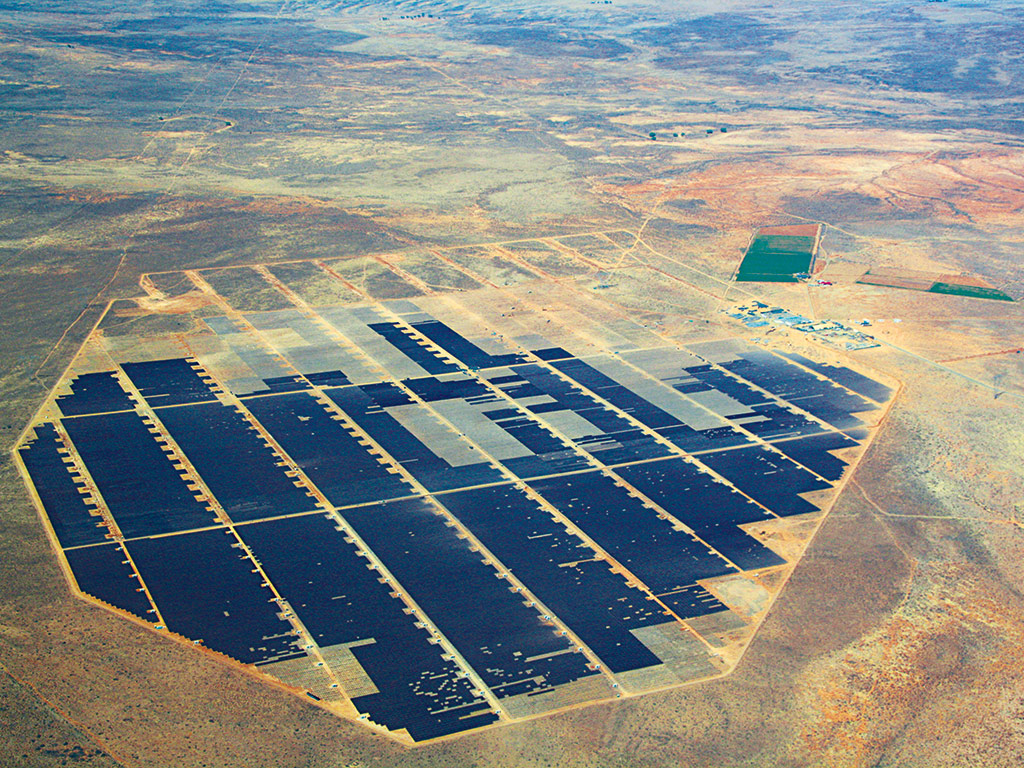 In 2012, South Africa recorded the world’s highest growth in renewable energy investment, with $5.7bn invested according to the UN Environment Programme. The surge in investment, led largely by solar power projects, comes as South Africa moves to reduce its dependence on coal, which currently accounts for around 86 percent of the country’s energy. To achieve this, the South African Department of Energy has set the ambitious target of generating 18GW of clean energy by 2030.

Investments in large-scale solar power projects will transform the continent, where rising populations and six of the world’s 10 fastest-growing economies have resulted in ever growing energy deficits. Inspired by the South African Department of Energy, South Africa is on track to become one of the fastest-growing renewable energy markets in the world.

Overcoming renewable energy obstacles
South Africa is also aware of the challenges it faces with future increased carbon emissions and water shortages, being the 12th highest carbon-emitting nation. The costs of renewable energy are often emphasised without fair comparison to those of traditional energy sources. For example, South African coal-fired stations consume 1.2 litres of water for every unit of electricity produced. A 1,000MW coal-fired power station uses just short of nine million cubic metres of water per annum. It is simple to see and measure how the use of coal-fired stations will affect the long-term energy supply of South Africa. Solar solutions prove beneficial in comparison to fossil fuel and nuclear energy.

Investments in large-scale solar power projects will transform the continent

The South African Government is now more than ever committed to embracing and developing the benefits that clean energy offers. This was clearly visible when, in 2009, it announced plans to award the first licenses to independent power producers by early 2011. This commitment has been further demonstrated by licenses being awarded in 2012 and again through its third IPP Bid Round in 2013.

Being the only company in South Africa to win licenses in both Bid Round 1 and Bid Round 2, we understand the financial restraints owing to the steep initial capital, as well as the legal and technical project costs that can hamper the expansion of the renewable energy industry in South Africa. You will find domestic companies partnering with, and learning from, international firms that have the relevant experience and skills.

Getting the correct answers is vital to decision-making. We use the latest computerised tools to drive precision in our irradiation assessment. Field engineers, plant layout and financial modelling are critical to our business. Of course you need the correct team of professionals, engineers and accountants to optimise these tools.

PV solar meets low-cost airlines
The Phelan Energy strategy is based around the low-cost airline model. A good example of this is Irish low-cost airline Ryanair. In 1991, Chief Executive Officer Michael O’Leary was given the task of making the airline profitable and believed the key to profitability was low fares, quick turnaround times and a single model of aircraft. Ryanair’s revenue in 2013 was €4.8bn, the airline carried 81.5 million passengers through the consistent pursuit of its low-cost business model, while at the same time boasting profits of €570m.

Phelan Energy Group is active with signed joined ventures in Jordan and Saudi Arabia. Our market development programme is called 10cc. It defines the solar irradiation sweet spot that stretches around the globe in a band that is 10 degrees North and South of the Tropics of Cancer and Capricorn.

Our vision is to drive international volume and footprint by being the world’s lowest-cost producer without compromise of quality through cost management, innovation and efficiency, and thus drive our footprint and installed capacity. Phelan Energy Group’s target is 1.5GW installed by 2018.

Abundant solar and wind
Water and land are non-renewable energy sources. Without a renewable solution, we will continue to import oil, risk supertanker spills and be pressured to make political decisions based on our bad energy habits. Oil and coal may be a commodity but the cost continues to rise and solar energy will reduce in price over the coming decade. It will be found by governments to be at a far lower cost than traditional fossil fuel and nuclear energy.

Our company vision is to be a world leader in the market for the provision of low-cost solar energy. We have sourced 25 farms within South Africa alone and maintain significant ownership of our current and future projects. We have completed the tendering process, operation and maintenance of all projects, and have started the installation process of the first phase of the first De Aar development in the Northern Cape. The completed farm is set to produce 200MW of photovoltaic power over two initial phases with the capacity at the same location to increase to 400MW. The two phases will be completed by 2016 and will be well on its way to being the largest solar farm not only in Africa but in the Southern Hemisphere. This first phase alone will generate enough electricity to power approximately 35,000 South African homes every year and will be completely erected by February 2014, with a view to delivering the first 75MW of solar generated electricity into Eskom’s power grid. Our aim is to put South Africa on its way to achieving the production of 3,725MW of renewable energy envisaged for 2030 by the Independent Resources Procurement Programme.

Power to the people
Many South Africans are dependent on the income of the employed sector and social grants. The development of renewable energy sources creates new economic opportunities through job creation, improved education and various other social development programmes in the rural towns of South Africa.

The National Energy Regulator of South Africa has established certain criteria that, as a responsible and dedicated company, we need to fulfil. We have made a commitment to create sustainable jobs, educate and equip the local community with skills, assist the community in creating economic opportunities through enterprise development, ensure upliftment, and address social challenges within the communities in which our farms are situated.

The South African Department of Energy’s targets for local content stipulate at least 20 percent local employment. Initially, we planned to employ 80 percent of our required workforce locally but this target has reached 90 percent. Unskilled labour has undergone training while previously unemployed artisans are being further developed. Of the 2,000 or more locals currently employed by Solar Capital, 90 percent are from previously disadvantaged backgrounds. During the maintenance and operational phase of the projects, Solar Capital will employ over 200 permanent employees.

Further commitments have been made by Solar Capital to spend 1.75 percent, ZAR200m (£12.1m), of its total income on social-economic development and one percent, ZAR114m (£6.9m) on enterprise development over the 20-year lifespan of the project. A community trust has been formed to assist the community of De Aar, which will own eight percent of the project.

In early 2013, outside any commitment to the South African Department of Energy, Solar Capital donated ZAR1m (approximately £61,700) to the community project FARR (Foundation for Alcohol Related Research). FARR is the leading NGO source of research and information on Foetal Alcohol Spectrum Disorders (FASD) and the most severe form of this disorder (Foetal Alcohol Syndrome) in South Africa.

Our future
We are currently developing our own propriety technologies through our dedicated research and development unit. This department is a core strategic element to our growth and conducts a constant review of renewable technologies such as storage, as well as optimisation of existing technologies and practices.

Solar Capital Chief Executive Officer Albert Lennon added: “At present, we are focused on developing a variety of components for PV Plants, thus providing solutions to reduce the cost of energy. The development of our next generation 7 X Light Concentration Mahiba project is currently underway and is due to be launched in 2014 by the Phelan Energy Group Research and Development Testing Unit.”

Increasing the proportion of energy South Africa generates from solar PV cells could help lower the price of electricity. Renewable power could potentially cost half of Eskom’s coal powered electricity, which is expected to reach ZAR1.69/kWh (£0.1/kWh). That could make PV the cheapest energy generating technology in South Africa by 2020, costing under ZAR0.90/kWh (£0.06/kWh).

Lennon adds: “One of our key strengths is to combine keen commercial competitiveness, ‘technology agnostic approach’ and broad network in the global renewable energy sector, together with several years worth of real-world renewable energy market experience that allows us to adapt to any market location, maximise its potential and provide solar PV energy at unprecedentedly low costs. We continuously strive for technical and commercial excellence.”

Africa
While South Africa is clearly setting the pace, projects are being announced across the continent as more countries look to unlock their own massive solar potential. International suppliers have expressed major interest in South Africa, not only to establish a local footprint, but also to secure access to other emerging markets in sub-Saharan Africa.

In April last year, Mauritania launched what has been described as Africa’s biggest solar plant so far: a 15MW facility designed to provide 10 percent of the country’s energy capacity. In May, Morocco began the first phase of a 160MW solar power plant as part of the country’s efforts to produce 2,000MW of solar energy by 2020.