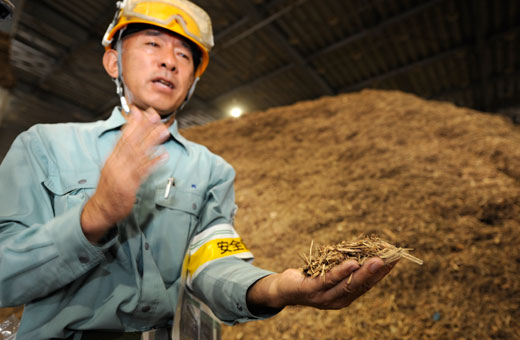 Biomass is a method of creating energy from matter that generally has little or no other use. Things like household rubbish, branches, lawn clippings, kitchen compost and wood chips can stay out of the landfills and can create energy at the same time. Almost any kind of biodegradable organic material can produce energy when it is burned, and this is where the concept of biomass comes from. The energy in the biomass products is released as heat when it is burned; this in turn can be used to heat water, producing steam.

Another method of releasing biomass energy takes longer but produces another natural product. When biomass is left to compost on its own, it produces heat and methane gas.  Once captured, these products can be used to heat buildings and put to other uses.  In fact, Antioch Community High School in Antioch, Illinois (US) became the first school district in the country to receive its heat and electricity from landfill gas. The naturally produced gas is piped from the landfill to turbines on the school property. The electricity is enough to power not only the school, but approximately 120 homes as well. The excess energy is sold back to the utility company, producing a revenue stream for the school, especially during the summer when the students are out of school, but air-conditioner use puts more demand on the electricity grid.

Using biomass as a renewable energy source creates no net increase in atmospheric carbon dioxide emissions in the atmosphere. Biomass use is increasing in popularity; it currently meets almost 14 percent of global energy need, and supplies more energy in the US than any other form of renewable energy. In the EU, five percent of energy is currently generated from bio fuels, and by 2020 a target of 20 percent generation is believed to be attainable.

Globally, more and more countries are shifting energy production from fossil fuel sources, which will eventually be depleted, to renewable energy sources. Biomass is the only other carbon resource that can be used to generate energy, and it has the added benefit of not adding to our carbon footprint. There is also enough biomass to be used as a substitute for other carbon-based forms of energy production, like oil and natural gas.

Moving forward, several new technologies promise even better effective uses for biomass energy. Enzymatic hydrolysis of biomass is just emerging as a method of extracting and producing sugars that can be used in a variety of commercial and industrial applications.  Care will also need to be taken that erosion and degradation of soil quality is monitored as more and more acreage is utilised for production of various biomass primary ingredients.  So long as biodiversity is maintained while the use of biodiversity is encouraged, the future looks extremely bright for this ‘green’ technology.

As research develops biomass energy crops that can be grown in currently underutilised areas of the world, the potential for biomass contribution to the world’s energy needs is very bright.