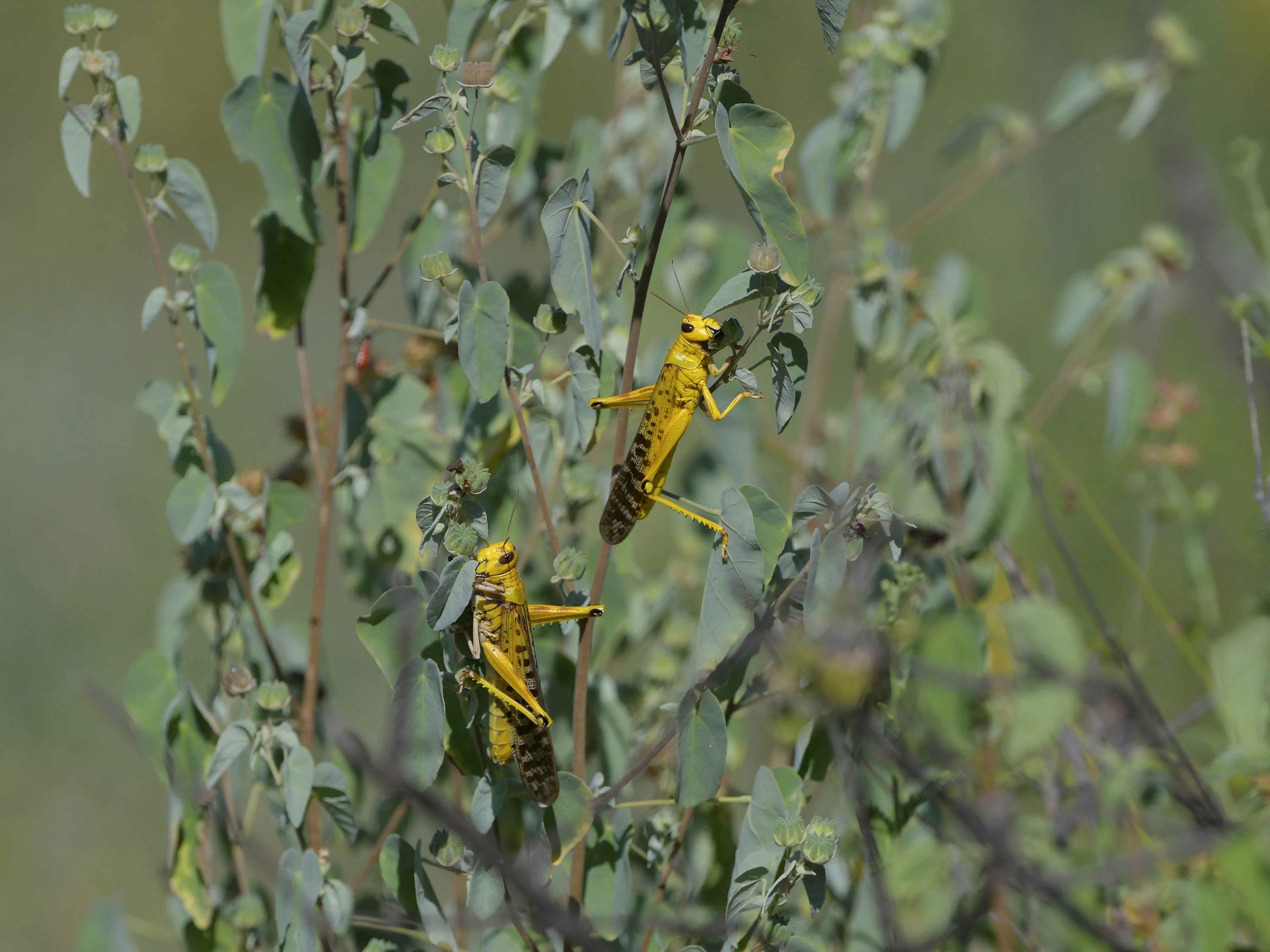 A member of the grasshopper family, locusts begin life as reclusive and posing no real threat to food security. According to experts, they change state as an adaptive strategy that allows them to move out of areas where food supplies have depleted

While the start of the year saw COVID-19 send panic across the globe, another crisis was brewing in East Africa. From December 2019 to spring 2020, a plague of locusts – the largest the region had seen in generations – swept across the region, from the Horn of Africa to the deserts of Kenya, decimating the crops that feed tens of millions of people. Kenya hadn’t faced a plague this severe in over 70 years, and Ethiopia and Somalia not in a quarter of a century.

“We gave Kenya more than 10 weeks of warning and they responded very quickly. But the magnitude of the problem has overwhelmed national capacity. It was just waves and waves of invasion,” said Keith Cressman, Senior Locust Forecasting Expert at the Food and Agriculture Organisation of the United Nations.

In one day, a swarm can consume 200 tonnes of vegetation. Once they’ve exhausted the resources of one region, they march relentlessly onto the next. They’re capable of covering hundreds of kilometres per day and have been known to travel across entire oceans. As well as threatening food security, this destruction can cripple already vulnerable economies. According to a paper published in the Journal of Orthoptera Research, it cost $450m to stop a desert locust plague that hit Africa between 2003 and 2005, causing $2.5bn of crop damage.

The most effective way to combat a locust plague is for hundreds of specially trained operatives to spray the hordes with insecticide. But even this military-style procedure isn’t enough to stop them completely. Most experts agree that our best hope for reducing the severity and frequency of locust plagues is to improve our understanding of the insect: once we can better predict their movements, we can strike before it becomes too late.

Bad behaviour
There are occurrences in nature that leave humans feeling utterly powerless. Being caught in the midst of a swarm of locusts is one of them. “It’s just a dark mass of moving insects that can almost block out the sun,” Cressman told The New Economy. Upsurges in locust populations are hard to control as they depend largely on the weather. Over the past two years, Africa has been battered by an unusually high number of cyclones; abnormal rainfall like this allows vegetation to thrive, providing a food source for the locusts. These conditions are also ideal for reproduction as locust eggs are more likely to survive when the sandy soil is damp.

But locusts aren’t voracious crop devourers by nature. A member of the grasshopper family, they begin life much like their better-loved cousin: green, reclusive and posing no real threat to food security. “They look so different from swarm-forming locusts, which are often yellow [and] black with red eyes, that, until the 1950s, they were thought to be a different species,” said Iain Couzin, Director of the Max Planck Institute of Animal Behaviour. “But in actual fact, it’s one organism that can switch dramatically from one state to another.”

Tonnes of vegetation consumed by a locust swarm in one day

Crop damage caused by the 2003-5 locust plague in Africa

One question that has plagued researchers for generations is why locusts suddenly change state in this way. It’s an important question because, before they enter their gregarious form, locusts are relatively harmless. Couzin, who has been studying the behaviour of locust swarms for years, has discovered it is an adaptive strategy that allows locusts to move out of areas where food has depleted. “If you put a human in the desert with limited landmarks and you track that human with GPS, they’ll walk around in circles,” said Couzin. “But with locusts, they all start marching in unison. Individually, they’re very error-prone, but together, they average out these errors. This means they move in a very directed way out of nutrient-poor areas.”

Cannibal critters
In his research, Couzin also uncovered a more sinister reason for locusts’ swarm-forming behaviour. Locusts have a very carb-heavy diet, feeding largely off of plants and grains. However, they need protein to grow. This is naturally rare in the environment, leaving locusts with one option when crops run out. “Other locusts are, of course, a perfectly packaged source of all the different proteins and minerals they need,” said Couzin, “and so when they all fall on hard times, they’ve evolved to turn on each other and cannibalise others.”

This locks the locusts into a morbid game of cat and mouse, whereby one locust is continually fleeing from another while chasing the locust they’ve chosen as their prey. Soon, they form a swarm, adding more locusts to the frenzy as they go.

“It is literally a behavioural epidemic,” said Couzin. “They start moving through the landscape and then any solitary individual they interact with, they have the potential to infect with this behavioural change. The sight and smell of a gregarious locust cause them to also turn gregarious. And so it’s like a wildlife that builds and builds.”

For Couzin, understanding this Jekyll-and-Hyde-esque behavioural change is the key to fighting locusts. “If you don’t know what causes disease, how can you mitigate it? If you don’t understand what DNA is, how do you understand genetics?” he said. “Having a basic understanding of the primitive nature of an epidemic phenomenon is a prerequisite before you can do anything.”

The devil you know
Once a swarm has formed, little can be done to stop it. As Cressman explained, the only real option is to carry out aerial operations and keep “hammering away” at them. “You’re not going to kill every single last locust – that’s not the objective,” he said. “The objective is to reduce these populations down to a level that is manageable.”

Scientists have endeavoured to come up with more innovative solutions. A new microbial biopesticide called Green Muscle is a plant-friendly alternative to the insecticides currently used against locusts. Some have also suggested genetically modifying crops to make them less appealing to the insects, but Cressman is dubious of how effective this would be. “They will eat absolutely everything,” he told The New Economy.

Forecasting and preempting the emergence of swarms remains the best bet for mitigating them. As Couzin’s research demonstrates, weather patterns and changes in vegetation give a good indication of when locusts will swarm. In many countries, meteorological offices share climate and weather data with locust-control offices set up to forecast infestations. East Africa has established a regional body called the Desert Locust Control Organisation for Eastern Africa, but according to the scientific journal Nature, the organisation is owed more than $8m from countries that have been unable to pay their membership fees. Limited funding presents a major challenge to fighting locusts, which is why emergency funds from international organisations like the UN are so critical.

However, the window for action is narrow. It can be difficult to secure funds from international bodies before the threat has materialised, but leave it too late, and the swarm could spread. This makes locust plagues uniquely challenging. “A locust emergency is probably the most complex that agencies like the UN have to face, in the sense that it’s a dynamic rolling emergency,” said Cressman. “It’s not like an earthquake or a typhoon or a cyclone or hurricane. It’s not a one-time event.” International agencies need to be just as dynamic if they have any hope of tackling this rapidly spreading disaster.