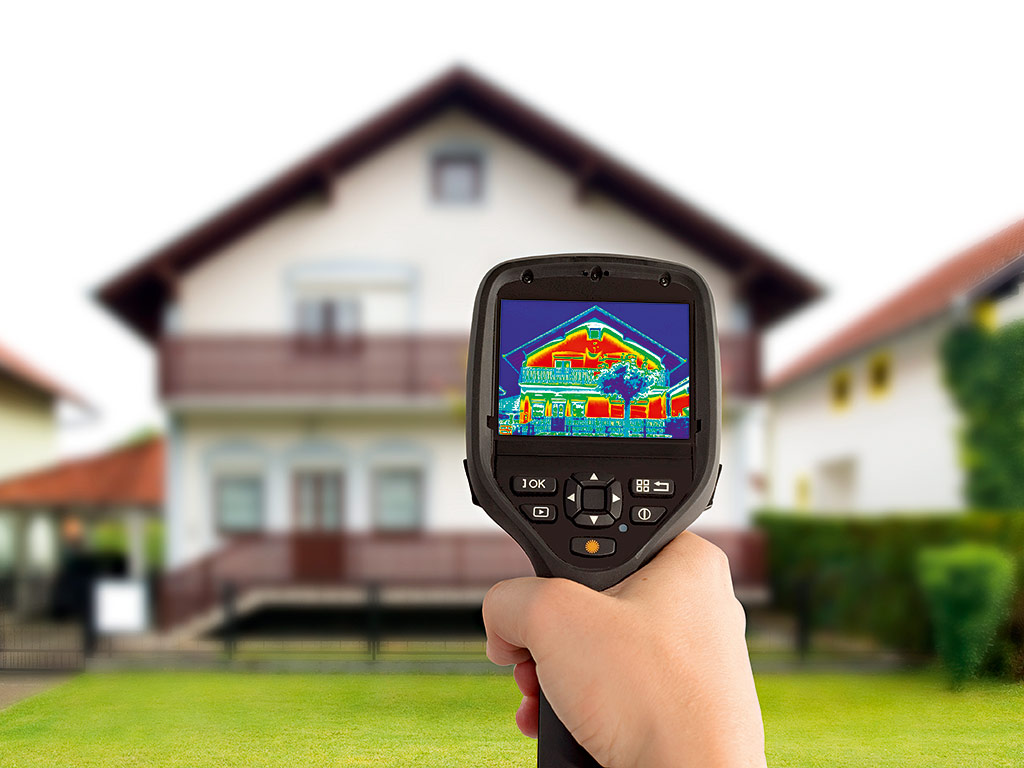 A heat loss detection device used with an infrared thermal camera. Demand for these types of products has led to a substantial decrease in price, making thermal imaging technology more widely available

New technologies are brought to market faster than ever before. Sometimes new products are quite expensive in the introduction stage, but, once the early adopters have embraced them and once they can go into mass production, prices go down rapidly. One example is the mobile phone: bulky and expensive in the beginning, it has rapidly become a product that fits in the palm of the hand and is used daily by millions of people.

The origins of thermal imaging
Whereas a normal camera is dependent on light to produce an image, a thermal imaging camera – sometimes also called an ‘infrared’ camera – is able to pick up minimal temperature differences and convert them into a crisp thermal image. In contrast to other technologies, thermal imaging can see in total darkness, needing no light at all.

Swedish company AGA, today known as FLIR Systems, developed the first thermal imaging camera for the military in 1958. The first commercial infrared camera was developed in 1965 and was used for power line inspections. It took until 1973 for the first ‘portable’ battery operated infrared camera to be introduced. The technology at that point in time required the camera be filled with liquid nitrogen to cool down the infrared detector integrated in the system.

In 1997, the uncooled thermal detector, also called the ‘microbolometer’, arrived. This detector has no moving parts and is therefore less susceptible to breakdowns. It is also less expensive to produce, which allowed thermal imaging camera manufacturers to bring the price of their products down.

The microbolometer enabled the technology to make its way into commercial industrial applications. The first to discover the benefits of thermal imaging were big production companies, which quickly learnt thermal imaging could give valuable information about electrical equipment.

Fuses, connections, cables and high voltage equipment such as transformers and power lines can all easily be inspected with a thermal imaging camera. The advantage is thermal imaging can help maintenance managers see an anomaly before a real problem occurs, and, as a result, avoid costly breakdowns.

Within the same companies, R&D departments became enthusiastic about thermal imaging technology. The cameras can be used early in a product design cycle. In the development phase, before going into mass production, appliances are thoroughly tested. Thanks to infrared, companies can shorten the development phase and start getting a rapid return on their development investments.

High volume production
Thanks to an increased use of thermal imaging technology by industrial companies, the first careful steps to so-called volume production could be taken. A few years ago, BMW – one of the major automobile manufacturers in the world – decided it would implement a thermal imaging camera for driver vision enhancement into its top-of-the-line Seven series. Since a lot of accidents happen during nocturnal driving, BMW was looking for a solution to reduce the number.

Volume production, however, was not solely driven by consumer goods. Unmanned Aerial Vehicles are becoming more and more common in military and civilian operations. These radio-controlled planes can be equipped with video cameras that are downlinked to a ground station. The military was the first to realise thermal imaging, allowing the aircraft to fly in total darkness and detect targets through smoke and clouds. Civilian applications quickly followed, and today the same aircraft is also to detect such areas of concern as forest fires.

Increased applications
Now volumes are going up and prices are coming down, more and more applications for thermal imaging cameras have started to emerge.

Ship captains need to navigate during the night. The costly vessel, its passengers, cargo and crew need to be protected. With thermal imaging cameras, captains can clearly see channel markers, shipping lane traffic, outcroppings of land, bridge pilings, exposed rocks, other vessels and any other object that might damage a ship when undetected in total darkness.

Installed on a ship, a thermal imager can save lives as well. Finding a person who has fallen overboard within the shortest possible time frame is of the utmost importance. Thanks to thermal imaging, the drowning person can quickly be located and helped out of the water.

People can easily be located in a smoke-filled room. The ability to detect temperature differences of objects is vitally important to firefighters, who must often open doors that lead to fires, or who identify the seat and extension of a fire quickly and reliably. FLIR’s handheld thermal imaging cameras have proven an excellent tool when used by experienced and well-trained firefighters.

Thermal imaging is also making its way into more and more security and surveillance applications. Whereas it used to be the privilege of border patrols and other government-related agencies to use a thermal imaging camera, today more and more industrial facilities – as well as residential owners – are using the power of thermal imaging to protect their valuable assets against theft, vandalism or – even worse – terrorist attacks.

The police and other law enforcement agencies use thermal imaging to find and follow suspects in total darkness. The main task of Search and Rescue professionals is to find people who are in distress, lost, sick or injured.

Either in a remote or difficult to access area, such as mountains, desert or forest, or at sea – whether close to shore or not – thermal imaging is essential. The cameras are sometimes mounted on helicopters flying over the scene. A thermal imager detects human activity in otherwise remote areas so the victim can be found before it is too late. A thermal imaging camera can do this on the darkest of nights, on land, in the air or at sea.

Daily use of thermal imaging
We have become increasingly conscious of energy consumption. Global warming is caused largely by pollution related to burning fossil fuels to heat buildings. Therefore, more and more countries are setting up legislation to inspect buildings on a regular basis for heat loss. A thermal imaging camera is an easy-to-use tool for making insulation defects and other building anomalies visible. It is probably just a matter of time before every building will be inspected with a thermal imaging camera.

Many companies specialise in transporting and transforming industrial gases and chemical compounds. Yet most of these ingredients are invisible to the naked eye: this is not the case for thermal gas imaging cameras.

They offer a number of benefits compared to traditional ‘sniffers’: they scan a broader area much more rapidly and in areas that are difficult to reach with contact measurement tools. Infrared displays a leak as a plume of vapour in the infrared image. Thanks to early leak detection, severe damage or even the loss of human lives can be avoided.

A recent evolution is the use of thermal imaging for traffic monitoring. Traffic managers all over the world are starting to use thermal imaging cameras to monitor and manage traffic streams. Be it for monitoring motorists and pedestrians in urban areas, for detecting incidents on highways and in tunnels, or for traffic data collection purposes, thermal traffic camera systems can enhance traffic safety and mobility.

One of the latest innovations is the FLIR ONE, a case for the iPhone 5 that gives smartphone users a thermal view. This will allow users, for example, to see at night or spot insulation leaks with their smartphone. As thermal imaging cameras are finding their way in more and more consumer-orientated applications, the interest for the product will rise, production volumes will go up and prices will come down.

Where this will lead, nobody knows. But chances are high that, within a very short time frame, every police officer, firefighter, security guard, and car, truck, train or other vehicle, will have their own thermal-imaging camera.