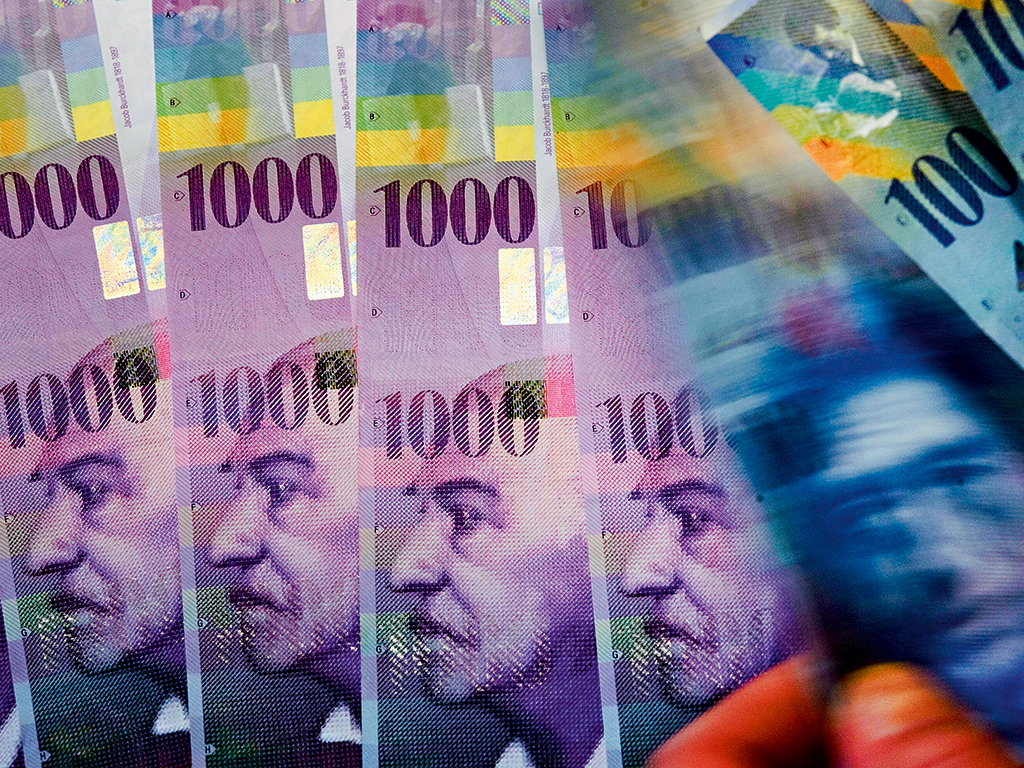 Swiss franc notes (above). Critics argue unconditional basic income will give people money for no cause

It’s hard to take issue with a concept that boasts equality for all and the ability to ensure a job for everyone by enforcing an unconditional basic income (UBI). In principle, the idea of giving people money, unconditional of age, employment and location, is an appealing one. At a time when youth unemployment has skyrocketed in Europe, proponents of UBI argue it provides all members of a society with the means to be truly free and will therefore bring about changes in the job market that will close the inequality gap. This is particularly pertinent as many graduates are forced into irrelevant jobs and the gap between poor and wealthy continues to grow.

To this end, a referendum has made it to the very top of Switzerland’s democratic system. Similarly, citizen initiatives are petitioning EU parliamentarians for a cross-European implementation of UBI. Even though the European Citizens’ Initiative for an Unconditional Basic Income hasn’t managed to achieve the necessary one million signatures to bring UBI to parliament, it is a startling indication of the lengths to which the people of Europe are willing to go in order to change the jobs market.

But what’s more startling is the lack of criticism of UBI. With the debate reaching EU heights, it would be wise to first examine all the possible issues related to an UBI, before heralding it as the solution to all of Europe’s economic woes.

First, advocates suggest UBI would further entrepreneurialism and career enhancement by giving “the real freedom to pursue the realisation of one’s conception of the good life”, as Belgian philosopher Philippe Van Parijs has argued. They also argue a UBI will give workers bargaining power, making it easier to command a higher salary and better benefits from employers. However, the economic effects of a basic income are debatable. Critics say employers have little obligation to pay a living wage if the government is sending a supplemental cheque every month. Others argue UBI would disincentivise work, prompting younger age groups to leave the workforce if they are able to receive money for no cause.

Not economically feasible
More importantly, the case for UBI fails most financial feasibility tests. It would have to apply to everyone in order to replace social welfare benefits, and an amount high enough to support people at an adequate standard of living. If this were to be implemented in the debt-ridden eurozone or the US, it would also require a major increase in taxes. This is not something most voters are willing to support, as the increase in average and marginal tax rates would have a disincentivising effect on a large bulk of earners because they would retain far less of any additional money they earned.

In addition, higher taxes are discouraging to innovation and businesses, which may be prompted to move elsewhere, outside a UBI zone. Alternatively, if a UBI payment were to be small enough to be financed by existing tax rates, it could lead to mass starvation and poverty increases in conjunction with payments going to those in no need of assistance. A compromise would increase poverty and reduce incentives to work, all in one package. This is a cure that seems worse than the disease.

It’s also worth questioning the overall effect UBI would have on a regional or national economy. Countries would be implementing a type of subsidy that might make welfare obsolete, but which would cost billions. Few supporters of basic income have been able to prove it would be less costly for states to implement than existing welfare offerings, and, in a time of economic recovery, it seems utopian to suggest states have the economic capacity to implement a system that requires broad-based, constant funding.

What’s more, a basic income could have a detrimental impact on inflation. When guaranteeing jobs, the effect tends to be deflationary, because it depresses
wages. Conversely, a universal basic income free of sanctions and restrictions would push wages upwards, and have an inflationary effect.

Inequality will continue
Another argument for an unconditional basic income is that it would potentially discourage welfare immigration, with citizens crossing borders in order to gain access to subsidies issued in nearby countries. This type of welfare tourism is particularly common within the EU, where countries such as the UK, France and Sweden are growing increasingly concerned over the level of immigrants arriving from poorer EU states. If UBI were to be implemented across the EU, protagonists suggest welfare tourism would halt, as everyone would have the same basic income. Yet this is not realistic given ongoing disparities in overall GDP, personal income and cost of living across EU countries. In order for it to counteract welfare tourism, a UBI would have to be entirely universal and, as such, only offer the same level of income in the UK as it would in Greece, for example.

However, this does not account for differences in cost of living, or whether or not a state would even be able to afford the same level of UBI as another state would. Champions of the scheme often refer to pilot projects and research done in India and Canada, which have proven the positive effects on employment and life quality when UBI is implemented in a small society. However, such findings do not prove the effects such a system would have on a diverse, city society, for example, and it doesn’t account for varying income levels. Average income in India is set at £1,500 – far below the £25,000 plus for the UK. The means necessary to sustain UBI would therefore vary depending on population size and cost of living, and, as such, it is not realistic to envision a universal basic income across borders. Disparities would be inevitable even after UBI is implemented, and so inequality would continue.

“One of the prominent standard arguments in the Danish debate against basic income is that it is simply morally wrong to allow able-bodied people to live on public transfers without doing anything in return,” explain Erik Christensen and Jørn Loftager in their report Ups and Downs of Basic Income in Denmark.

Christensen and Loftager also argue basic income could work to keep individuals away from the labour market. “The worry is that basic income would contribute to existing marginalisation forces within society, and create a dependency upon the state that could detract from the individual autonomy of people receiving the money,” they said.

An unconditional basic income discourages career progression and innovation, could potentially have detrimental economic effects and relies on a non-binding social contract. This leaves many questions unanswered on the possible effects of UBI, suggesting a basic income is not so much a solution to all our problems, but a utopian nightmare we’d do best to wake up from soon.