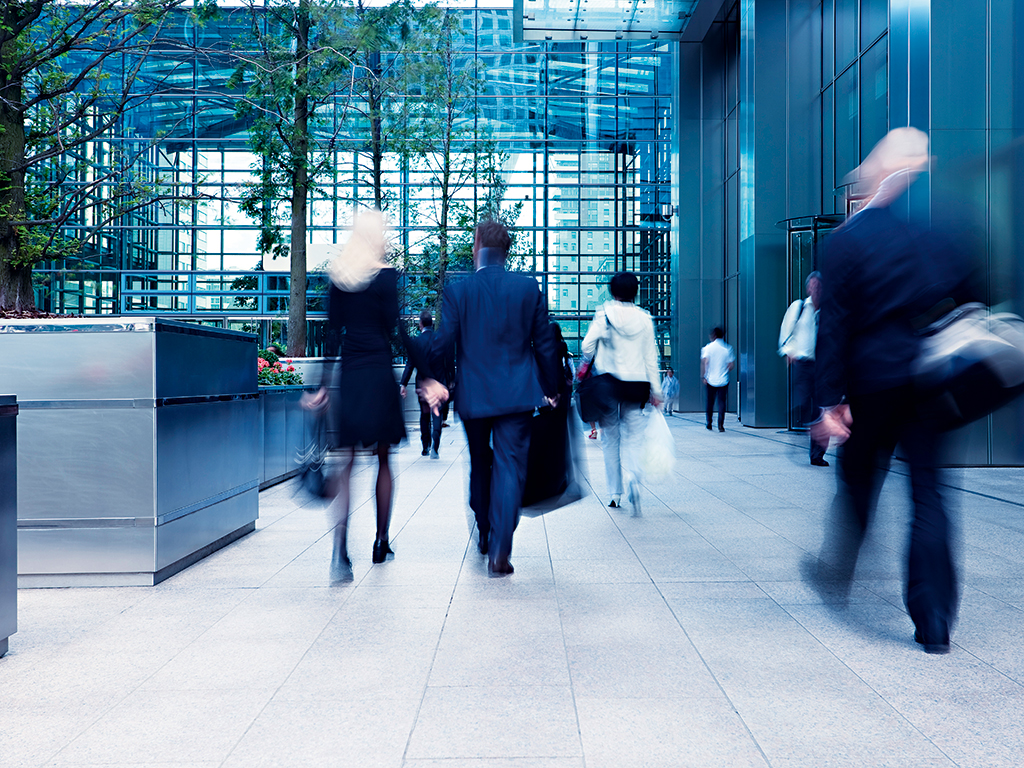 Walking meetings, four-day weeks and flexible working hours are just some of the productivity initiatives organisations have implemented to boost their employees' motivation

of office hours are spent dealing with internal emails

of workers claimed a four-day week made them more productive

When The Guardian reported in April that a radical new law would ban French employees from checking work emails after 6pm, the Anglo internet community erupted in dismay, reverting to the national stereotype that the country’s workers were ‘lazy’. The report was promptly discredited by the French press, but that doesn’t mean some companies aren’t using similarly radical workplace initiatives, designed to boost that most sacred of business tenets: productivity.

Corporate culture is seen by many as stale, with bosses strictly abiding by the belief that long hours will bring greater financial rewards. The results of the 2014 National Study of Employers did little to dispel this – a paltry three percent of employers questioned allowed “all or most” of their employees to work from home frequently.

However, exciting initiatives from forward-thinking bosses are stirring up rumours that the world of business is more dynamic than it ever has been. So, if you’re looking to shake things up in your workplace, here are some of the more radical productivity initiatives.

One of the more extreme productivity initiatives is a four-day week. Understandably popular, a shorter week is believed by some to not only enhance productivity but also yield macroeconomic benefits when employed on a national scale. The arguments are that workers are more motivated to work, and more likely to spend on a three-day weekend, while businesses are saved the costs that come with running for a fifth day. As simple as this may seem in theory, the vast majority of businesses are yet to be convinced. The system has been trialled by a number of companies and governments: among the most notable is the state of Utah, which implemented a four-day week for 18,000 of the state’s 25,000 workforce at a month’s notice. Of the 18,000 individuals affected, two-thirds claimed it made them more productive, while one in three state inhabitants believed the scheme actually improved access to state services. In addition, the arrangement eased congestion on the roads and made the commute easier for the remaining workers, in effect cutting emissions by 14 percent. Mainland Africa’s smallest country, Gambia, also implemented a four-day week for public sector workers, to allow more time for prayer, social activities and agriculture.

These days, businesses are expected to be transparent. Companies across the world have taken pains to distance themselves from a longstanding tradition of secrecy and foster a culture of openness. Some have gone so far as to disclose everything about their dealings, including the salaries of every employee. This is a radical departure from the generally accepted policy of pay privacy, but companies such as KnowledgePay, SumAll and Buffer reckon it’s an effective means of boosting morale. Generation Y employees came of age in the digital era, when privacy is perhaps not as closely guarded as it once was: increased disclosure seems a natural progression for young businesses. “Organisations have to face it,” says Chris Kelley, founder and Chief Executive of the compensation advisory service KnowledgePay, “compensation is no longer a secret.” Those in favour of increased transparency argue it brings with it trust and motivation, and does away with the possibility of privacy breeding inequality. “After all, how can you know you are being discriminated against if you can’t discuss your pay?” says Linda Barrington, Executive Director of the Institute for Compensation Studies at Cornell University.

Doing away with managers

Another radical approach that has been employed by a few forward-thinking enterprises is doing away with the customary command-and-control structure entirely by ridding the firm of management positions. The approach marks a complete departure from the conventional corporate structure and sees employees becoming more accountable for the work they do and the decisions they make. Those employing this particular structure, such as the video game development and distribution company Valve, and online shoe and clothing store Zappos, see it as a means of boosting employee flexibility. Instead of managers delegating jobs to individuals, employees are free to choose from a database of tasks and take on the ones they feel best equipped to manage. The no-management approach is founded on the principle that businesses should employ workers who are capable of looking after their own workload, and require little in the way of managerial oversight. While the structure may well be less cohesive than a traditional one, various case studies show that it boosts both motivation and productivity. What’s more, with a flatter organisational structure comes a valuable departure from traditional workplace dynamics, where most strive to take a step up to a more senior position. As a result, the absence of management positions could get rid of the backstabbing and office politics that so often arise among those climbing the corporate ladder.

In some organisations, internal emails account for three quarters of email traffic, forcing employees to comb through masses of often-meaningless information for fear of missing that vital titbit. What’s more, research conducted by Atos Origin recently found that, on average, employees spend 40 percent of their working week dealing with emails from colleagues. Realising this, some companies have opted to outlaw internal emails, either temporarily or permanently, to boost productivity and scale back time-wasting. To the surprise of sceptics, those partaking in these schemes have often found that workers tend to be more deliberate and direct in the way in which they communicate problems. IT services company Atos, for example, was heavily criticised when CEO Thierry Breton announced such a plan in 2011, but its ‘zero email initiative’ has yielded positive results and inspired many executives to follow suit. Ryan Holmes, Chief Executive of social media management tool Hootsuite, believes email is an “unproductivity tool” and sees in-house social media interfaces and instant messaging, which replicate face-to-face conversation more closely, as the way forward for enterprising companies. His stance is understandable, given firms such as his are the ones that look most likely to profit in the event of such a shift away from email.

Most of us spend 40 or so hours in the office each week, more or less equally divided between each day. However, many companies are now beginning to acknowledge the fact that employee productivity rates vary extraordinarily from day to day, and that the best approach may be to build more flexibility into the work schedule. “Flexible working can be viewed as making work into an activity, rather than a place you go,” says a spokesman for telecommunications provider O2, who introduced flexible working a few years ago. The argument is that managing a workload is made far easier when people are given a greater degree of flexibility. Last year, 22 of Britain’s biggest companies signed a commitment to flexible working rights after finding the policy could potentially cut costs by 13 percent. Nonetheless, many remain unconvinced by the idea, knowing that it requires a large amount of coordination and communication to implement and maintain. Some organisations, Yahoo and HP included, are concerned that flexible working hours reduce face-to-face communication, which could stifle creativity and collaboration. Compounding the uncertainty is that, for every study that shows the benefits of flexible hours, there is another that argues the opposite. The policy should not be seen as a fix-all method of cutting costs, and what’s clear from the flexible hours debate is that a lot depends on the specific organisation and individuals in question.

No working from home

Couple huge technological strides with lengthy commuting times and it’d be reasonable to assume that the number of those working from home has increased. The Telework Research Network estimates the number of workers based at home will increase by 63 percent over the next five years. Therefore, when Marissa Mayer, the CEO of Yahoo declared early in 2013 that she would effectively ban working from home, employees came forward in their droves to criticise the newly appointed executive. The overriding complaint was that Mayer’s decision failed to take into account the flexibility that had made the tech sector so great. She responded that: “Being at Yahoo isn’t just about your day-to-day job, it is about the interactions and experiences that are only possible in our offices.” Many managers argue that bringing people together in one place fosters a greater spirit of creativity and allows collaborative thinking. Mayer cited the Yahoo weather app as an example of the importance of workplace collaboration, as it was created by two engineers working in the same space. The company has since posted impressive results and many of Mayer’s most vocal critics have been forced to concede that they may have been wrong. Some chief executives, such as HP’s Meg Whitman, have gone so far as to introduce similar policies.

The importance of health and wellbeing in boosting productivity has been made clear by multiple sources over the years, but a new study by researchers at Stanford University has shown an unusual way of increasing output. Evidence put forward by the group suggests ‘walking meetings’ can increase creative output by as much as 60 percent, and talks in detail about the relationship between walking and creativity. “Walking opens up the free flow of ideas, and it is a simple and robust solution to the goals of increasing creativity and increasing physical activity,” says the report, co-authored by Marily Oppezzo and Daniel Schwartz. This is not to say all office appointments should be scheduled to take place in the park, but it does shed new light on the ways in which we are mistaken in setting the stage for productivity. No doubt, many in the corporate world would assume a productive meeting is best held in a specially kitted-out conference room with comfy seats and state-of-the-art technology. However, these new findings show the extent to which our thought processes are linked to our physical movements. “Whether one is outdoors or on a treadmill, walking improves the generation of novel yet appropriate ideas, and the effect even extends to when people sit down to do their creative work shortly after,” says the Stanford report.