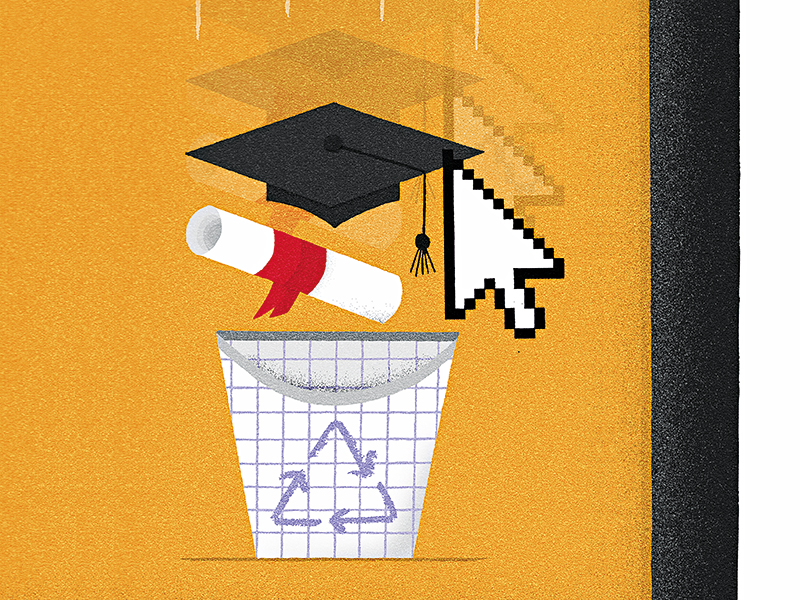 With more people attending university than ever before, degrees are becoming increasingly irrelevant

Recruitment is a fundamental component of any company’s success, and failing to identify the right people can prove extremely costly. In the short term, losing an employee early into their tenure can result in the employee absorbing expensive training with little reward, while the company foots the bill. But perhaps more concerning are the long-term effects of bad recruitment: a business that fails to hire bright, forward-thinking workers will see its productivity and capacity for innovation suffer over time.

A 2013 survey by US recruitment platform CareerBuilder found that, of the 6,000 employers surveyed, more than half in the world’s 10 largest economies reported suffering significant losses as a result of a bad hire. Further, a staggering 27 percent of US respondents reported at least one instance of a bad hire costing the company $50,000.

This figure was echoed in Europe, with 29 percent of respondents from Germany and 27 percent of those from the UK reporting similar figures. But while the costs of recruiting the wrong people are clear to see, it’s not always quite so obvious how to avoid such pitfalls.

Evaluating the market
When identifying new recruits, employers have typically looked to individuals with a similar mix of skills and personal qualities as their existing members of staff. These qualities often include problem solving, teamwork and self-motivation. Unfortunately for employers, these characteristics are surprisingly difficult to test for.

In order to address this issue, firms have traditionally focused on hiring graduates, using degrees as a proxy for intelligence and hard work. However, with more people attending university than ever before, degrees are becoming increasingly irrelevant, and employers are turning their attention to bespoke online tests instead. In June, Unilever revealed it had spent the last year using AI to assess candidates while they played online neuroscience games.

Meanwhile, many large companies with reputations as graduate-only employers – such as Google, Ernst and Young (EY), Penguin Random House and Apple – have done away with the need for degrees altogether. But if choosing graduates doesn’t work, firms now face the question of how best to identify potential employees – for many, this means turning to online recruitment tests.

Online recruitment tests can come in several forms, with each designed to identify specific areas of a candidate’s personality and skill base. For example, numerical and logical reasoning assessments function as mini IQ tests, while personality tests aim to anticipate how candidates will adapt to their new working environment. More recently, employers have looked to strengths-based recruitment tests: multiple-choice questionnaires that try to gauge whether a candidate’s personal motivations align with the firm’s, and determine whether they are capable of performing the work expected in the role advertised.

EY was an early adopter of the strengths-based recruitment process, ditching the requirement for an undergraduate degree from its entrance criteria in 2015. Speaking to The New Economy, EY’s Head of Student Recruitment (UK), Dominic Franiel, described the decision to drop degrees as the result of almost a decade spent fine-tuning the recruitment process: “When we launched our revised selection process [in August 2015], it was the result of many years worth of validation, really dialling up the areas that we knew were predictive of future success [and] placing extra emphasis on those based on the online assessment.”

Fair assessment
Franiel believes employment tests do more than simply help employers spot candidates with the most potential: he has suggested their lack of bias may also present a useful tool in the fight against discriminatory hiring practices. “The approach we’ve taken – by having multiple assessments – allows us to be very objective in that screening decision,” Franiel said. “From a candidate’s perspective, it’s a much fairer way of being assessed and considered, because you have the same opportunity as any other candidate who applies.”

Another practical reason companies are starting to favour online testing is cost: since these tests are often multiple choice, marking can be automated, presenting a more cost-efficient way of whittling down the stacks of applications graduate employers receive each year. “When you’re a volume recruiter and you’re dealing with tens of thousands of applications, it gives you a very early cut, a very early indication of a candidate’s potential,” Franiel said.

But with bad recruitment practices often costing firms in the long term, simply finding an economical way to filter applicants isn’t enough, and online tests must be effective as well as cheap. Franiel believes online tests, especially those with similarities to IQ assessments, really aren’t so different from degree qualifications: “There is certainly a correlation between UCAS points and the scores in our numerical reasoning tests.”

Since online tests are often multiple choice, marking can be automated, presenting a more cost-efficient way of whittling down the stacks of applications graduate employers receive each year

This is also true, to some extent, of less academic strengths-based tests. The personal qualities Franiel lists as a good fit for the company – things like being self-motivated, taking pride in your work and picking things up quickly – are also those prized in a university setting. “If you think about your top performers in academia at university, you’d probably expect to see some of the similar behaviours being demonstrated,” he said.

Test of time
In terms of broadening access, the five different tests now used in EY’s application process allow multiple data points to measure how well it is working. “We run adverse impact analysis, looking at progression rates of different demographic groups throughout our selection process, and we see no adverse impact,” Franiel said.

“[This] is very reassuring for us, since [it] means it doesn’t matter if you’re male or female, of an ethnic minority, or a lower socioeconomic group – your chances of success are equal in those assessments.”

The strengths-based testing process also benefits from its adaptability; with the criteria for a successful hire continuously being reassessed, tests can be tweaked to reflect the latest requirements. “We’re very careful when we assess our test benchmarks not to necessarily rely on what we think looks good within the organisation currently,” Franiel said.

“As part of that periodic validation, we ask a broad range of individuals, including our current graduates and our current apprentices, to self-identify what they think are the traits they need to be successful. If you were to look at the graduates recruited five years ago, they could have a very different profile to those recruited a year ago.”

It’s perhaps still too early for EY to measure the success of this ‘no degree’ approach in full, but the signs so far are promising. In a broader industry sense, adopting this attitude may prove particularly useful to sectors facing a skills shortage. For example, online testing could help compensate for the dearth of qualified applicants in the tech sector, identifying individuals with the right combination of skills to succeed after receiving some on-the-job training.

As online testing is refined and employers gain a greater understanding of the data that tests produce, degrees will seemingly become a secondary consideration for hiring managers, who will instead look to the results of customised online assessments to identify candidates that can stand the test of time.