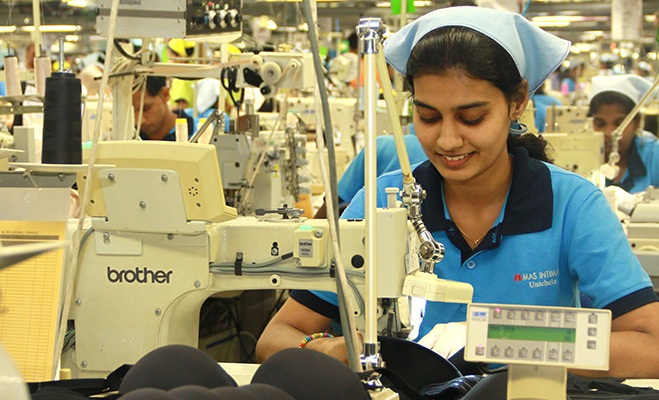 MAS Holdings is a Sri Lankan company with a 25-year tradition of excellence that has made it the preferred supplier of some of the world’s foremost fashion brands.  It is a company founded on an idea and resolve to be different. Yet it is more than this that sets the organisation apart: it is its endorsement of originality and creativity, and its encouragement of employees to embrace a culture of innovation and empowerment.

MAS has always differed from a traditional manufacturing company: from an unconventional product choice (lingerie was almost unheard of in South Asia in the mid-1980s) to superior working conditions: from ethical manufacturing practices to the relationship between management and associates.

MAS pioneered the art of intimate apparel manufacturing in the South Asian region. Today, it is one of Asia’s leading manufacturers of intimate apparel, sportswear, performance wear and swimwear, with an annual turnover of over $1bn. Their 41 state-of-the-art facilities, spread over 10 countries, provide employment to over 57,000 people.
Under the leadership of co-founder and chairman Mahesh Amalean, supported by a team of enterprising senior leaders, the company established its operating model around ‘new thinking’ in terms of product, process and people, which continues to be their key differentiator in a saturated global clothing industry.

Product, process and people
The company evolved from a contract manufacturer to a concept-to-delivery solutions provider, offering customers innovative and Speed services: it also transformed itself into a lean enterprise. In an industry that focused on cost cutting, the company differentiated itself through investment in three core areas: product, process and people.

Customers identify with companies that generate new ideas, ready to invest in the latest technologies, the right talent, and cutting edge operational and business processes. This principle also applied to the company’s partnerships: they collaborated with companies that were likeminded and open to constant change.

Since its inception in 1986, the empowered employee has been at the centre of the company’s organisational strategy. This has been achieved through platforms which are both operational and sustainable. The company’s aim is to nurture an associate who is not only exceptional in their job, but in their expected role in society as well.

MAS’s Women Go Beyond (WGB) programme was launched in 2003. It challenged the accepted norm for employment, generating a paradigm shift in a profession that was looked down upon as a ‘sweat-shop’ trade.  The women of MAS, who form the backbone of the operation, were recognised for their efforts and accomplishments: their success was celebrated and they were provided with opportunities to learn new skills.

Internalising lean manufacturing principles to the apparel industry through the MAS Operating System (MOS) brought operational empowerment and transformed the business into a lean enterprise. A culture has evolved in which each worker is responsible and has the authority to make decisions relating to themselves and their team’s success.

This shift in power has allowed the company to tap into a stream of innovation that is hindered in most organisations. Such measures contributed to the company’s steady growth during the global economic downturn in 2008 and 2009.

Building on innovation
MAS designated 2012 the Year of Innovation to build on the innovations, inventions and best practices within the group, and moved towards formalising the informal innovation ecosystem which evolved through the years. MAS has numerous patented technologies, products and processes.

MAS’s patented technologies have been applied in the 2008 Speedo LZR, the English and French Rugby jerseys for the Rugby World Cup 2011, and most recently in the performance-wear for athletes representing 12 countries (including the US and China) at the 2012 London Olympics. It is also the official clothing provider for Sri Lanka Cricket.

The company has a further seven technology patents pending.

The past five years have seen the company widen its focus beyond apparel to provide SAP-based IT solutions to the global apparel and footwear industry. It also owns Sri Lanka’s first international lingerie brand, Amanté. It has diversified through design and manufacturing to encompass lifestyle and fashion solutions.

Community endorsement has been MAS Holdings’ licence to operate. This has been strengthened by the organisation’s investment in the communities in which it operates.

Empowering women
Of the company’s total workforce in Sri Lanka, 90 percent are women, as are 83 percent of its overseas employees. In recognition of the need to address gender equality, 2003 saw the launch of the MAS Women Go Beyond programme. The objective was to make a difference in the lives of female employees and their families by fostering pride in their job and showcasing the employee as the true ‘value adder’ in one of Sri Lanka’s key revenue generating industries.

WGB aimed to acknowledge and support the many roles women play in society through focused initiatives for career advancement, work-life balance, skills development, and rewarding personal and professional accomplishment. The components include knowledge acquisition, awareness, leadership skills, and attitudinal and behavioural changes.

Due to evolving employee demographics and aspirations, and as a result of MAS becoming a signatory to the Women’s Empowerment Principles – jointly developed by UN Women and UN Global Compact – in November 2011, WGB aims to mainstream gender equality across the group by 2013.

In partnership with the International Labour Organisation, the issue of violence against women is being addressed and new interventions on gender-sensitivity for men in decision-making positions have been introduced. In conjunction with the UN, HIV/AIDS awareness workshops have also been re-energised.

In 2005, the company’s work was recognised by the American Apparel and Footwear Association for Excellence in Corporate Responsibility. In 2010, the divisional project Psychological Relief Through Counselling was judged the Best Project at the Ann Taylor Compliance Conference. 2012 brought further recognition, this time at Asia’s Best CSR Practices Awards in Singapore.

The WGB programme has been featured as an award-winning case study at INSEAD Business School and is a topic of study at local and global learning forums.

Sustainability and the next generation
MAS Holdings also lays claim to another world first: in 2008, MAS Intimates Thurulie became the world’s first purpose built eco-manufacturing plant. Working in conjunction with Marks & Spencer (M&S) ‘Plan A’, Thurulie was designed to have a low ecological footprint. Fully powered by renewable energy sources, the facility became the world’s first LEED Platinum certified New Built Factory by the US Green Building Council and was awarded the Globe Award for Sustainability Innovation in 2010. MAS has committed to mainstreaming green manufacturing elements at all group facilities within seven years.

The company’s sustainability focus has also extended to its products. MAS has been successfully managing a three-way project with Victoria’s Secret and Alok Industries on an organic, fair trade cotton partnership sourcing from Burkina Faso. The company again partnered with M&S to launch the world’s first carbon neutral bra in April 2011.  Each product was ‘foot-printed’, certified and made carbon neutral via ethically sourced carbon credits to offset the same.

In 2006, MAS Holdings launched MAS Eco Go Beyond, a community outreach programme with the support of the government of Sri Lanka, to raise awareness of sustainability among students. The company incorporated concepts from the United Nations Environment Programme, Youth Exchange Programme and the Consumer Citizenship Network’s LOLA toolkit to develop a sustainability curriculum for Sri Lankan schools.

In 2008, UNESCO used the outline of the Eco Go Beyond programme to develop the Education for Sustainable Development (ESD) Toolkit for the Asia Pacific region. UNESCO Sri Lanka recognised the company as ESD’s best partnership with the private sector in 2009. The Eco Go Beyond programme fosters an educated and activated youth community, who will in turn nurture sustainable livelihoods for themselves.

In its six years of operation, Eco Go Beyond has impacted over 17,500 students of the target 15-18 age group in 30 schools through a focused intervention, and indirectly their families and communities: taking sustainable development from an abstract concept to a way of life.

Investing in inspiration
Sport has a strong influence on MAS’s culture, be it for team building and recreation or for creating elite pathways for raw talent. Over 100 MAS associates have represented Sri Lanka at international meets in 21 sporting disciplines, among them four Olympians.  This has been supported by investments in sporting facilities and infrastructure in schools across the island to support the creation of opportunities for rural sporting talent.

With manufacturing facilities spanning the island, MAS is strongly committed to community building and re-building, with a particular focus on education and health infrastructure. Responding to the tsunami disaster in 2004, the company raised $1.8m.

The company invested $1m between 2009 and 2011 to upgrade the country’s health infrastructure: the largest private contribution in the country’s history.  With the end of a 30-year war, resources are being channelled to build factories, vocational training centres and hospitals in the areas that were affected.

MAS Holdings has assured its key stakeholders of its efforts towards environmental, economic and social sustainability. The group’s 2020 vision proposes strategies aimed towards an even stronger framework that would adapt to change.