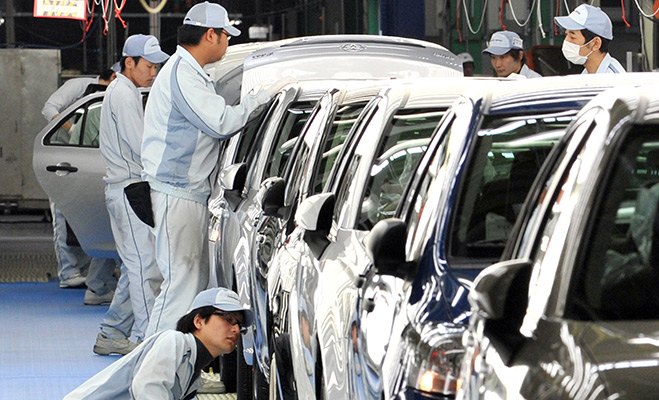 Despite reclaiming its spot as the world’s largest car manufacturer in terms of sales, Toyota had to recall close to 10 million vehicles in 2012. The latest recall involved 2.77 million vehicles worldwide across 13 models. The news was embarrassing for Toyota as one of the models recalled was the hybrid Prius, an icon of the company’s technical expertise and innovation.

670,000 Prii built between August 2003 and March 2009 were recalled in the US alone. The problems involved potentially defective steering and faulty water pumps. According to Brian Lyons, Toyota spokesman for safety issues in the US, the steering problem was “a design-related issue: insufficient hardness on the specification”.

This fault can cause spines or ridges on the steering shaft to deform and wear down, causing noise. In some cases, the car felt as if it had lost manoeuvrability even though this was not technically the case. The recall also involved fixing the Prius’s electric pumps, which cool the car’s hybrid system and batteries. If the cooling system fails, it can cause a shutdown of the entire powertrain, causing the car to stall.

With the latest problems coming so soon after the recall in October of 7.4 million vehicles due to a fire hazard caused by a faulty window switch, it is tempting to compare the situation to Toyota’s previous recalls in 2009-11. Those recalls, triggered by several vehicles experiencing unintended acceleration, were blamed for a series of crashes and road deaths in the US.

Toyota’s reputation was damaged and President and CEO Akio Toyoda testified in front of a Congressional hearing. In his testimony, Mr Toyoda admitted the company had expanded too quickly as it “pursued growth over the speed at which we were able to develop our people and our organisation”. In other words, safety may have taken a back seat in the interests of growth.

Limited damage
However, comparisons to earlier recalls are premature at best and alarmist at worst. Unlike the unintended acceleration incidents, the latest Toyota recalls did not come with any reports of crashes or injuries: although Toyota did receive some 400 complaints. It’s therefore unlikely that the recent problems will cause much long-term harm to the company. Recalls are common in the automotive industry.

Senior Analyst at BNP Paribas Koichi Sugimoto said: “Nobody is perfect. Vehicles nowadays are very complicated. The company is taking appropriate measures to fix the problems, so I don’t think this will cause significant damage to
Toyota’s reputation.”

Automotive analyst at Euromonitor International Neil King said: “Any long-term damage to the Toyota brand probably already happened with previous recalls. Any Toyota customers that are sensitive to recalls have surely defected long ago.”

In a 2010 Rasmussen poll, 59 percent of Americans still claimed to hold a favourable opinion of Toyota, including 22 percent who held a very favourable opinion of the company despite the negative publicity it had received. Toyota was also ranked 33rd overall in Fortune’s Most Admired Companies 2012 rankings and came 37th in Forbes’s Most Reputable Companies rankings.

Toyota recently raised its profit forecast to ¥780bn (£66m) after a 221 percent jump in profits over the previous year for the period of July to September. Its production capacity has recovered from Japan’s 2011 earthquake and tsunami, and the resurgent US automotive market has aided the company.

US industry sales for September were up 12.8 percent. Toyota outperformed the competition, posting increased sales of 42 percent for September in the US market. Among its top sellers was the Prius hybrid and, thankfully for the company, the recent recall did not affect the latest models of the car.

Consumer trust in Toyota’s cars stems from their reputation for reliability, despite these high profile incidents. Whatcar.com ranked Toyota as the second most reliable brand after Honda in its car reliability index. Toyota’s luxury brand Lexus came third in the same ranking.

Realiabilityindex.com gave the company third place in its ranking.

Bigger problems
Not all is rosy, however, as the company was forced to abandon its objective of selling a  million cars in China in 2012: anti-Japanese sentiment triggered by the Sino-Japanese dispute over the Senkaku Islands caused sales to plummet in the country. Sales in Europe are also down and are not expected to recover any time soon due to the current debt crisis.
Toyota’s main competitors are unlikely to capitalise on either of these markets, however. The European debt crisis has hit sales of Ford and GM hard, and the European Automobile Manufacturers’ Association reported a 7.1 percent decrease in automobile sales across the continent during the first eight months of 2012.

In China, now the world’s largest automobile market, the domestic automobile manufacturers are expected to capture 90 percent of consumers as the government plans to merge the top 14 domestic car producers into 10. A report into the automotive industry by Zacks Equity Research, concluded that the greatest potential for the industry lies in the development of ‘green’ cars.

Rising fuel prices caused by the Arab Spring, and increased environmental awareness are expected to drive consumer demand for green transport. In this area, Toyota and its competitor Honda already enjoy a clear advantage with their Prius and Civic hybrid models. However, other automakers have recognised the potential of a market due to represent 30 percent of sales in developed markets this decade and are honing in.

Having learned from the past, Toyota’s handling of recent recalls may win it praise rather than damage its reputation. Looking forward, the company will have to continue to innovate, especially in green cars, to stay ahead of its rivals, while avoiding the overzealous expansion it believes caused its previous problems.