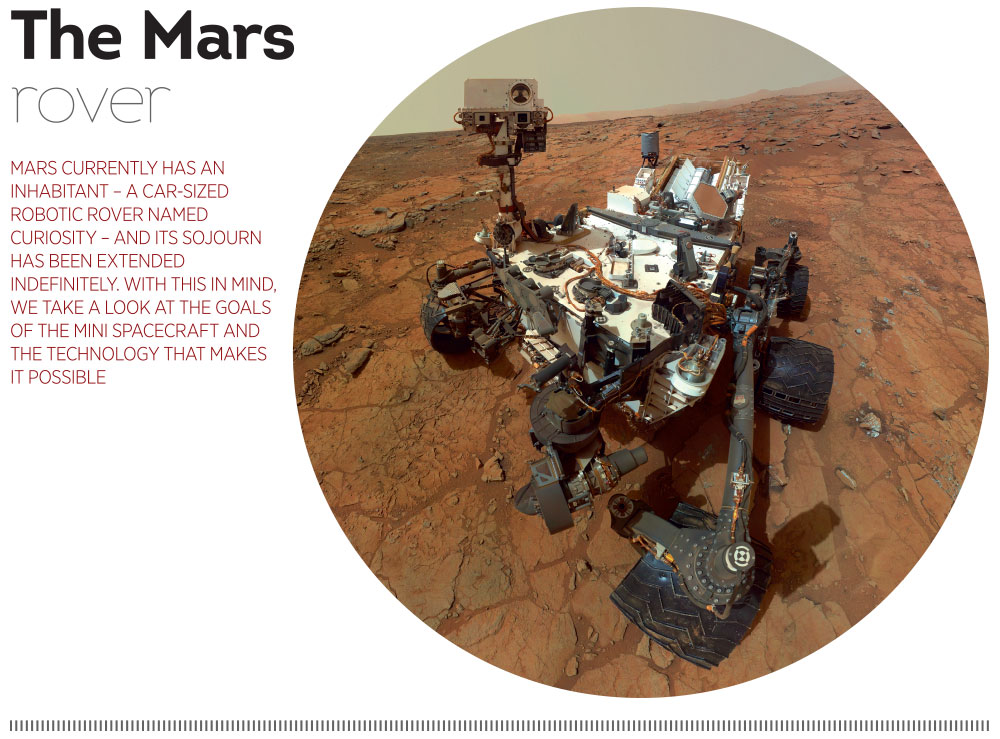 Curiosity was sent to the Red Planet as part of NASA’s Mars Science Laboratory mission (MSL). The robot landed 1.5 miles from its target site – in a location called Aeolis Palus in the Gale Crater – on August 6, 2012. Sent to reconnoiter the Martian climate and geology, the project has been an umblemished success thanks to co-operation between the international scientific community and its careful design.

Mass:
Curiosity has a mass of 899kg, which accounted for 23 percent of the mass of the MSL spacecraft – the rest was disregarded during the landing process. Scientific instruments account for 80kg of its overall weight. The rover is 9.5ft long by 8.9ft wide and is 7.2ft high.

Power:
Curiosity is powered by a radioisotope thermoelectric generator (RTG), which produces electricity from the decay of radioactive isotope plutonium-238 dioxide. The isotope is packaged into 32 cubes inside the robot. This generates 9MJ of energy each day. The RTG energises two rechargeable lithium-ion batteries to boost energy needs if the regular supply is not enough for the rover’s demands.

Heating System:
The temperature at the landing site ranges from -127 to 40˚C, so thermal monitoring of the robot is imperative. Its system warms the robot through electrical heaters placed on key components, passively through the dissipation to internal components, and by pumping fluid through 200ft of tubing. This fluid can also cool the robot if it becomes too warm.

Computers:
Curiosity has two identical onboard computers called the ‘Rover Computer Element’. Each contains radiation-hardened memory to tolerate the extreme radiation from space and contains 256KB of EEPROM, 265MB of DRAM and 2GB of flash memory. The computers use RAD750 CPU, capable of up to 400 MIPS. One of the two computers is a back-up, designed to kick in if the other falters. So far in Curiosity’s mission, the back-up system has been used only once.

Communications:
Curiosity has an X band transmitter and receiver that communicates directly with Earth. It has a UHF Electra-Lite software-defined radio for communicating with the Mars orbiters (Mars Reconnaissance Orbiter and Odyssey Orbitor), which is the main path for data back to Earth. Each orbiter can only communicate with Curioisty for 8 minutes per day. The rover has two UHF radios – signals to Earth take on average 14 minutes and 6 seconds.

Mobility:
Curiosity is equipped with six 50cm diameter wheels in a rocker-bogie system, which also served as its landing gear. The wheels have cleats and are actuated and geared independently so it can climb soft sand and hard rock. Each front and rear wheel can be independently steered allowing the robot to turn. Each wheel has its own pattern so its tracks can be monitored. The rover is capable of climbing sand dunes with slopes up to 12.5 degrees and can withstand a tilt of 50 degrees without overturning. It can travel 30 metres per hour at maximum speed.