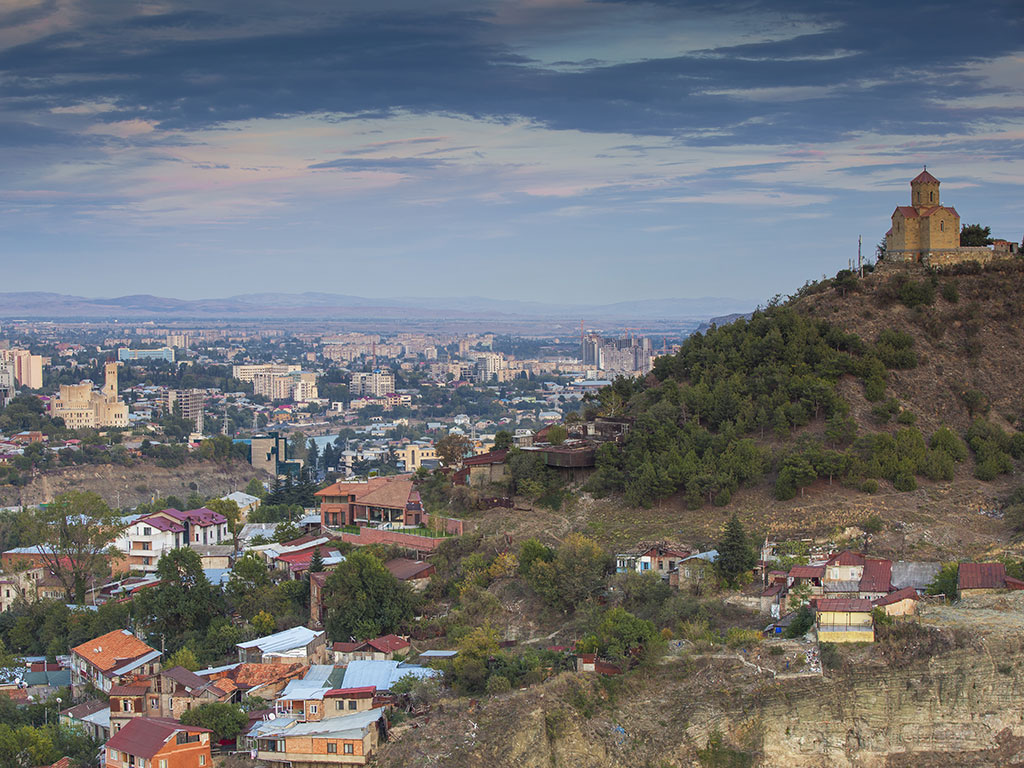 View over Tbilisi, the capital of Georgia. Oil giant Tethys Petroleum is considering the practicalities of hydraulic fracturing in the country, with focus on Maikop shale

With the shale boom having taken the US energy industry by storm over the past few years, many other countries have been looking at the technology used to expand their own energy production sectors. That is the case with Georgia, which, despite having a strong traditional oil industry, is looking at hydraulic fracturing (fracking) in the hope of tapping the potential resources hidden in its own shale region.

Tethys Petroleum is one of the companies pioneering the exploration of gas and oil in the Maikop shale, in the eastern region of the country. Dr David Robson, Executive Chairman and President of Tethys Petroleum, spoke to us about the challenges and practicalities of exploring the region, and why shale oil may be the golden opportunity the local industry has been waiting for.

What is it about Georgia that makes it a significant shale oil opportunity?
In Georgia, particularly in the east and central regions, there are outcrops of the prolific Maikop shale. This is the source rock for oil production in Azerbaijan and the Southern Caspian Sea, including Turkmenistan, as well as the North Caucasus fields in Dagestan and Chechnya. The zone is thick – over 2,500 metres in places – with a number of separate zones, and with the organic carbon content varying through the interval.

The Maikop also has a number of sandy and silty intervals through it, which provide the potential for substantial production in what could be a classic shale oil reservoir of the ‘hybrid’ type. This would be similar to – but orders of magnitude thicker than – the Bakken formation in North America, which is currently producing just under one million barrels of oil per day.

Although oil has been produced in Georgia since before the Second World War, the ability to produce commercial volumes from the Maikop has been limited by a lack of technology and understanding of production from low permeability zones and shales. With the application of modern hydraulic fracturing technology, as well as rock mechanics, geochemistry and geophysical technology, the areas of potential can be highlighted and the potential exploited. This has not been possible in the past.

How does the geography of this site differ from those in the US, where shale exploration is booming?
Geologically the area is somewhat different to the major shale plays in North America. The rocks are of different age and the tectonic environment of Georgia is that of compression closed during the collision of the African/Asian tectonic plate and the Eurasian tectonic plate. This causes significantly higher pressures (overpressures) in the rocks. These features result in different characteristics in the rock. However, the key feature of high organic carbon content maturity and the presence of thin, more permeable, layers is common to both areas.

Geographically, the area is somewhat more hilly than most of the areas in the US. These areas are low hills and relatively easily accessed, close to, but not within, population centres, making development relatively simple from a logistical perspective.

How can the area be commercialised?
The commercial viability of the Maikop shale, near Tbilisi, is still not proven. We will need to carry out additional work to confirm the high organic content of the shale, the most appropriate parts of the thick sequences to focus on, the thermal maturity of the sequence, the rock mechanics properties of the formation, and the best places to drill, utilising the seismic data to highlight the thickest parts of the basin.

In addition, work will be necessary on fracture design and methodology. This will involve a programme of work ranging from seismic – which we have already done – through geochemical and rock mechanic studies, and then test wells with hydraulic fracturing. Assuming these yield positive results, any programme of drilling across the area would then be undertaken with oil-gathering systems required to collect the oil and gas utilisation with gas probably being supplied to the local market.

It is a fallacy that hydrocarbon fracturing causes any environmental damage – provided, of course, the well is drilled properly in accordance with good oil field practice and that the fracture fluids or gases are disposed of correctly

The technology required to ascertain the commercial viability includes geochemical sampling, studies of the maturity of the rock from optical examination and computer-derived technology, pyrolysis (heating up the shale and ascertaining its organic properties), rock mechanic studies to ascertain brittle fracture, laboratory studies of the rock, petrography (to ascertain the type of clay minerals, which affect how much the rock ‘swells’, using visual, X-ray defraction and scanning electron microscopic technology), and, obviously, hydrocarbon fracturing technology to break the rock carrying suitable proppants to prop open the fractures.

As in other parts of the world, a specific fracking and development programme will need to be put in place. What works in North America won’t necessarily be the best for Georgia – techniques may be different in order to get the best production (for example, different ways of completing the well and different techniques of fracturing).

Some of these sites are close to population centres. What impact might a shale oil development have on the populations?
It is a fallacy that hydrocarbon fracturing causes any environmental damage – provided, of course, the well is drilled properly in accordance with good oil field practice and that the fracture fluids or gases are disposed of correctly. Therefore, the process of drilling the wells will cause minimal environmental disruption – although, after drilling, the need for a large ‘frac spread’, involving a number of pumping trucks to pump the frac fluid or gas into the formation to break the formation, is a fairly extensive operation, but of short duration.

Once the well is drilled and tested, either the well will flow naturally – in which case, only a small wellhead would be visible from the surface and the pipeline is buried – or else a small pumping unit involving a gas-fired generator (or power from the grid) or down-hole pump will be set up. The operation, of course, will provide local employment both directly and indirectly, and make a significant positive impact on the economy of a currently depressed area.

Are there any sites, aside from the ones we’ve previously mentioned, that you’re planning to explore?
As well as the unconventional targets we are pursuing in Georgia, in the same areas lie a number of conventional prospects of not unsubstantial potential. We will pursue these in parallel with our focus on the shale oil.

What are your predictions for the shale oil industry?
The shale oil industry will make a significant impact on world production of oil over the next few years, particularly with the decline of the major conventional fields in the Middle East and elsewhere. This will be part of a global fuel mix involving unconventional production of hydrocarbons, deep-water exploration and production, and potentially the exploitation of other hydrocarbon sources such as gas hydrates. This mix will fuel the global economy in the future.

Although the application of renewable technology is important, if the world wishes to maintain its current energy-intensive lifestyle there is no short-term solution apart from hydrocarbons. Shale oil will form an important part of this production. However, the nature of shale production is such that it will tend to peak and then decline more rapidly than in most conventional reservoirs. Therefore, in order to maintain shale oil production, an aggressive campaign of further exploration and development is required. Without this and without success in other areas of hydrocarbon exploration, economic growth will slow and the world will be a very different place.