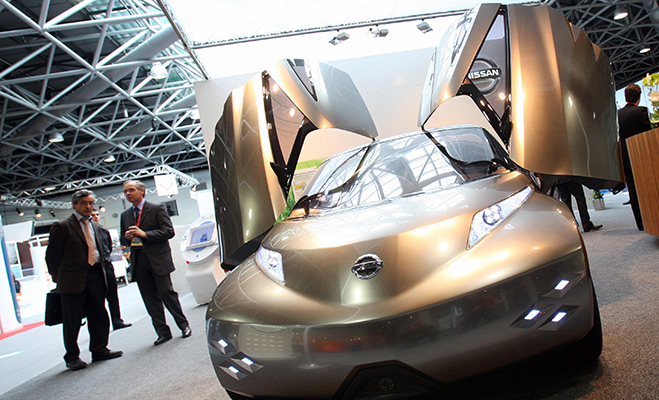 Many technologies have been put forward as a solution to the problem of providing energy for the auto industry. Battery-powered electric cars have seen an upsurge in interest in recent years. Governments have been eager to encourage cleaner vehicles in their cities by installing charging points. In the US, President Obama announced funding of up to $2.4bn to kick-start the nascent industry, while many European countries have started to invest in expanding the infrastructure to cater to such vehicles.

Hybrid cars, a combination of an internal combustion engine and an electric motor, have proved particularly popular with environmentally conscious drivers due to the lack of additional infrastructure required for them to run. Spearheaded by Toyota’s launch of its Prius car, many other manufacturers have unveiled their own models. The adoption of these vehicles is comparatively small at 2.2 percent of new car sales in 2011 in the US, although Japan saw a higher rate of 17.1 percent during the same period.

One technology yet to conquer automotive sales is hydrogen-powered cars. The concept behind the technology is that, through a combination of oxygen and hydrogen – which are abundant in the Earth’s atmosphere – vehicles will be powered more efficiently and without any carbon emissions.

Exploiting the technology has presented many difficulties: not least because hydrogen fuel is merely an energy carrier and not a source, with the energy being produced in so-called fuel cells. Fuel cells require a constant supply of oxygen and fuel to run, which is difficult to achieve. The most common way of making it is through environmentally harmful fossil fuels. Due to the inconsistent productivity of fuel sources like wind and solar, hydrogen-powered vehicles have not been seriously promoted as a reliable solution to green transportation.

New research
Many of the limitations that have prevented hydrogen-powered vehicles from taking off are being overcome. Fuel Cell Electric Vehicles (FCEVs) use hydrogen and oxygen from the air to operate. They have already been used in heavy material handling vehicles like forklifts. Car manufacturers from across the world have been developing their own models in the hope that they will eventually become commercially viable.

The question of cost is key to the industry. With battery-powered electric cars leading the way so far due to their comparatively lower cost, FCEVs need to bring down the cost of production to be able to compete. Ford’s Vice President of Powertrain Engineering Joe Bakaj said: “The question is when will fuel-cell vehicles become affordable to customers? Within 10 years, I think they will be as affordable as full battery vehicles, and the fuel cell will have a big advantage in range.”

One such initiative was launched in the UK in 2012. UKH2Mobility will bring together car manufacturers, the UK government, utility companies and infrastructure firms in order to support the industry. UK Business Minister Mark Prisk said: “Hydrogen fuel cell electric vehicles are increasingly being recognised as one of the viable options as we move to a lower carbon motoring future. UKH2Mobility will bring together industry expertise to establish the UK as a serious global player in the manufacture and use of hydrogen fuel cell electric vehicles and the supporting infrastructure.”

Mercedes-Benz, which already has its F-Cell car available to lease, says hydrogen could be extracted from existing infrastructure sources like water treatment plants. The company’s Head of Advanced Product Planning, Sascha Simon, said: “We could power over 200,000 vehicles just using waste gases from the chemical industry.”

In the meantime
Until a fully realised, zero carbon hydrogen offering is realisable some intermediary initiatives are taking place. Air Products is a gas provider that services many different industrial markets around the world, one of which is London’s taxis. Diane Raine, Air’s European chief, said in September that showing the technology works with non-renewable sources can get the market started in the interim.

She said: “We’re using brown hydrogen [from non-renewable sources] to demonstrate the technology and to improve the infrastructure. When the market is there, then we’ll invest in green hydrogen but we can only do that if the pathway to green production is there.

“Air recently launched two new hydrogen-refuelling stations in London, and plans more in the future. We want to prove the technology at the lowest possible cost. The London refuelling station uses brown hydrogen, which provides a 50 percent CO2 reduction compared with existing taxis.

“But we’ve made a commitment up front with Transport for London to improve the existing production line and eventually go green. A pure electric vehicle makes sense for a limited range where you have the capability to recharge slowly because it’s the most efficient way of converting renewable electricity into transport fuel.”

In Germany there are currently 14 refuelling stations, with a government and private sector initiative recently announcing an addition of 36 by 2015.

Industry enthusiasm
Accounting firm KPMG revealed in its annual Global Automotive Executive Survey that industry leaders believe the long-term prospects of FCEVs are more positive than those of hybrid and electric powered vehicles. According to the survey, FCEVs are set to dominate the space in developing countries like India, Brazil and Russia, in preference to hybrid or battery-powered electric cars. There was also a general consensus that fuel cells would be preferable to consumers over battery-powered electric cars, with 25 percent more executives telling KPMG it would be the preferred technology by 2025.

Kevin See of consultancy firm Lux Research believes FCEVs have the potential to balance consumer requirements. He said: “Automakers believe in the capability of the fuel cell vehicle. There are no issues with range anxiety, making it a zero-emission option with the requisite performance to serve a broader consumer base.”