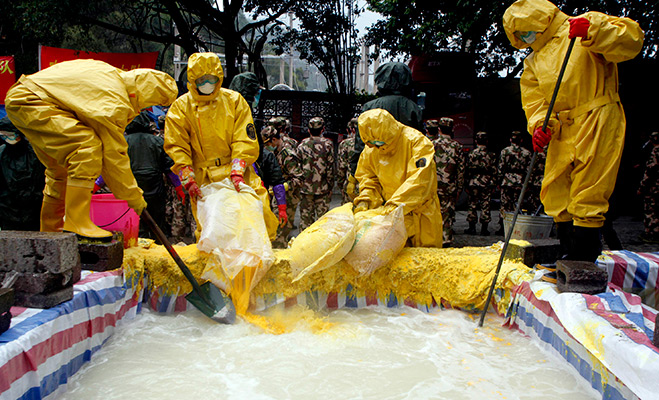 To stop the contamination from spreading, the local fire department had to add significant quantities of dissolved aluminium chloride, which binds to cadmium and settles on the river bottom. The toxic sediment will eventually be dredged.

Such threats to health and the environment are not uncommon in China. The water in as many as half the country’s rivers and lakes is unfit for human consumption or contact.

China has also gained a reputation for food and drug contamination (not to mention lead paint in toys and poisonous toothpaste). For example, in 2008, the industrial chemical melamine was added to milk products in order to give falsely high readings of milk protein, causing the death of six infants and sickening 300,000 other people.

Similarly, Mengniu, China’s largest dairy company, announced last December it had destroyed hazardous products at a plant in the Sichuan province after government safety inspectors discovered the carcinogen aflatoxin in a batch of its milk (the company denied any contaminated milk had reached consumers).

In 2007, melamine was deliberately added to an ingredient in pet food to artificially enhance its protein levels, causing renal failure in hundreds of cats and dogs in North America, Europe and Africa. Later that year, diethylene glycol was mislabeled as non-toxic glycerin, then mixed into cold medicine, killing at least 100 people in Panama, including many children.

The following year, crude precursors of the blood-thinning medication heparin were contaminated, causing hundreds of allergic reactions and 19 deaths in the US, and at least 80 serious adverse health events in Germany. In the same year, eggs contaminated with melamine caused kidney stones and renal failure in children.

In July 2011, following the highly publicised crash of a supposedly state-of-the-art high-speed train in eastern China, Qiu Qiming, a news anchor for the national broadcaster CCTV, turned the disaster into a metaphor. She said: “While satisfying our need for speed, we might be forsaking many things. China, please slow down. If you’re too fast, you may leave the souls of your people behind.”

Given the pervasiveness of Chinese-made goods, China’s safety record concerns consumers worldwide. But Chinese officials’ piecemeal efforts to restore confidence in the country’s exports – for example, establishing limits for trace amounts of melamine in dairy products and tightening quality control regulations for the dairy industry – are unlikely to reassure foreign consumers or importers.

Indeed, Chinese policymakers seem unable to grasp the importance of crafting appropriate incentives and disincentives. Rather than adopting the western model of motivating every link in the supply chain to adhere to specified quality and safety standards, the government continues to rely on top-down policies. But the decentralised, dispersed nature of many industries, the absence of an effective regulatory infrastructure and the lack of firm-level inducements undermine the effectiveness of this approach.

In fact, perverse incentives throughout the supply chain facilitate the widespread, systematic contamination of food and drugs. Both milk producers and heparin-precursor suppliers were motivated to add adulterants that would make their products appear to be of a higher quality than they actually were.

The task ahead
To be sure, Chinese authorities face a daunting task. Only a few decades ago, China was a poor, largely rural country with an agrarian economy and almost no middle class. Today, it boasts the world’s second-largest economy, a thriving manufacturing sector and a rapidly growing, prosperous middle class, while more than half of China’s 1.5bn citizens now live in cities.

Until relatively recently, environmental protection and consumer safety were secondary issues in the US and Europe. In 1952, London experienced five days of lethal, particulate-laden smog that killed 12,000 people and sickened more than 100,000. And, in 1969, America’s heavily-polluted Cuyahoga River caught fire.

Just as Europe and the US have made substantial progress in implementing effective health and environmental policies, China’s quality control mechanisms can be improved. But, in tackling the issue, Chinese officials would do well to heed the proverb: “With time and patience, the mulberry leaf becomes a silk gown.”