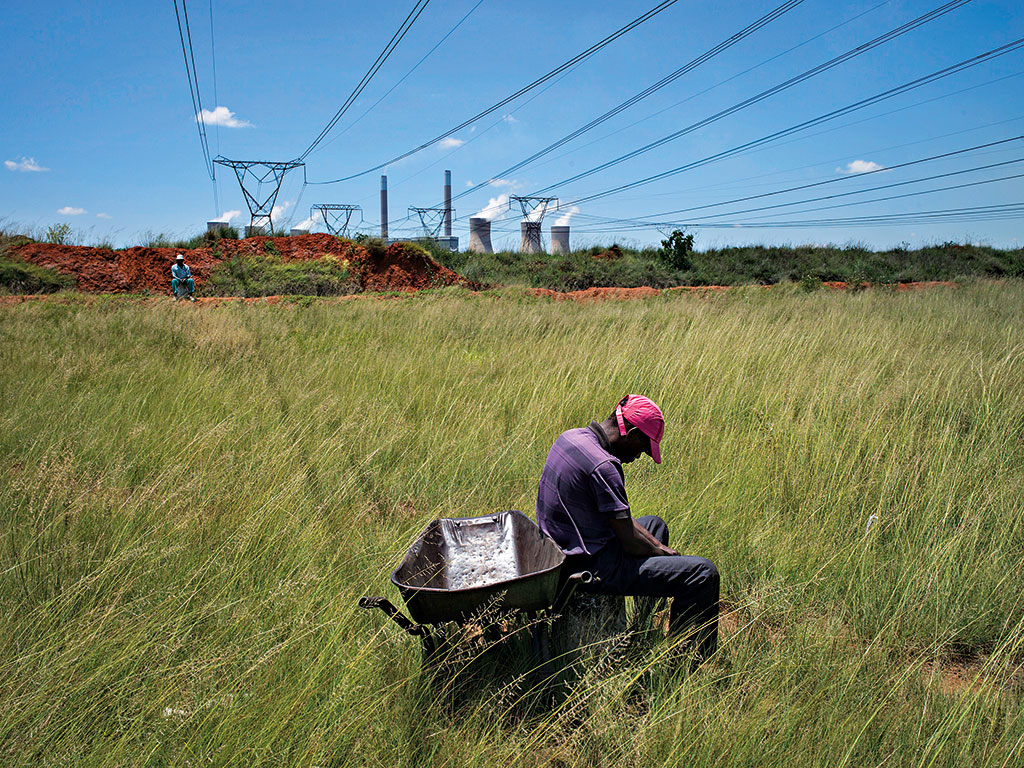 A worker near a power station in South Africa. The country’s recent power shortages have led Vodafone to adopt fuel cell generation

A growing number of large companies are turning to fuel cells as a source of affordable energy, won over by the idea of a steady supply of clean power that lacks the drawbacks of other forms of green energy. Fuel cells are less expensive than solar and wind, and take up far less space as well. These mini power stations can be placed discreetly on site and work by efficiently converting the energy released from a chemical reaction into electricity. Costs are less than those of grid-generated electricity, while releasing around half the emissions.

Adding to the growing status of fuel cells in the corporate world are the generous government tax credits and subsidies offered to encourage their proliferation, together with preferable financing terms. In the US, projects can receive a 30 percent federal tax credit, as well as grants. As it is not possible to get a short return on investment, many businesses are leasing the technology or engaging in power purchase agreements instead.

Powerful potential
Fuel cells can generate electricity around the clock, unbound by weather conditions (unlike solar and wind power) or shortages in the grid. “With the growing demand for constant, uninterrupted power, plus the risk of power outages due to more frequent and stronger storms, many companies are finding that fuel cells can provide resilient and reliable power while helping meet sustainability goals”, said Jennifer Gangi, Director of Communications and Outreach, Fuel Cell and Hydrogen Energy Association.

The use of fuel cells as back-up generators also has a lot of potential in the public sector: hospitals and schools, for example, could stand to benefit immensely from such a dependable and economical power alternative. What’s more, through fuel cells, a decentralised power supply could be realised, offering cities far greater resilience – a crucial aspect in making populated areas truly sustainable.

“Fuel cells are rugged, durable and quiet, so they can be sited inside or outside in tandem with conventional and renewable technologies and fuels”, said Gangi. “They can also connect with the electric grid, or operate on their own, giving fuel cell customers peace of mind to trust that valuable data and networks will keep running no matter what.”

Furthermore, as there are fewer mechanisms and moving parts within a unit than there are in, for example, a battery, less maintenance is required in the long term.

In emerging economies, fuel cells could be revolutionary, particularly for countries in which the supply of electricity is unpredictable or even unavailable in remote areas. Growing awareness about the technology has resulted in various multinational companies introducing fuel cells in order to extend their reach and tap into challenging markets more effectively. One such group is Vodafone, which has recently introduced fuel cell generators to its operations in South Africa in order to relieve recent issues with power shortages. Given the potential for businesses with global ambitions, the use of fuel cell energy is on course to grow significantly in the near future.

Getting greener
Some argue fuel-cell-generated electricity is not as green as other alternative power sources, as it uses hydrogen-rich fuel, but the technology has a number of ecological benefits that may not be immediately obvious. Gills Onions, the biggest onion processor in the US, recently installed two DFC300 fuel cell mini plants to provide all the base load power needed for its processing operations. In order to make the energy ‘cleaner’, the generators use biogas that is made from onion waste produced on site. This means the company’s power is carbon-neutral; it is the world’s first food processing plant to use clean energy generated entirely from its own waste.

Aside from earning the company this respectable title, the savings are also significant. FuelCell Energy (FCE), a company that designs, manufactures, installs, operates and services stationary fuel cell power plants, states on its website that the process saves Gills Onions approximately $700,000 each year in terms of power costs, and a further $400,000 per annum as waste disposal is no longer needed. “The plants can utilise a variety of fuels, including renewable biogas from wastewater treatment and food processing, as well as clean natural gas, directed biogas and propane”, said Kurt Goddard, Vice President of Investor Relations at FCE.

Heat can be captured for heating, or even cooling

As energy is released from fuel cells electro-catalytically, rather than through combustion, the apparatus is extremely energy efficient. Moreover, the chemical reaction releases heat energy as a by-product, which can be used for other purposes, such as heating. “Heat can be captured for heating (called combined heat and power, or CHP), or even cooling, resulting in system efficiencies of 90 percent or greater. CHP allows users to reduce or eliminate the need for boilers or water heaters and their associated costs and emissions”, said Gangi.

Connecticut-based Pepperidge Farm uses the heat energy produced by its fuel cell power plant to support around 70 percent of the operations of its on-site bakery. Not only has the system lessened the company’s vulnerability to electrical outages, it has significantly reduced its carbon footprint by producing both electricity and heat from the same unit. “Thus far, our plants have generated more than three billion kilowatt hours of ultra-clean electricity, equivalent to powering more than 342,500 average-size US homes for one year”, said Goddard.

Resilience and sustainability
Although not a new technology, fuel cells are gaining momentum in terms of sales and international attention. “Part of what makes fuel cell technology so exciting is the way businesses and others have adapted them to new needs and purposes”, said Gangi. “Fuel cells can power small electronics or large buses and trains. Several utilities have installed large-scale fuel cell power parks to provide power directly to the electric grid.”

That being said, a lot still needs to be done within the sector. “The primary challenge is educating the public, lawmakers, stakeholders and potential end users about fuel cell and hydrogen energy technologies, and how they both are critical to achieve a zero-emission, low carbon future”, said Gangi.

Furthermore, the cost of a unit is considerable, meaning most SMEs are denied the technology at present. For this reason, it is particularly important for governments to continue supporting the adoption of fuel cell energy – even more so than they do already. If banks, investors and manufacturers themselves are in the position to lease the equipment, it will not only add a page to their corporate social responsibility portfolio, but also secure a reliable stream of revenue.

Perhaps the most exciting aspect of fuel cell energy is the fact it enables businesses and states to decentralise their power supply, limiting potential shortfalls drastically. “States in storm-prone areas are investing heavily in resiliency and micro-grid projects to ensure ongoing power despite weather-caused grid outages”, said Gangi. “Several projects currently underway involve fuel cells as part of a micro-grid in order to ensure constant power through inclement weather.”

Given businesses are increasingly reliant on computer systems for communication and operational purposes, ensuring consistent electricity supply through any eventuality is simply invaluable in a hi-tech world that hopes to become more sustainable.