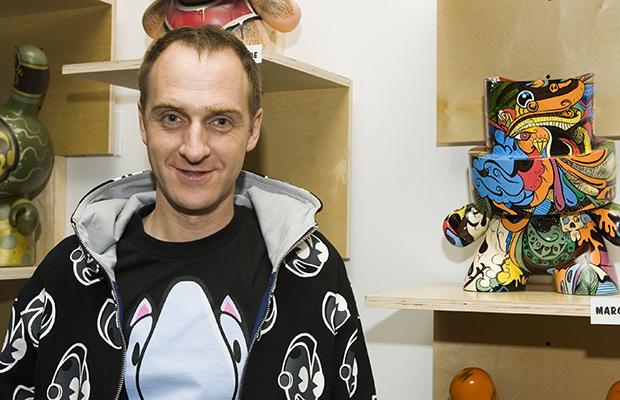 Paul Budnitz, owner of Ello. With its advert-free landscape and invite-only sign-up process, the site has impressed users who are tired with Facebook's marketing ploys. But the idea Ello could overtake the latter in the social media stakes is 'absurd', says Lizzie Meager

If you’ve used the internet recently, chances are you’ve come across Ello, the new social media platform threatening to knock Facebook off its perch. Currently invite-only, in the week beginning September 29 the site received in excess of 27,000 requests to join per hour, owner Paul Budnitz told Betabeat.

Ello’s main selling point is that it doesn’t use ads, and that it won’t sell its users personal data on to third parties. “We believe in beauty, simplicity and transparency… We believe a social network can be a tool for empowerment. Not a tool to deceive, coerce and manipulate – but a place to connect, create and celebrate life. You are not a product”, reads an excerpt from its profoundly eloquent manifesto. That’s all well and good, but so far, a safe haven from advertisers and a minimalist, not particularly user-friendly design is all Ello has to offer. That’s not much of a USP just yet; plenty of sites don‘t use adverts. Even Facebook didn’t for years. In fact, Ello’s story up to this point echoes Facebook’s – a small, private network open only to a close circle of friends, until its following is big enough to take public. With this in mind, it’s possible that Budnitz et al might follow in Zuckerberg’s footsteps, waiting on the support of the masses before adjusting his business model to maximise profitability.

The idea that this relatively small, design-focused site could lead Facebook’s 1.2 bn users astray seems slightly absurd. At present, there are approximately 300 social networks out there. Most internet users are signed up to a select handful, but Facebook is indisputably the most popular. Despite the endless and ever-growing list of privacy accusations lodged against it, more than 750m of us continue to log on every day. As it turns out, the public is not too concerned about privacy violations and a barrage of adverts interrupting their daily lives – at least, not concerned enough to close their accounts and say goodbye forever. Facebook’s success is something Caterina Presi, Senior Teaching Fellow at Leeds University Business School, calls “the advantage of critical mass – or to put it simply, ‘all my friends are there’”.

Despite this, Ello has generated a lot of noise, and that is deserving of recognition. The main issue is how it will be in any way profitable without using advertisements or selling its users’ data. Plans for a freemium model have been mentioned – like that used by LinkedIn, where basic membership is free to all, but a few cosmetic features are available for a small fee. It could work, but most users are unlikely to pay for something they could get for free elsewhere. A social network is only as good as its user base, and the best way to bring individuals on board it is to offer it for free –the exact opposite of Ello’s proposal. Advertising is used on platforms simply because it is a tried and tested stream of revenue that does not necessarily come at the cost of the consumer.

Budnitz denies any financial motivation at this point, but as the site grows in popularity, costs will quickly add up. Facebook expects to spend $2bn – $2.5bn on capital expenditure this year alone. If sufficient network infrastructure funding is not available, the quality of the service will begin to deteriorate, and its members would return to what they know. Support currently comes in the form of venture capitalists, Vermont firm FreshTracks – who usually expect to see a fairly swift return on their investment.

If Budnitz and his team did successfully derail Facebook, then the next concern is what this would mean for the brands currently capitalising on social media advertising. In terms of results, it’s more lucrative than its backlash might suggest – a 2014 Edison Research’s Social Habit survey revealed that 76 percent of respondents considered Facebook to be the only social network they would use to connect with brands and products.

An ad-free network does not have to be a brand-free network, and could result in a forced shift to less conventional methods of connecting with target audiences beyond the banner ad. Plenty of brands have already signed up; including Netflix, Sonos and Budnitz’s own cycle company, but the difference is that Ello users are given the choice. If you don’t want to see updates from a brand, don’t follow them, and you won’t have to.

“It will help brands to think of their customers in co-creative and empowerment terms with greater urgency”, said Presi. “It starts with listening. I mean really listening. And then it is giving tools to your customers to express themselves and their love for your brand more meaningfully through social media. Give them something to stimulate their creativity, something that is difficult enough to feel challenged by, let them make it their own.”

Advertisers needn’t lose sleep over Ello. Like so many before it, its perceived exclusivity has stimulated the curiosity of the public, and that novelty will inevitably wear off. Instead, they should take it as an opportunity to immerse themselves in the conversation, rather than interrupt it.