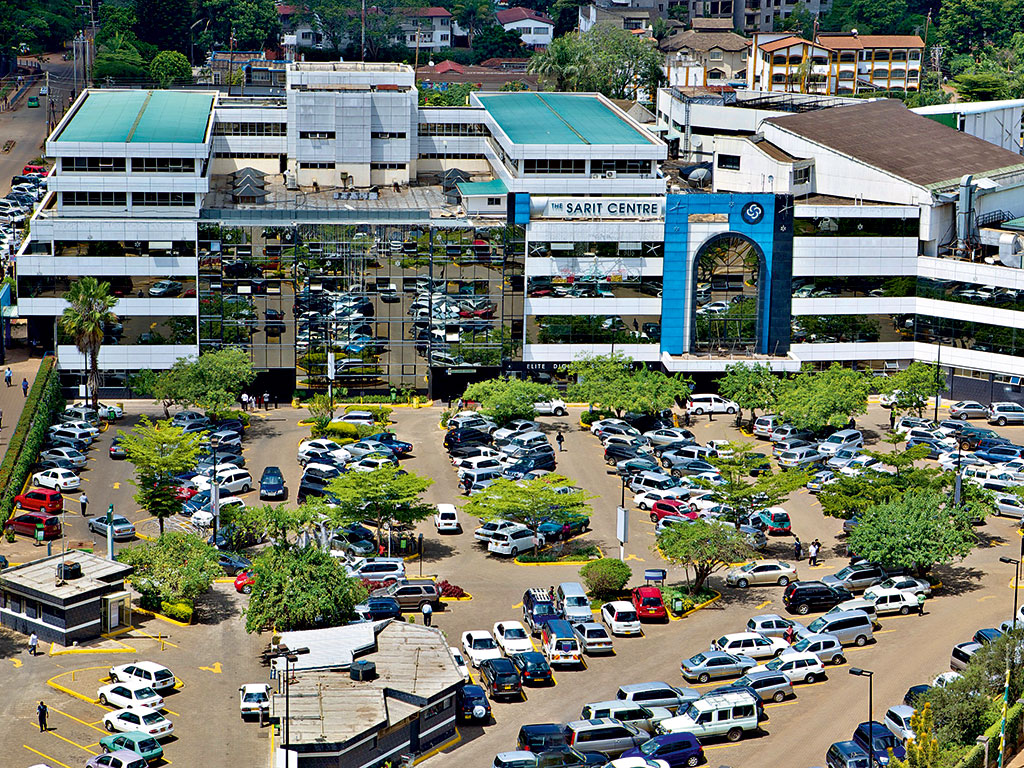 The Sarit Centre in Nairobi has been named Africa's Most Sustainable Shopping Mall by The New Economy. The retail innovator has survived a coup, become a master of anticipating trends and has committed to protecting the environment

Resilience is the quality that distinguishes the developers of the Sarit Centre and the concept they created: Kenya’s first – and still busiest – shopping mall, located in the nation’s capital, Nairobi. Resilience brought the centre through 30 years of turbulence in politics and the economy to make it the most sustainable shopping mall development on the Africa continent. Its slogan, “City within a City”, encompasses the one-stop shopping experience that changed retail forever in Eastern Africa.

Its slogan, “City within a City”, encompasses the one-stop shopping experience that changed retail forever in Eastern Africa

The frustrations and need for improvisation started while the centre was under construction. A coup attempt in 1982 nearly wrecked the developers’ plans altogether and blunted the economic growth the country had experienced since independence in 1963. The centre was an imaginative architectural concept, comprising one level of underground parking, four floors of retail, and four tower blocks of offices and apartments. But it was never to be achieved. One October morning two months after the coup attempt, the developers, SV Shah and Maneklal Rughani, met on site with their consultants and decided to immediately truncate the project and open with just 20 percent of what was originally conceived as the Brent Cross of Nairobi.

Post-crisis, bank interest rates soared beyond comprehension, and thousands of Indian businessmen and their families fled Kenya. Where up to this point there had been more than 200 applications on file for premises in the new mall, now no one wanted to know. Forced back purely onto family funding, Phase One of the Sarit Centre opened in April 1983 with just two tenants in place: the Uchumi national supermarket chain and the developers’ own Text Book Centre bookshop.

Public Affairs Coordinator Peter Moll recalls the excitement he and Centre Manager Nitin Shah shared when one morning they counted 20 cars in the otherwise deserted car park. It took two years to lease out the entire premises, but, on Christmas Eve 1985, the centre recorded what is still its record footfall of over 50,000 shoppers in a single day. From that point, the Centre management has never looked back. Careful monitoring of the tenant mix brought together retail and services in a combination never before seen in Nairobi. In the centre’s subsequent phase of development, a 1,500 sq m, international standard, exhibition facility was added to support what became a major component of its marketing strategy: consumer and trade shows.

The centre’s first holidays fair to promote domestic tourism took place in 1984 and subsequent fairs have been held annually with ever increasing success. Today, education, food and beverages, ICT, homes and gardens, property, international trade fairs and solo country promotions bring tens of thousands of visitors to the centre.

The centre has achieved many firsts. A loyalty card introduced in 1997 was the first in Kenya and is accepted by the centre’s 75 retails and service units. Paid parking became necessary and the centre’s pre-paid parking card greatly facilitates shopper access. The Sarit Centre was the first shopping mall in Kenya to brighten its Christmas season with external lighting, in-mall decorations and prize shopping promotions. Capitalising on its location in the up-market suburb of Westlands, it currently averages 25,000 shopper visits daily – a footfall more-recently opened malls have yet to achieve.

Virtually the same management team has directed day-to-day operations throughout the past three decades, although, in anticipation of starting on the next phase of its long-term plan, several more professionals have been recruited to the Sarit Centre team.

The Sarit Centre’s long-term plan incorporates the original ambitions of its developers to provide on its 12 acre site a true city-within-a-city complex of retail and services, apartments, offices and entertainment, to anticipate and sustain changing customer dynamics for decades ahead.

The centre includes a 220-room business-class hotel, and a 40,000sq ft clear-span exhibition hall with meeting rooms for international exhibitions and events. Two tower blocks of 700 apartments, 250,000sq ft of office space, and extended retail services and entertainment, totalling one million square feet are planned. The Sarit Centre’s new exhibition centre will combine first-class facilities with an extremely convenient location at the heart of what is now being termed Nairobi’s second central business district: Westlands, on the highway to up-country Kenya, Uganda, Southern Sudan and the DRC.

The objective is to provide an ambience to satisfy the demands of today’s generation of young middle-class professionals who look forward to living, working and playing in an exciting environment. Implementation of this development programme is planned so the interests of existing long-time tenants will not be neglected or negatively affected – a challenge in itself – while at the same time providing facilities for new global tenants offering the international brands customers now expect.

Over the decades, the Sarit Centre has sustained virtually 100 percent occupancy rates and many of its first tenants have achieved remarkable success in that time. Its Uchumi supermarket and Bata branches are corporate sales leaders in their sectors and tenants such as the LG stockists Hotpoint Appliances, Text Book Centre and many of the Deacons Group’s clothing stores also maintain high national rankings in their sectors.

Nor has environmental sustainability been neglected. The architects of the next phases of development have incorporated best-practice provisions for rainwater harvesting, recycling of used water, use of energy efficient lighting, and solar panels on the roofs. The $250m master plan is futuristic, yet based on sound financial statistics and projections, and is relevant when viewed within the sound political and economic status Kenya and the wider East African region has achieved over the past 50 years.