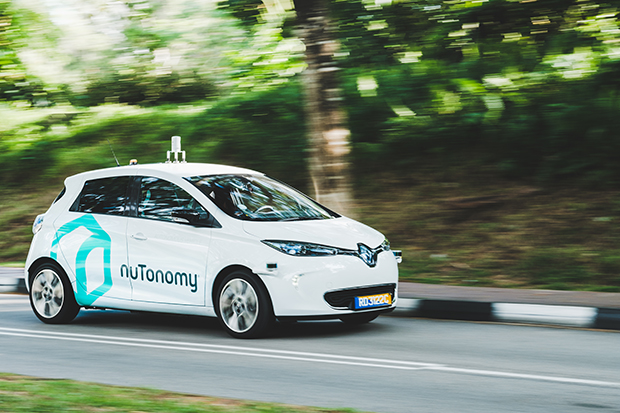 One of nuTonomy's self-driving cars on the road. The firm beat industry giants like Uber and Google to the punch in launching its fleet of autonomous taxis

US taxicab giant Uber hit headlines earlier this month when it announced its plans to deploy a fleet of driverless cars in Pittsburgh by the end of August. The Silicon Valley company was beaten to the punch however by the lesser-known nuTonomy.

Initially, nuTonomy will limit its trial to a small, controlled environment: for now, the driverless cars will operate within a 2.5km square business district in Singapore called one-north, with only a small number of vehicles on offer. During the initial trial period, passengers in nuTonomy’s self-driving taxis will not be charged for their first-of-a-kind ride.

The creators behind the world’s first automated vehicles hope that, by 2018, their driverless ‘robo’ taxi service will be fully functional throughout the country.

“Quite frankly I think Uber is the Goliath and we need to show that our technology is working and getting to a level of maturity that is viable for the market place”, said Doug Parker, Chief Operating Officer of nuTonomy. “We are in a technology race here and I think there are going to be a handful of winners.”

While this race has traditionally been dominated by US tech giants, such as Uber and Google, nuTonomy’s groundbreaking success in the field may shift the spotlight onto Asian innovation.

During the initial trial period, nuTonomy’s fleet of taxis will have a safety driver behind the wheel and a researcher in the back to watch the car’s computers and collect data.

“This really is a moment in history that’s going to change how cities are built, how we really look at our surroundings”, Parker predicted.

With Uber, Google, Baidu and Telsa all gearing up to launch their own driverless fleets across the globe, 2016 may prove to be a milestone year for motor innovation.