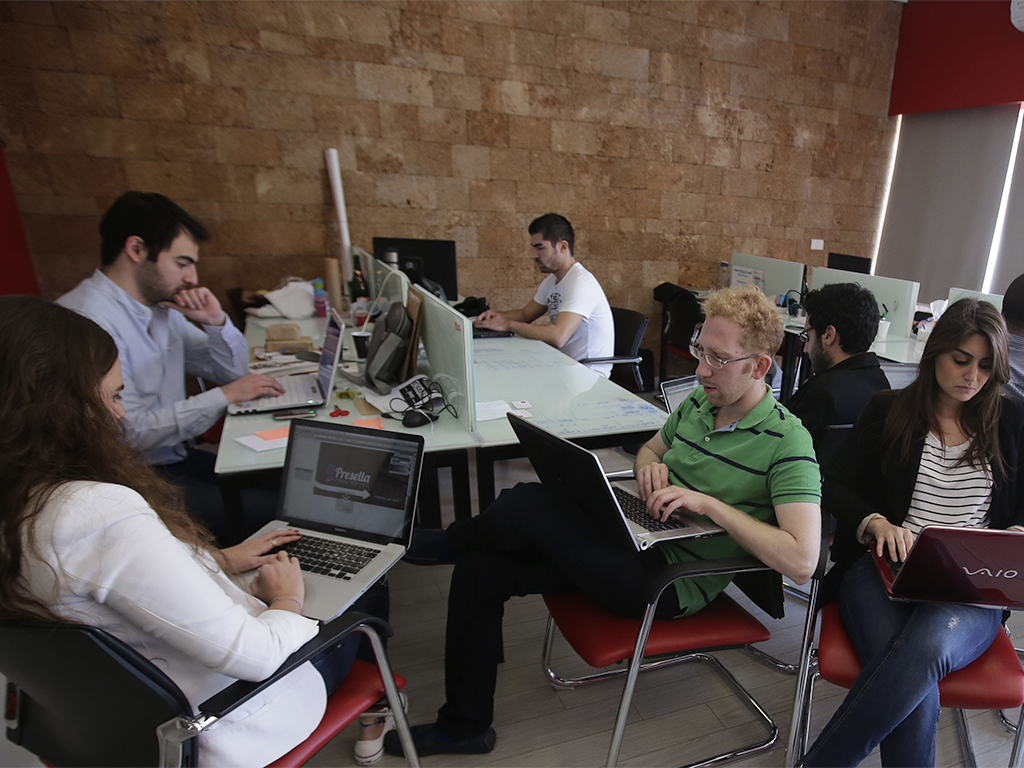 Lebanese entrepreneurs hard at work at Beirut's Seeqnce. The incubator is one of many around the world that has spurred technological innovation

Over the last decade, a great deal has been said about the supposed successes of technology incubators. These clusters of small technology startups have been widely praised for fostering the sort of collaborative and entrepreneurial spirit that transforms small ideas into runaway successes. It is a model governments have been eager to tap into, offering seemingly large incentives to intrepid entrepreneurs and small businesses willing to set up hubs that spur innovation.

[I]ncubators can also be referred to as ‘accelerators’: they help startups and entrepreneurs with everything from mentorship to office space and seed funding

Popularised in the US, particularly in Silicon Valley, incubators can also be referred to as ‘accelerators’: they help startups and entrepreneurs with everything from mentorship to office space and seed funding, as well as introducing them to investors.

However, while there have undoubtedly been success stories, there has also been criticism levelled at incubators for the way in which they churn out startups every year that have little chance of succeeding. Some feel incubators offer up spots within their buildings to all manner of startups, doing little to actually research whether their ideas have potential, and doing even less to guide those nascent companies towards profitability.

Hanadi Jabado, Director of Accelerate Cambridge, says: “When incubators started being set up, there was a need for them. There was a need because people didn’t have the infrastructure to be able to work from home. No one had high-speed broadband at home; ADSL didn’t exist. You needed to get out of your house and go somewhere where you could get connected should you enter the digital age. Nowadays, we don’t have the same need.”

Another issue is the need to put entrepreneurs together with other useful people, including mentors and potential investors. Whereas incubators were once ideal for this, now they might actually stifle creativity by being overloaded with failing companies. Jabado says: “You put in the same room 50, 100, 200 people, who do not know what they’re doing, who have no clue where they’re going, who have the need for support, for mentoring, for coaching, and for guidance. And they’re looking around, and everybody else seems to be drowning, and so they drown too.”

It is better to be proactive in pursuing the right connections, rather than relying on an incubator to help, says Jabado: “If you are in the startup world, there’s a flow going. You need to meet like-minded people. I am extremely lucky, because I work in Cambridge. I meet investors riding the bike. I meet entrepreneurs on the train. I am not sitting in a hub waiting for them to come and talk to me: they come and find me.”

Of course, incubators still serve a purpose and can often provide vital seed funding and guidance to entrepreneurs who would otherwise be completely lost. There are certainly many sprouting up around the world, which are helping to connect entrepreneurs with mentors, investors and other vital support.

While most incubators in the US have tended to form around California’s Silicon Valley, there are a number of projects that have been launched in other burgeoning technology hubs. One incubator that has helped foster innovation on the east coast of the US is DreamIt Ventures. Founded in 2007 by business partners Steven Welch, Michael Levinson and David Bookspan, the idea was to help innovative local tech entrepreneurs transform their concepts into commercially viable products.

Founded in Philadelphia, DreamIt Ventures has since expanded into New York City. During its seven years in operation, it has helped entrepreneurs realise their full potential with up to $25,000 in seed funding, as well as mentorship. In an interview with Forbes a few years ago, Levinson said: “We’ve brought in companies that have little more than an idea on a napkin. But in three months they can prove a market need and adjust their business model.”

He added the reason for locating the venture in Philadelphia originally was to boost jobs and harness the 18 universities within the city: “We want to establish the region as a tech hub outside of Silicon Valley.” It has had a number of success stories, including social location-based gaming platform SCVNGR, as well as online ticketing service SeatGeek.

In February, the incubator’s New York offshoot announced serial entrepreneur and angel investor Andrew Ackerman would be joining to spur innovation and help with mentoring. He told the VentureBeat website: “On a philosophical level, there’s one way that DreamIt is a little different. DreamIt does not push its companies to raise a round simply because demo day is coming.”

Seedcamp is one of Europe’s most successful and longest-running incubators. Launched in 2007 by a group of 30 investors, it is housed in the Google Campus building near Silicon Roundabout in East London. Each programme offered to entrepreneurs provides office space, seed money, mentorship and a year of support. It currently has a portfolio of more than 70 companies.

Backed by many of Europe’s leading venture capital and angel investors, the programme typically sees two or three startups receive a €50,000 investment in return for an eight to 10 percent equity stake. This comes after a vetting process in which around 20 startups are shortlisted and endure an intensive day of training, before having to pitch to a room full of venture capitalists and angel investors.

The investment cycle for Seedcamp typically takes place between September and October every year, in which events are held across Europe and it selects startups to work with. It also holds its annual Seedcamp Week event in London during September, where every company that has received investment that year goes through a series of mentoring days. Other initiatives include Seedhack – a weekend-long, industry-specific mentoring scheme – and Seedsummit, which is a platform to help startup entrepreneurs find the most active seed investors.

Described by technology website TechCrunch as Europe’s most influential accelerator, Seedcamp has seen a number of noteworthy exits. These include the $50m that mobile marketing firm Veita paid for analytics firm Mobclix in 2012, the $9.5m deal that saw RentMineOnline bought by RealPage, as well as Airbnb’s acquisition of Crashpadder.

Founded in 2010 by local entrepreneur Meng Weng Wong, Singapore’s imaginatively titled Joyful Frog Digital Incubator (JFDI) is one of Asia’s most important tech organisations. Part of the Global Accelerator Network – an offshoot of US incubator TechStars – JFDI has secured a considerable amount of funding for startups in Singapore.

JFDI offers SGD25,000 cash investments in return for equity stakes in businesses, and expects to take around 100 days to create functioning companies ready for proper investment. JFDI receives hundreds of applicants from around the world and takes on 10 companies at a time. Instead of limiting itself to ideas from Singapore, it has welcomed entrepreneurs from India, Vietnam, Taiwan France, Thailand, Canada and the Philippines.

In March, JFDI announced it had secured $2.1m worth of funding to help accelerate tech startups in South East Asia, with capital coming from a number of international investors. The idea is to scale up and help boost the number of successes, especially as there are a considerable number of tech graduates in the region.

“For the first time in history, innovation is becoming systematised and we now know how to teach entrepreneurship,” says Weng. “With huge support from the local community, JFDI was first to bring a new approach to nurturing startup companies to Asia. Now that we have proved that it works, it’s time to scale up and that’s exactly what this funding allows.”

Located in Hamra, in the heart of Beirut, Seeqnce was founded in 2010 by entrepreneur Samer Karam and is widely regarded as one of the Middle East’s leading incubators. Having officially launched Lebanon’s first startup accelerator programme in 2012, Seeqnce has helped a number of local entrepreneurs get their ideas off the ground and acquire much needed funding.

Seeqnce has been influenced by US accelerator programmes such as the Y Combinator and Techstars, but has also employed a number of unique strategies – due in part to the lack of expertise and the risk-averse culture of the region. Seeqnce has, for example, doubled the length of a typical US accelerator programme to six months. It typically invests $75,000 for a 30 percent equity stake, which also includes a 10 percent buyback option that depends on the startup’s performance.

In 2012, Karam spoke to TechCrunch about how he saw his organisation helping bring together what was then a burgeoning tech scene in Beirut. He launched the organisation with the help of friends and family, converting an old apartment into the incubator space. One of Seeqnce’s success stories has been online premium video service Cinemoz, founded in 2011, which has been described as the Arab world’s answer to Hulu. It offers over 1,000 Arab entertainment films, and its audience is thought to be well over 100,000 across the region.

While the Arab world has not got the best track record for tech startups, Karam believes Lebanon is unique: “The beauty with Lebanon in terms of the Arab region is that there is a great deal of free speech. So we are seeing huge amounts of ex-pats returning to this newly stable country.”

Africa’s tech scene has yet to produce many globally successful startups, but there certainly is a burgeoning community of technology-focused entrepreneurs across the continent who are looking for help and funding. Of the many incubators within Africa, Zambia’s BongoHive seems to be the most community-spirited. Launched initially as a series of technology workshops around the University of Zambia, BongoHive was conceived by Simunza Muyangana, Lukonga Linduda and Silumesii Maboshe as a way of spreading technological knowledge and ideas across the country.

After a surge in popularity, the group received a year’s worth of funding from Google and the Indigo Trust. Its first incubator location opened towards the end of 2012 in Lusaka, and it has since welcomed around 800 entrepreneurs. It is also part of the wider AfriLabs tech community that encompasses similar incubators across the continent. It has also developed its own user-generated map – Hubs in Africa – which allows other African incubators to list themselves, helping to generate a close-knit group of Africa’s leading tech minds.

Muyangaga believes hubs such as BongoHive can help transform typically poor communities that have high unemployment. He told Mashable last year that this was particularly an issue in Zambia: “Zambia has a large unemployment base, poor college and high school graduation rates, and an increasing youth population that cannot find jobs. I don’t think the government will sort that out soon. I lean towards the idea that encouraging people to start small businesses is going to sort out this problem quicker than if large corporations come in. If you’ve got a certain amount of passion for technology and look at problems in a way you that you weren’t taught in school, you should venture into your own enterprise, and the worst that you can say is you tried.”