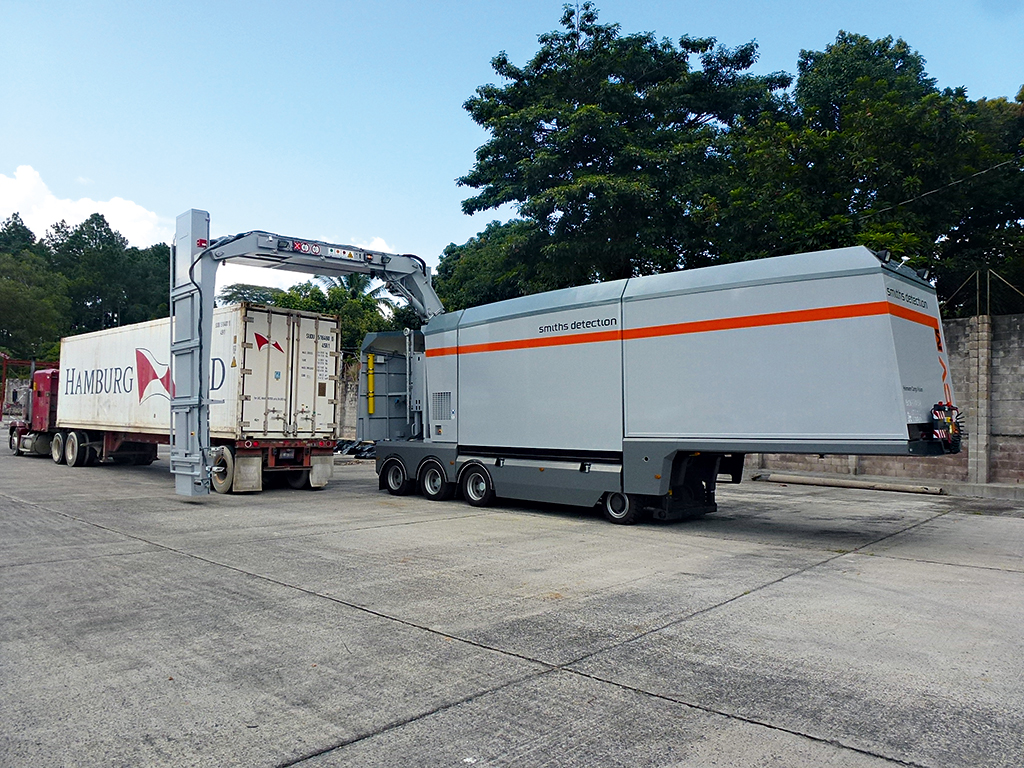 Smiths Detection has been pivotal in tightening El Salvador's border control. One of the company's HCVM T mobile scanners inspects a lorry for illicit goods (above)

The tiny Central American republic of El Salvador, still recovering from decades of bloody civil war, is not a destination for the faint-hearted. Its frighteningly high crime rate – officially labelled ‘critical’ by the US State Department – and strategic location for all manner of trade between North and South America mean security requirements are at a premium.

Throw endemic corruption and bureaucracy into the mix and it is little wonder El Salvador’s Dirección General de Aduanas (DGA, Customs Department) was keen to obtain the best possible solution to securing the country’s borders in the most cost-effective way. The DGA, responsible for controlling the export, import and transit of goods at all border crossing and entry points, turned to Smiths Detection for a solution that offered the added bonus of generating revenue by deterring tax evasion.

In conjunction with its partner Cotecna, Smiths Detection worked closely with the DGA on establishing El Salvador’s first turnkey multi-border inspection project. It is designed to safeguard the country against smuggling and the illegal trafficking of people, narcotics, weapons, radioactive materials and any other illicit goods, such as counterfeit medicines.

The most significant entry and exit points included the land crossings to Guatemala and Honduras, the international airport at Comalapa, and the Pacific port of Acajutla. All inspections at these points would be remotely controlled from the DGA headquarters in San Bartolo in the capital, San Salvador.

X-ray technology
Non-intrusive inspection equipment, based on advanced X-ray technology, is increasingly used the world over to ease costly bottlenecks at cargo screening checkpoints. It improves security, generates revenue and encourages free movement of trade 24/7 by slashing the numbers of time-consuming, manual inspections.

At the San Bartolo control centre, all the X-ray images and associated data from Smiths Detection’s sophisticated software go through a centralised DMS (Dataset Management System) for speedy analysis. An on-site operator checks and completes the cargo dataset information – customs declaration, ID container, licence plate and driving licence where applicable – and is informed as soon as the verdict is given.

Smiths Detection’s integrated approach in El Salvador features a wide range of its latest equipment, all deployed and configured to maximise both conventional threat security and detection capability for a range of contraband from narcotics to cigarettes.

The multimillion dollar contract included a world first: the selection of the new HCVL light vehicle scanner. Launched less than a year ago, HCVL screens fully loaded light vehicles such as cars, vans and, minibuses. It complements the HCVM T (mobile scanner) and HCVP (inspection portal), both powerful X-ray systems designed to inspect vehicles and containers. They are supported by the large, fixed, X-ray systems HI-SCAN 145180 and HI-SCAN 180180, designed to screen bigger freight and cargo.

Handheld SABRE 5000 trace detectors are also supplied to meet the need for closer inspections if initial screening has detected potentially suspicious materials in any consignment.

A safer El Salvador
The results have been immediate, with the El Salvador authorities already reporting a significant improvement in throughput of inspected traffic plus far more frequent discoveries and interceptions of illegal and undeclared goods. Time wasted on lengthy and often futile manual inspections has been slashed while valuable tax revenue has been increased through fines for convicted tax evasion and the undoubted deterrent impact, which makes such illegal trafficking not worth the risk.

Burdened by a legacy of violence and an invidious location on the crossroads of illegal trade in the Americas, El Salvador is nonetheless determined to secure its borders as best it can. Smiths Detection is proud to play an important part towards achieving that goal.