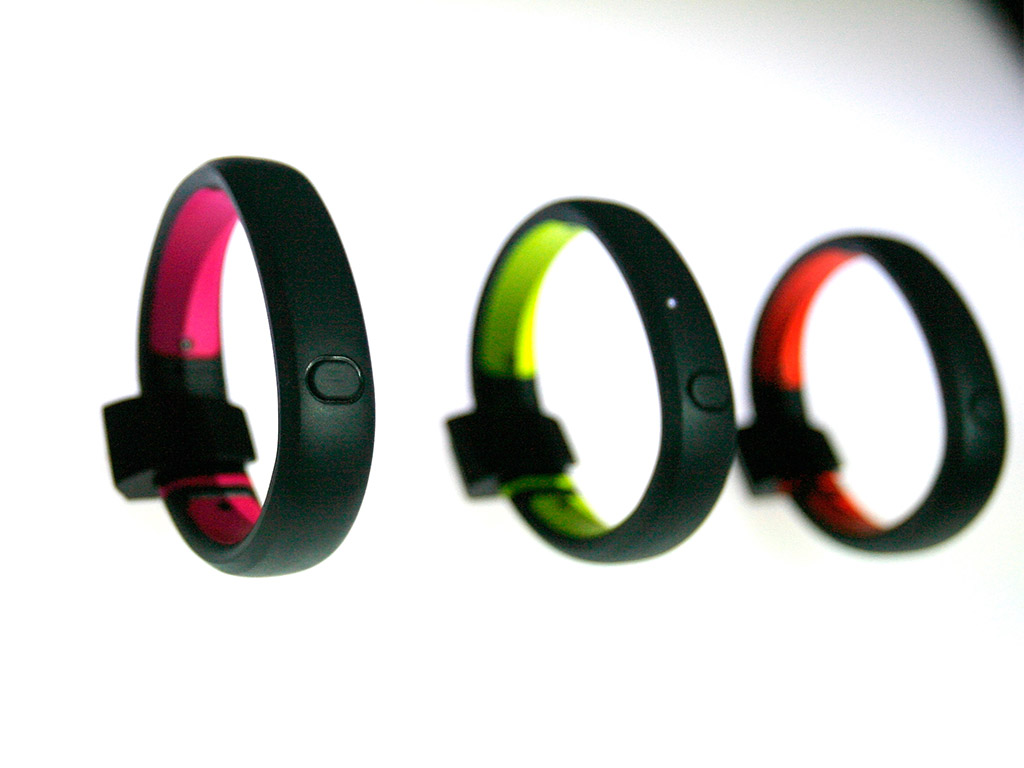 Nike showcase their FuelBand contraptions at a spring forum. Technology experts predict that devices like these could be used in the future to gain insights into a user's physical health

The rising demands for healthcare, as a result of ageing populations and soaring demand from newly enriched emerging economies, means that considerable strain is being placed on a system that is incredibly costly to maintain. From new life-saving medication to the latest revolutionary equipment, hospitals are struggling to pay for what is being demanded of them by the public.

According to a study last year by the Organisation for Economic Cooperation and Development (OECD), government spending on healthcare across its 34 member nations would soar to almost 12 percent of GDP within the next two decades, compared to the 5.5 percent over the last decade. Such a rise would not be sustainable at current economic growth levels, and so something must be done to make the health industry more efficient. This goes in hand with another recent study that showed that in the US, roughly $8.3bn is lost each year as a result of out-dated medical technology.

However, there are signs that a technological revolution is underway within healthcare, spurred on not by the traditional universities and pharmaceutical giant-innovators, but the leader manufacturers of consumer electronics. Innovative new products and ground-breaking research are set to transform the way people monitor their health and how doctors can respond to illnesses.

Both Apple and Google have been investing considerable amounts of money into researching products that will provide huge amounts of up-to-date, accurate data on people’s physical lifestyles. Google’s hiring of futurist Ray Kurzweil signifies that it is serious about investing in big technological themes that can have drastic impacts on how people lead their lives, with much of his work dedicated towards ‘smart medicine’. Apple, on the other hand, has been making a number of strategic hires from the medical profession, as well as experts in wearable computing.

Alongside this is the growing emergence of ‘big data’, which is already set to transform many industries, but it is in healthcare that it could have the most profound effect. Allowing medical researchers far greater insight into people’s bodies and the trends that effect them could allow far greater personalisation of medication, as well as a more efficient form of health provision.

Changing habits
The way in which people access health services is perhaps something that requires an immediate shift. Booking in to see your local doctor, or visiting a hospital for minor problems, can be both costly and time-consuming. In the future, it seems likely that these practices will be made far more efficient.

Intel’s Eric Dishman, a Global Director of the firm’s Health Innovation division, told consultants EY recently that there would be a large shift in the way healthcare is accessed by people. “Over the next decade, as much as 50 percent of healthcare will shift from the hospital and clinic to the home and community. New technologies will drive in-home care, at-workplace care and in-car care – thereby improving prevention, detection, behaviour change and caregiver support.”

He adds, “A lot of care can be done in quick snippets — ten seconds of interaction with your doctor — and doesn’t require a face-to-face visit. Cancer patients shouldn’t be sent to germ-filled hospitals for chemotherapy. It would be far safer and cheaper for them to have home infusion, but the current system is not set up that way.”

Wearable revolution
One sign that healthcare is being transformed is the interest shown by consumer electronics firms like Apple and Google, such as health and fitness tracking devices, which Dishman describes as the “consumerisation of medical devices.” “A wide range of personal health technologies are coming into their own – something we refer to as the consumerisation of medical devices and the medicalization of consumer devices. We will increasingly conduct virtual visits with doctors, nurses and care coaches through our cell phones, tablets and laptops.”

Nike is perhaps the company that has popularised wearable-tracking products the most with its FuelBand. While it’s a product that has been used mainly by fitness fanatics, the technology behind it has allowed for an important insight into the daily activities of users and has intrigued more specialist technology firms. Nike surprisingly announced recently that it would be ceasing production of the FuelBand, instead focusing its attention on providing software for companies like Apple.

While the move might hint that the technology had not taken off as others may have felt, many believe that Nike is stepping back from the market in advance of far bigger players – namely Apple and Google – entering it themselves. With a popular iOS app already available for Apple products, and the news that the tech giant was hiring a number of former FuelBand designers, it’s clear that there is still a future for the technology.

Apple’s rumoured iWatch product is expected to expand on the tracking sensors employed in the FuelBand, offering a whole range of information about a user’s body. While many had initially thought that Apple would release a product that would merely be a wrist-attached iPod, their ambitions seem to be far higher. A series of hires from the biotechnology field further suggests that the company has big plans for the health industry.

The company is thought to be looking at employing sensors in its smart watch that can monitor blood-sugar levels, nutrition, hydration, blood pressure, as well as fitness-related tracking. These will all be stored on a Healthbook app that can be accessed on a smartphone or computer.

What this means, however, is that a doctor can be provided with a highly detailed analysis of a user’s lifestyle and key health levels, giving them a better chance of correctly diagnosing any ailments and prescribing a more efficient treatment.

Digging deep
Another recent scientific breakthrough that will allow minuscule wireless electronic devices to be placed inside the body could also drastically change how people track their health and power life-changing implants like heart pacemakers and nerve stimulators. The research, by Professor Ada Poon and published in the Proceedings of the National Academy of Sciences, revealed that it would be possible to charge tiny medical devices that were implanted deep inside the body. Dubbed ‘mid-field wireless transfer’, the technique could potentially lead to devices like sensors and nerve stimulators being implanted in parts of the body previously impossible to access.

Professor Poon, lead researcher on the technology, said in a statement that the breakthrough was significant as there is a need to ensure implants can be placed deep within the body. “We need to make these devices as small as possible to more easily implant them deep in the body and create new ways to treat illness and alleviate pain.”

Currently, implanted devices have to be relatively close to the skin to be charged through near-field wireless power. Others, like heart pacemakers, need to be fitted with long-lasting batteries that eventually need replacing, therefore meaning further dangerous and invasive surgical procedures.

Tailored medicine
Personalised medicine is something that many believe is one of the next breakthroughs within healthcare, representing a shift from the mass produced, one-size-fits-all model long used in the pharmaceutical industry. The Human Genome Project, which began in 1990 and was completed in 2003, is currently being analysed and is expected to unveil a number of advances in medicine. It is also expected to reveal, from a person’s genes, whether they have a predisposition to certain illnesses, such as breast cancer, liver diseases, and a range of others. While the research had been hugely expensive before, the price is falling considerably.

Dishman says that the cost of research into human genomes has dropped so dramatically recently that it will herald a new wave of personalised treatments for patients. “The cost of sequencing a genome has fallen from nearly $100m per genome a decade ago to below $5,000 today. In a few years, I expect it to be essentially free. Some clinics will have access to genomic computing clusters building personalised models of their patients that doctors will use to design customized treatments. Clinicians will need decision-support tools to make sense of all this data and coordinate large patient populations.”

In a report published last year, management consultancy group McKinsey & Company said that big data was one of the key areas set to revolutionise the healthcare industry over the course of the coming decade. “An era of open information in healthcare is now underway…Pharmaceutical-industry experts, payers, and providers are now beginning to analyse big data to obtain insights. Although these efforts are still in their early stages, they could collectively help the industry address the problems related to variability in healthcare quality and escalating healthcare spend. For instance, researchers can mine the data to see what treatments are most effective for particular conditions, identify patterns related to drug side effects or hospital readmissions, and gain other important information that can help patients and reduce costs.”

However, the report goes on to say that there are a number of challenges that the healthcare industry must overcome if it is to harness big data to its fullest potential. “For big data initiatives to succeed, the healthcare system must undergo some fundamental changes. For instance, the old levers for capturing value, such as unit-price discounts based on contracting and negotiating leverage, do not take full advantage of the insights that big date provides and thus need to be supplemented or replaced with other measures.”

Smarter health
As emerging economies across the world see their citizens become wealthier, they will in turn have greater demands on health services. The studies that show healthcare costs are rising make it vital that something is done to ensure that everyone is able to have access to the best medical services. Fortunately, the technological revolutions that are occurring within the industry could well prove to be the magic pill it needs.