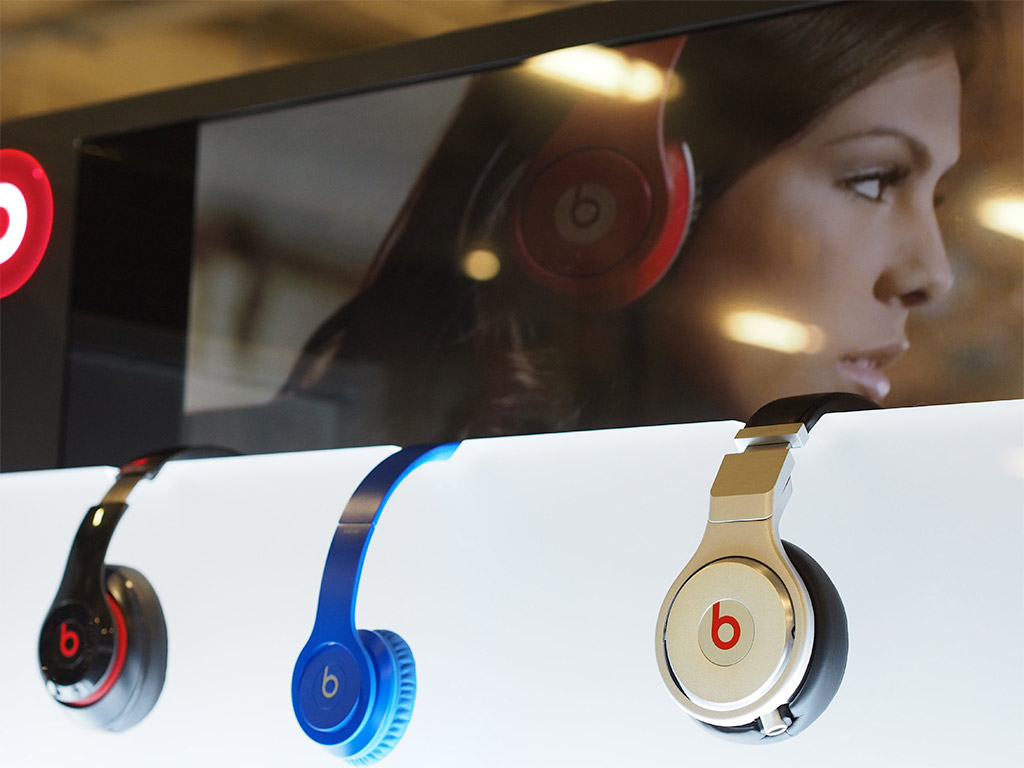 Beats Electronics' iconic headphones on display in Los Angeles. Apple has purchased the brand for £3bn, making it the company's largest acquistion to date

After weeks of speculation, Apple has finally confirmed the details of the Beats Electronics deal in what marks the California company’s largest acquisition to date. The acquisition overall comes to $3bn, and will see the company’s co-founders Jimmy Iovine and Dr Dre join Apple’s ranks.

“Music is such an important part of all of our lives and holds a special place within our hearts at Apple,” said Apple’s CEO Tim Cook in a statement. “That’s why we have kept investing in music and are bringing together these extraordinary teams so we can continue to create the most innovative music products and services in the world.”

Although Beats Electronics is only five-years-old, a short history of high profile celebrity endorsements and successful marketing campaigns have seen the company explode onto the headphone market, in which it is the leading player.

The company also boasts a formidable streaming service with some 110,000 subscribers, which, although far short of Spotify’s 10 million, could lend Apple a vital helping hand in securing a foothold in the streaming market. Past endeavours such as last year’s iTunes Radio have seen Apple struggle to get to grips with rival subscription services such as Spotify and Pandora. And the fact that Apple have resorted to acquiring an outside party shows the seriousness with which the tech giant intends to occupy a sizeable share of the market.

“I’ve always known in my heart that Beats belonged with Apple,” said Jimmy Iovine. “The idea when we started the company was inspired by Apple’s unmatched ability to marry culture and technology. Apple’s deep commitment to music fans, artists, songwriters and the music industry is something special.”

Some are unconvinced that Apple is interested in either Beats’ headphone or streaming business, and have speculated that the company’s interests lie elsewhere. “Expect Apple to tie Beats into a more comprehensive wearables strategy in the future,” wrote the digital analyst James McQuivey in a Forrester blog post. “It has the technology and manufacturing chops, Beats has a brand that can get people to wear conspicuous gear without shame. Put the two together and you have a recipe for body-based product innovation. As if Apple came to the wearables market, took one look at Google Glass and said, “We can do better than that.””

As pioneers in the music industry, both Jimmy Iovine and Dr Dre will prove to be crucial assets for Apple in bringing cutting edge music products and services to customers. Since the release of the iPod, Apple has led a number of path-breaking advances in the music industry, and the acquisition of Beats only serves to underline the company’s commitment to doing so again in the future.