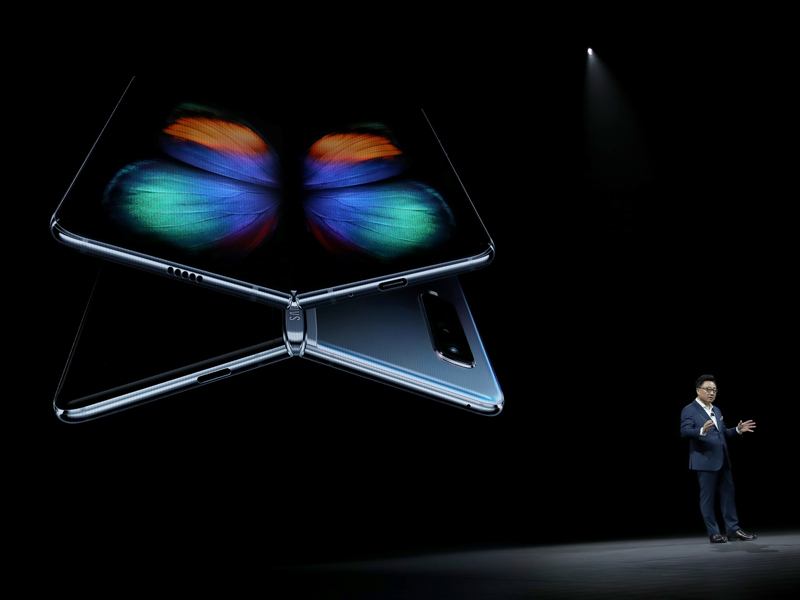 Samsung launched its newest model, the Galaxy Fold, at the Samsung Unpacked event on February 20

As smartphone sales decline due to a lack of global demand, on February 20, Samsung launched its most innovative product yet. At first glance, the Galaxy Ford appears to be a standard smartphone, with a 4.6-inch screen. However, the device folds outwards to reveal a 7.3-inch ‘Infinity Flex’ AMOLED, or active-matrix organic light-emitting diode, display, ideal for “watching videos, playing games or multitasking”, Samsung said.

Shares in the world’s largest smartphone seller fell by 1.4 percent as trading in Seoul opened on February 21

At the launch, the South Korean company stated that you could “watch a YouTube video of Hawaii, text your friend about it and browse travel options at the same time”. DJ Koh, Head of Samsung’s IT and Mobile Communications Division, said: “Today, Samsung is writing the next chapter in mobile innovation history by changing what’s possible in a smartphone.”

Investors, however, appear less than enthused. Shares in the world’s largest smartphone seller fell by 1.4 percent as trading in Seoul opened on February 21. With a price tag of $1,980, the product is unlikely to make an impact on the mainstream market, with many customers unable to fork out such a sum.

While sales of Samsung and Apple smartphones have cooled, Huawei saw purchases increase by 44 percent in spite of global security concerns and obstruction from the US market. Huawei’s smartphones are designed to comply with China’s strictly regulated markets, where more than 10,000 apps and websites are banned. This strategy saw Huawei overtake Apple in terms of worldwide sales late last year.

The broad range of Huawei’s products has allowed the company to develop lower-cost models, while Samsung and Apple’s prices continue to increase. Samsung listed its new S10 range at $900, a $100 increase from the previous model, while Apple’s iPhone X retails at $1,000.

Samsung is known for taking risks – even if they fail to pay off – often unveiling new products before its competitors. However, despite revealing a string of new technologies, including 5G development and improved components, the South Korean firm has been hardest hit as industry trends shift.

By increasing its prices further, Samsung has opened up a gap in the market, which Huawei is swiftly moving to fill. It would seem that, even with its latest innovation, Samsung is set to be outshone by rivals once again.