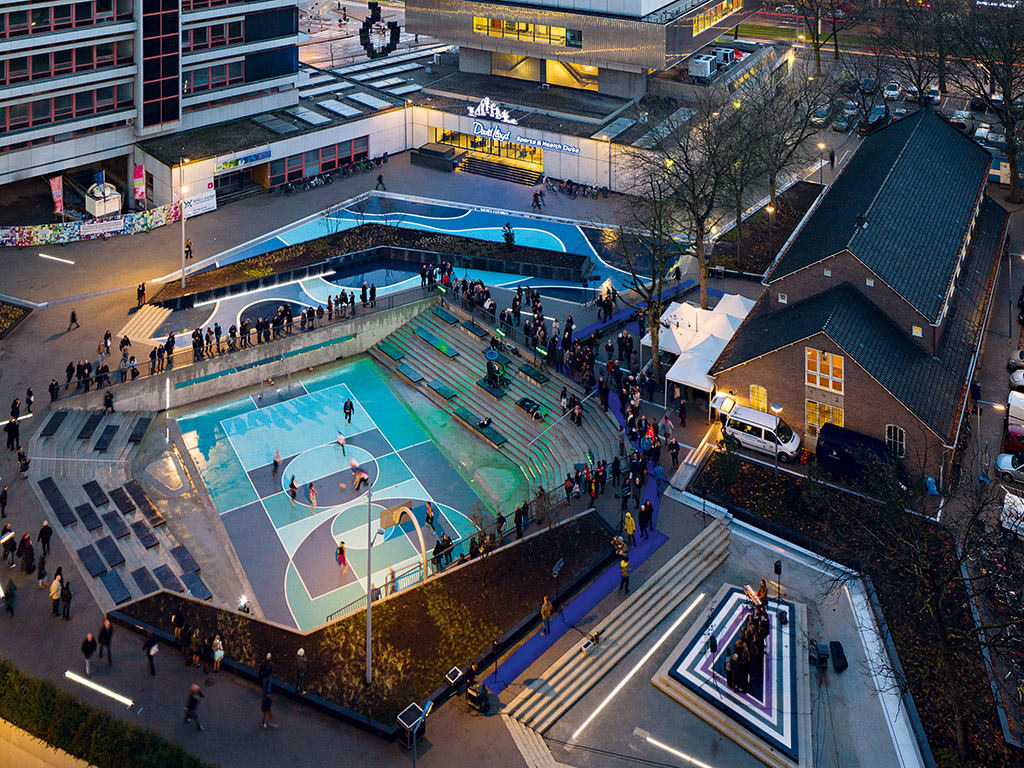 Rotterdam is becoming a safer and more attractive city, hard at work on a new infrastructure to protect itself against the changing climate. Its innovative and progressive approach to water management is having a visible effect – one that has not gone unnoticed. Scientists, policymakers and journalists worldwide are monitoring these developments closely. Rotterdam has managed to surprise everyone time and again with initiatives such as ‘water plazas’, clever water storage solutions and floating constructions.

Rotterdam is a low-lying delta city with water encroaching upon it from four different sources: changing groundwater levels, incoming water from rivers, increasing rainfall and rising sea levels. “Nowadays, the majority of the world’s population lives in cities, and that number is still on the rise,” says Pex Langenberg, who, as the Vice Mayor for Port, Sustainability and Mobility, is responsible for water management in Rotterdam. “Because cities are dealing with climate change and are places where a lot of people are living together in a small area, you have to be innovative with the available space.”

Every year, at least 25 international delegations visit Rotterdam to learn from its expertise in water management. “Rotterdam is a unique ‘testing ground city’, where there is the opportunity for businesses, scientists and educational institutions to collaborate and come up with innovative water management solutions that enable us to play a leading role in addressing the urban problems of this century,” says Langenberg. “Our unique approach means we are ready for the future.”

Can-do mentality
According to Langenberg, this is all part of Rotterdam’s can-do mentality: “It’s a city which is not afraid to enter into new adventures by making space for innovation and technology.”

This also has an economic component: “What we’re developing is also being exported. For instance, the engineering company Arcadis is currently carrying out similar projects all over the world.”

Piet Dircke, Global Director of Water Management at Arcadis, confirms this: “It’s in the cities that the money’s being earned, so cities need to have the right infrastructure and protect themselves against climate change.” He says Rotterdam is a textbook example of how to deal with changes to the climate.

“As a company, we’ve been reaping the rewards.” Arcadis has landed several contracts as a result, including ones in New Orleans and New York City. Dutch teams are also active in Ho Chi Minh City and Jakarta. “The pilot projects in Rotterdam, and the new expertise gained, have created an excellent export product for trade and industry.”

In addition, Rotterdam heads up Connecting Delta Cities, an international network of delta-based cities dealing with similar challenges. “Doing nothing is not an option: if we fail to take action now, things will go badly wrong in the future,” says Arnoud Molenaar, Project Manager at the Rotterdam Climate Proof programme. “To maintain Rotterdam’s position as one of the safest ports in the world, it’s essential to develop a clear vision for our management of water now.”

Creative solutions
Climate changes are bringing about an increase in the intensity of rainfall. Therefore, more water storage facilities are needed.

According to Molenaar, this is one of the biggest challenges Rotterdam faces: “We’ve developed many smart solutions, such as the construction of a rowing course on the outskirts of the city which at the same time functions as a water storage facility. In designing new neighbourhoods, we have also left more room for water.”

In the city centre, however, there is less space for surface water, demanding creative solutions, including the design of water storage facilities underneath and above car parks. Molenaar says: “Our pride and joy is the water plaza at Benthemplein. A grey and boring square has been transformed into an attractive outdoor space, which can be flooded periodically to accommodate heavy rainfall.”

As well as making the city more attractive, water plazas also increase safety and security. The project is a good example of public-private partnership, with local municipal authorities cooperating with central government, the Water Board and local businesses. In its ambitious approach, the municipality of Rotterdam is also mindful of the wellbeing of its citizens. The Roof Park (Dakpark) is a good example – this is a dyke in which shops are situated, while the green roof forms a public park. What used to be no more than a flood defence has become a premium leisure space for a large number of people.

“Creative water management improves the urban environment,” Langenberg concludes. What started as a necessary reaction to climate change has developed into an international showcase for smart water management involving all stakeholders. This allows Rotterdam to remain the most ecologically sustainable port city in the world.

Cooperation is crucial to a smart city

A smart city not only deals with data and IT in a smart way: other sustainable elements, such as the physical and social infrastructure, the environment and knowledge development, need to be in balance as well. Fred van Beuningen, Director of Rotterdam Partners says: “These are the foundation stones for a liveable city in which innovation and progress are key, and which is also an attractive place to live, work, study and stay.”

A smart city such as Rotterdam cannot exist without cooperation. As the promoter of the Rotterdam economy, Rotterdam Partners is ideally suited to bring all stakeholders together in creative coalitions. Van Beuningen says: “We’re looking for collaboration between local authorities and other entities in the city, for example entrepreneurs and housing corporations.”

According to Van Beuningen, these coalitions “are often project-based – you form a working party around a particular issue. They are also pragmatic – you have to work together with stakeholders who actually want to achieve something to help the city move forward. Don’t think in dogmas – think in solutions. Think in terms of cooperation rather than competition”. Rotterdam Partners can play a central role in this. “We understand the investment and societal agendas, which include various public-private cooperation goals,” says Van Beuningen.

“A city is a complex structure. Issues have to be fine-tuned collaboratively by looking at the system as a whole. A local government needs its partners for these solutions.”