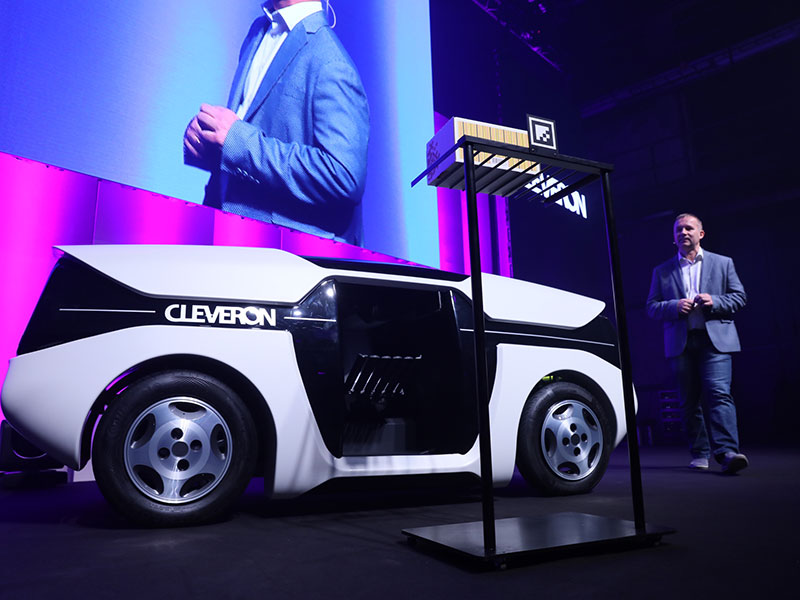 A self-driving parcel delivery car from Cleveron - whose founder, Indrek Oolup (pictured), has found Estonia a prosperous place in which to run his business

In June last year, Estonian President Kersti Kaljulaid left her 13,000 Twitter followers confused when she tweeted: “Estonia is 1.3 million people and we have four unicorns.” The tweet, as it later transpired, had not been referring to the mythical creature, but to Estonia’s technological success.

The term ‘unicorn’ was coined by venture capitalist Aileen Lee in 2013, and is used to describe start-ups with a market valuation of $1bn and over. As Kaljulaid alluded to, Estonia currently has four – a number that no other small country in the world has reached so far.

In fact, despite its size, Estonia has become one of the world’s most technologically advanced countries. This is largely due to the efforts the Estonian Government made in the 1990s to reform the country and turn it into a digital society, a movement now known as ‘e-Estonia’. As part of this movement, 99 percent of public services are online, 96 percent of taxes are declared online and 99.6 percent of banking transactions also take place online.

Policymakers have taken radical steps towards digitalising the country, ensuring that internet access is a basic human right and offering ‘e-residency’ to anyone who would like to set up a business in the country from a virtual base. Estonia also has the second-fastest public Wi-Fi in the world, and digital processes are a key part of everyday life, with virtual signatures preferred to physical ones for many transactions.

In 2019, Estonia will release the first official visa for ‘digital nomads’, allowing foreign nationals to work in the country for 365 days. The visa is designed to attract top talent from around Europe.

Estonia has been an innovator in almost every aspect of public life. It was the first country to:

Additionally, it is the first country in the EU to legalise the road-testing of vehicles classified as level SA3 2 or SAE 3, and it expects to implement the Kratt law later this year, to legalise Artificial Intelligence.

All this shows that Estonia, with its innovative government and people, is a perfect test ground for new and bold ideas. Skype, TransferWise and Taxify are just some of the leading companies to hail from the country, and many more are expected to emerge in the near future.

One of the major ways Estonia has encouraged technological development is by embedding blockchain into many of its processes – in fact, Estonia was the first country to use the technology at a government level. Blockchain has since gained huge commercial appeal, with its ability to provide heightened security and speed up many otherwise-lengthy processes proving beneficial to a host of different sectors. The world’s largest blockchain company, Guardtime, was created in Estonia, and offers its services to the US and Thai Governments, as well as American telecommunications conglomerate Verizon.

As a result of its commitment to innovation, Estonia was named as the number one entrepreneurial hotspot in the World Economic Forum’s Europe’s Hidden Entrepreneurs: Entrepreneurial Employee Activity and Competitiveness in Europe report, 2017. The study suggested that the country’s entrepreneurially orientated policy had greatly promoted its economic development. It also noted that almost 80 percent of Estonians work for SMEs, a significant increase on the European average (67 percent).

Estonian Investment Agency, a part of Enterprise Estonia, is a government agency that promotes foreign investments in the country, as well as supporting companies investing and expanding there. It offers free of charge investment consultancy services, which are always tailored to meet potential and existing investors’ needs. These include: