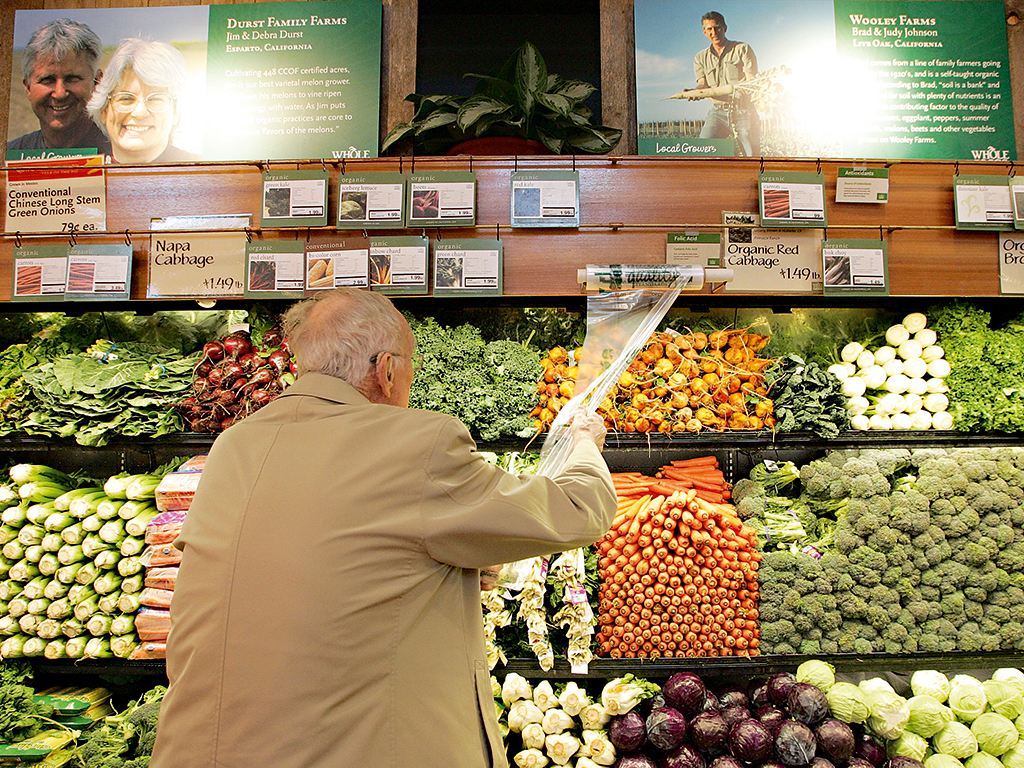 A customer picks out vegetables at one of the many stores capitalising on the ‘natural foods’ trend. Organisations such as Axiom Foods are rapidly responding to changing food markets

It is human nature to hold tightly onto the past. There is comfort in what has already been experienced. As such, it’s a natural reaction to vehemently protect technologies, economies, the state of nature, and communities that have been our old friends and game-changers in the world; watching them disappear or be dismantled isn’t easy to accept.

One would never have imagined, 40 years ago, that we’d have a machine in our pocket that, at the swipe of a finger, could make even the most obscure of information available immediately. What then would happen to the door-to-door encyclopaedia sales man? When free airline meals disappeared from our seat trays, we bemoaned our love/hate relationship with them and an entire industry melted overnight. Next we had push-button food service on Virgin Airlines, and it was fun. Somehow we figured it out, and thrived as a result.

Nevertheless, the world, and everything in it, changes every day. It can be disheartening to witness ice caps melting, economies weakening, leaders who fall short, but change can also be incredibly exciting and surprising. We have a choice to name change as ‘bad’ and make efforts to turn back time, or we can accept the past and focus on what we do today and tomorrow. The subject of food and the current, massive shift in how global crops serve us is of global significance. It may appear daunting, maybe even scary, but there is innovation that has changed the face of the earth, our food economy, and perhaps even our biology.

One significant change in the food world is that the two largest global crops, wheat and corn, are waning in production and use; the third largest, rice, is poised to become ‘the new wheat’. Recent clinical trials at the University of Tampa have shown protein fractioned from brown rice can provide equal benefit to that derived from animals in the sport nutrition arena. Wheat, which for centuries was the most common food crop grown on Earth, has steadily decreased from worldwide production of 61.3 million metric tons in 2012 to a predicted 55.1 million metric tons in 2015. Though wheat was once celebrated as the poster child of the health food movement, consumers are now rejecting this ‘king of grains’, with some identifying it as being at the very root of their health problems. The rise of gluten intolerance and celiac disease has skyrocketed.

Studies have been conducted at John Hopkins Medical Centre to find the safest ways to test children for allergies. Silicon Valley entrepreneur Sean Parker, known for creating Napster and being the first President of Facebook, donated $24m to Stanford Medicine to launch an allergy centre. His gift was the largest private donation to allergy research in the US and was inspired by first-hand experience of life-threatening allergies.

Consumer concern
Never in history have we witnessed our bodies rejecting food as we are today. The epidemic is creating changes and trends in how food products are created and marketed, how grocery is presenting options to shoppers, and even how restaurateurs differentiate themselves and serve up sustenance. The largest scale problems seem to be with wheat in regard to gluten intolerance, and consumer reaction against genetically modified corn. Soy has also fallen from favour, especially in the over-$6bn protein supplement industry. The FDA lists soy as one of the ‘Big Eight Allergens’, and some consumers have expressed concerns regarding its naturally occurring phytoestrogens. Rice is emerging as the new wheat, in that it can be a substitute for not only allergenic animal-based and soy proteins and milks, but also serve as a substitute for key ingredients from all major crops, such as wheat flour, bran fibre and oil, corn syrup, and starch.

“Some of America’s largest food production companies, such as Kellogg’s, General Mills and Pepsi, are developing new products specifically without wheat and corn, in favour of non-allergen grains, such as rice”, says David Janow, CEO of Axiom Foods, one of the leading fractioners of brown rice, making it into protein, syrup, milks and meat analogues.

The pace of Axiom’s development of allergen-friendly food products with rice is ferocious. Food and beverage giants are knocking on Janow’s door to source his innovative plant-based ingredients after he created proprietary all-natural processes to fraction the ancient grain. Since 2005, the Los Angeles-based company has supplied thousands of food manufacturers with the patent–pending Oryzatein, available in various protein concentrations – including the first 90 percent brown rice protein isolate. Janow’s efforts in this, and fractioning protein from plants such as pea, sachi inchi, hemp and most recently flax, have won Axiom Foods The New Economy Award for Best Food and Beverage Solutions, 2014; the awards recognise the highest achievers with big ideas changing the global economy for the better.

The world’s second crop, corn, is suffering a hit as well. According to Dr Alette Christine Coble-Temple of John F Kennedy University, “the proliferation of genetically modified corn is now being linked to celiac disease and gluten intolerance”. Dr Coble-Temple is a consultant for families and organisations on the impact of severe food allergies, and how they affect biopsychosocial development, attachment theory, and resiliency in children and adolescents. “Speaking of genetics”, says Dr Coble-Temple, “a study by Dr Grace Yu showed if a child has an allergy and they have an identical twin, that child has a 67 percent chance of having the same allergy, but the same child’s older or younger sibling’s propensity to share the intolerance drops down to a pale seven percent.”

The race is on to supply nutritious products with ‘clean labels’ featuring everything people want and nothing they don’t, plus ingredients they understand. Thankfully, the change is occurring from the inside out. Groceries and restaurateurs
In the grocery sector, specialty aisles have been a long-term trend, their themes evolving based on consumer demand. In the 1980s, fat-free was the direction, followed by low-carb. Billions of dollars of products were developed to satiate consumers’ hunger for these products. These trends ran deeply into the processed food space and across demo- and psychographics, far beyond the assumed alternative health food or fitness aficionado consumer. At one point, Walmart had one of the largest low-carb food programmes in the US, even appointing a team of food company entrepreneurs to show the way for the retailer, making recommendations on what foods consumers were demanding and giving direction on formulating them for the retailer.

The rise of gluten allergies and consumer concern about genetically modified corn has sparked a mainstream interest in natural foods and organics. In Spring 2014, Walmart partnered with natural food grocer Wild Oats to add an organic section, and is attempting to compete in the space by offering natural food and organic products at a 25 percent discount over speciality retailers such as Whole Foods. Spokespeople from Walmart say 91 percent of its customers are asking for organics. According to Mintel Research, the gluten-free industry in the US alone is pegged at $10.5bn.

The last of the ‘food frontier’ segments to respond to this shift in food quality offerings is the restaurant industry – but, even there, changes are well underway. Some of the biggest restaurateur experts – who proliferated global restaurant empires such as Pizza Hut and TGI Fridays, and have been involved with brands such as Baja Fresh and Wendy’s – are at the forefront of providing super-dense, high-nutrient food concepts. Just as Walmart is doing to mainstream organic grocery offerings, the creators of Sharky’s Woodfired Mexican Grill, Steve Paperno and David Goldstein, are applying the chain restaurant format to provide Americans with what they describe as “food to feel good about”. This 21-location chain in Southern California has been named the “fastest growing” chain by Restaurant Business Magazine and the Los Angeles Business Journal.

Paperno and Goldstein are one of a healthy handful of restaurant barons heading in a ‘good for you’ direction. Greg Dollarhyde, a driver behind Pizza Hut and Taco Bell, is hatching the Veggie Grill, a 26-location chain providing “craveable vegetarian food that enables you to move veggies to the centre of your plate”. The effect these types of restaurants are having on the global crop switch is mostly a drive away from anything GMO, such as corn, canola, cottonseed and soy, favouring organic over conventionally grown anything. Rice, challenges and opportunities
Like anything, rice has had its share of issues and challenges, most of which have been in relation to an education process about how it’s grown and as a water-saturated ‘translocator’ plant (i.e. what is takes from the soil). Organisations such as the World Rice Alliance are at the forefront of global movements to ensure pristine products from the cleanest growing regions of the world get onto our plates. Companies such as Janow’s Axiom Foods are global proponents of the allergy-free food movement and the food industry is hungry for what they have to offer. These changes are so massive that organisations such as the US Food and Drug Administration are putting into place new regulations and looking to experts such as Janow while forming their best practices.

With the rise in the number of people consuming more plant-based meals, rice has even more opportunities as a sustainable, environmentally friendly alternative to animal-based proteins and milks.

“When we fraction apart an organic brown rice kernel”, explains Janow, “there is so much to be reaped from it. We feel good about the fact that we’ve hit upon nutritional solutions for such a huge problem in the world. We never realised how much gluten and other food allergies were going to be a player in our business, or that the incredible science of genetics could affect the food supply as it has, but here we are.”