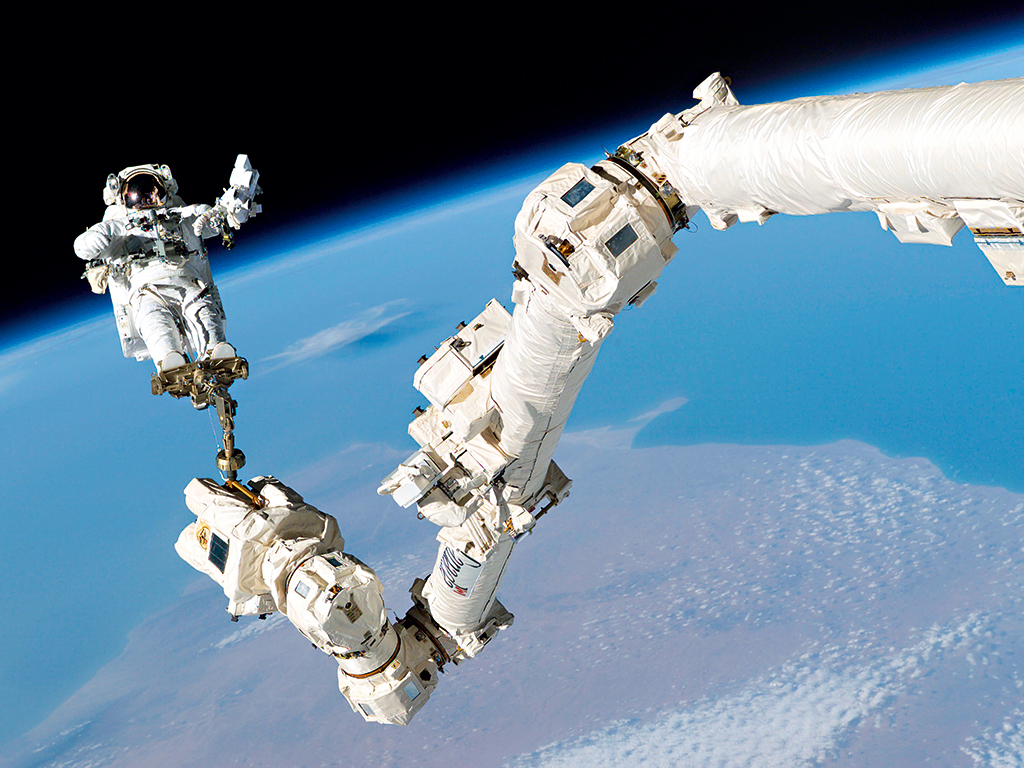 An astronaut during a spacewalk. Zero gravity has a number of long-term effects on the health of human skin

NASA plans to send humans to Mars within the next 20 years. The Red Planet is more than 55 million kilometres away and it would take at least half a year to get there. How safe is such a trip? How do you protect the astronaut’s health in the hostile environment of interplanetary space? The astronaut will face cancer-inducing radiation and maybe massive deep-space solar storms. In-spacecraft air pollution, such as skin particles from other crewmembers, may cause problems. And, of course, the body will change as a result of the long-term lack of gravity.

Human spaceflights have been performed since 1961; 541 astronauts and cosmonauts have been to space, corresponding to about 123 man-years. The record for the longest spaceflight is held by Russian cosmonaut and space medicine expert Valeri Polyakov, who spent 438 days non-stop in space.

Decrease in skin thickness among some astronauts

At the moment, most health information on humans in space is obtained from scientific projects performed during six-month stays at the International Space Station (ISS), in a low Earth orbit at an altitude of 430km. A series of pathophysiological modifications have been observed, but not everybody is a responder. The question arises: why do some astronauts develop health problems, such as impaired eyesight, and others do not?

Getting under the skin
On Earth, the body is attuned to gravity, with the heart pumping fluids upwards. In weightlessness, the body does not need this function. This can result in modifications of fluidics in the body. The journal Radiology reported that about 60 percent of investigated astronauts had high fluid pressure in their skull, according to MRI data. Many astronauts suffered from space headaches (0.56 events/astronaut). In general, astronauts face the problem of bone loss similar to osteoporosis (up to one percent per month) and possess immune system deficits.

Skin impairments are one of the most frequent health problems that occur during space missions. For example, skin rashes are common on spaceflights. However, so far no major studies on the effects of extended space travel on human skin have been performed. There was one pilot study conducted in 2006 with a European astronaut who performed in-flight and post-flight skin measurements. Modifications of the dermis, the skin surface, and the hydration level were observed. Furthermore, the measured increase in the transepidermal water loss reflected an impairment of the barrier function of the outermost skin layer. It seemed the astronaut underwent an accelerated skin ageing process in space.

Skin problems, including impaired wound healing in space, need further research activities to protect astronauts’ health during long-term flights and to better understand ageing and wound-healing processes. Therefore, NASA and the European Space Agency (ESA) launched the ‘Skin B’ project, which covers pre-flight, in-flight on the ISS, and post-flight skin measurements on five astronauts. For the first time in space research, medical femtosecond lasers are being employed to obtain label-free optical biopsies with superior intracellular resolution on astronauts. Physically taken biopsies are not required to get a precise look inside the skin and to monitor modifications of the tissue architecture and the cellular metabolism.

The novel imaging technology is called multiphoton tomography (MPT). MPT was introduced by the German company JenLab, with facilities in Jena and Saarbruecken. So far, MPT is mainly used in major hospitals in Australia, California, Russia and Western Europe for early detection of skin cancer and to monitor tumour borders during neurosurgery. Furthermore, it became an important tool for major companies such as P&G, Chanel, L’Oreal, Beiersdorf and Shizeido to evaluate pharmaceutics and cosmetics, including nanoparticle-based sunscreens. In 2014, JenLab was awarded a New Economy Award in London and an IAIR Award in Milan for the development of the certified multiphoton tomograph MPTflex.

The Skin B project is ongoing. The in-flight measurements take place aboard Columbus (the ISS’s space lab module) to obtain information on skin hydration, the function of the skin barrier and the skin surface. Pre- and post-flight multiphoton measurements are performed at the European Astronaut Centre in Cologne. So far, ESA astronauts Luca Parmitano, Alexander Gerst and Samantha Cristoforetti have been studied. Parmitano launched on March 28, 2013 from the Baikonur Cosmodrome in Kazakhstan, Gerst on May 28, 2014 and Cristoforetti on November 23, 2014. Their journeys to the ISS were performed with the novel ‘express spacecraft’ and took less than six hours. Parmitano and Gerst spent almost half a year on the ISS. Cristoforetti is still working there.

On the ISS, skin physiology is different. Bioparticles from the stratum corneum are ‘floating’ in the air and may easily be inhaled. Mechanical friction is reduced. Microgravity impacts cellular metabolism, cell migration and reproduction.

Also the lower part of the skin, the dermis, changed. In particular, the extracelluar matrix components elastin and collagen underwent modifications. Interestingly, there was a strong increase in the amount of collagen and in the ratio of collagen to elastin compared with pre-flight conditions. This observation is in contrast to ageing effects on Earth. In fact, the monitored collagen-elastin ratio increase results in an ‘anti-ageing’ effect, as observed with certain cosmetic products on Earth.

However, thinning of the viable epidermis is of no advantage. Dangerous radiation, such as low-wavelength ultraviolet and cosmic radiation can reach the basal cell layer easily at the epidermis-dermis junction. That most important skin layer contains the stem cells and is also the location where skin cancer often starts. If an astronaut’s viable epidermis is only 30µm thin after a six-month expedition, his viable skin cell layers can likely shrink to less than two cell layers during a one-year Mars expedition.

The good news is the skin effects are reversible. When back on Earth, the epidermis of the two astronauts became thicker again. Studies are currently being conducted to monitor the repairing process and to evaluate memory effects. We will gain knowledge of the process of readapting to gravity.

Skin can be employed as an early recognition system for physical and mental health status. Further studies are recommended to understand why some astronauts show severe skin reactions, such as thinning of the epidermis, modifications of the dermis, and allergic reactions, before starting the trip to the Red Planet.