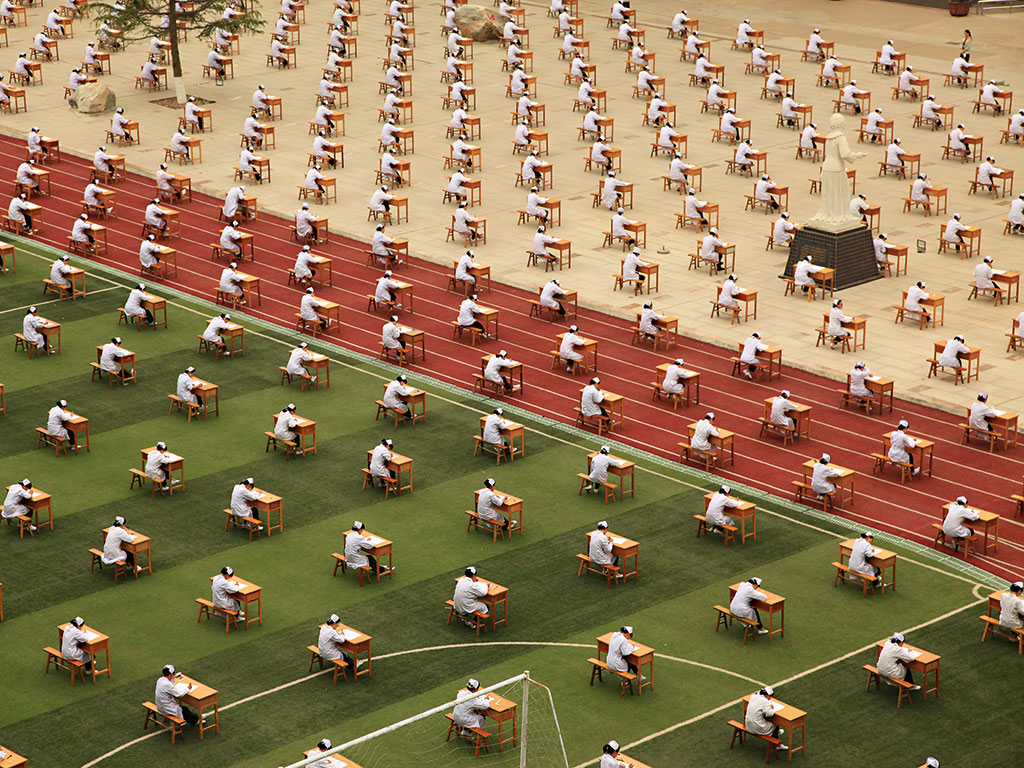 Nursing students take an exam in a sports stadium in China. Despite being the focus of economic strategies across the world, greater education alone does not lead to growth

In an era characterised by political polarisation and policy paralysis, we should celebrate broad agreement on economic strategy wherever we find it. One such area of agreement is the idea that the key to inclusive growth is, as then-British Prime Minister Tony Blair put it in his 2001 reelection campaign, “education, education, education”. If we broaden access to schools and improve their quality, economic growth will be both substantial and equitable.

As the Italians would say: magari fosse vero. If only it were true. Enthusiasm for education is perfectly understandable. We want the best education possible for our children, because we want them to have a full range of options in life, to be able to appreciate its many marvels and participate in its challenges. We also know that better educated people tend to earn more.

Education’s importance is incontrovertible – teaching is my day job, so I certainly hope it is of some value. But whether it constitutes a strategy for economic growth is another matter. What most people mean by better education is more schooling, and, by higher-quality education, they mean the effective acquisition of skills (as revealed, say, by the test scores in the OECD’s standardised PISA exam). But does that really drive economic growth?

Disappointing performance
In fact, the push for better education is an experiment that has already been carried out globally. And, as my Harvard colleague Lant Pritchett has pointed out, the long-term payoff has been surprisingly disappointing.

In the 50 years from 1960 to 2010, the global labour force’s average time in school essentially tripled, from 2.8 years to 8.3 years. This means that the average worker in a median country went from less than half a primary education to more than half a high school education.

As is often the case, the experience of individual countries is more revealing than the averages. China started with less education than Tunisia, Mexico, Kenya or Iran in 1960, and had made less progress than them by 2010. And yet, in terms of economic growth, China blew all of them out of the water. The same can be said of Thailand and Indonesia vis-à-vis the Philippines, Cameroon, Ghana or Panama. Again, the fast growers must be doing something in addition to providing education.

The experience within countries is also revealing. In Mexico, the average income of men aged 25-30 with a full primary education differs by more than a factor of three between poorer municipalities and richer ones. The difference cannot possibly be related to educational quality, because those who moved from poor municipalities to richer ones also earned more.

And there is more bad news for the “education, education, education” crowd: most of the skills that a labour force possesses were acquired on the job. What a society knows how to do is known mainly in its firms, not in its schools. At most modern firms, fewer than 15 percent of the positions are open for entry-level workers, meaning that employers demand something that the education system cannot – and is not expected – to provide.

Must try harder
When presented with these facts, education enthusiasts often argue that education is a necessary but not a sufficient condition for growth. But in that case, investment in education is unlikely to deliver much if the other conditions are missing. After all, though the typical country with 10 years of schooling had a per capita income of $30,000 in 2010, per capita income in Albania, Armenia and Sri Lanka, which have achieved that level of schooling, was less than $5,000. Whatever is preventing these countries from becoming richer, it is not lack of education.

A country’s income is the sum of the output produced by each worker. To increase income, we need to increase worker productivity. Evidently, “something in the water”, other than education, makes people much more productive in some places than in others. A successful growth strategy needs to figure out what this is.

Make no mistake: education presumably does raise productivity. But to say that education is your growth strategy means that you are giving up on everyone that has already gone through the school system – most people over 18, and almost all over 25. It is a strategy that ignores the potential that is in 100 percent of today’s labour force, 98 percent of next year’s, and a huge number of people who will be around for the next half-century. An education-only strategy is bound to make all of them regret having been born too soon.

Ricardo Hausmann is Director of the Centre for International Development