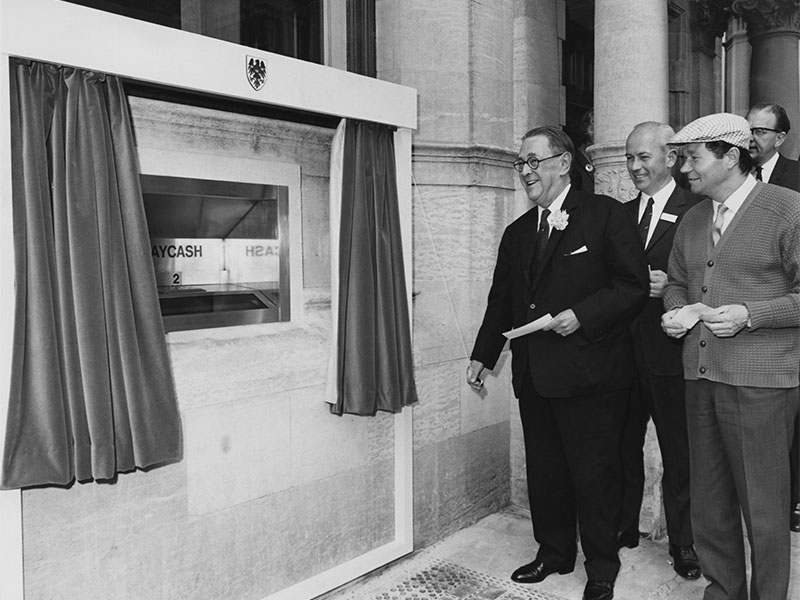 The first ATM, being unveiled by Sir Thomas Bland, Deputy Chairman of Barclays Bank, in 1967

The automated teller machine (ATM), the device that started the original fintech revolution, celebrated its 50th birthday on June 27. Despite their role in changing the way people access money, however, the future of ATMs may be in doubt as cashless transactions continue to rise in popularity. To remain relevant, ATMs may soon be outfitted to perform a whole host of new functions.

The first ATM was unveiled in Enfield, London, in 1967 by Barclays bank. The machine’s inventor, John Shepherd-Barron, designed the device after finding himself frustrated and without cash when he missed the opening hours of his local bank branch. The first machine dispensed a maximum of £10, and to prevent fraud read a trace radioactive signature on the cheque that was matched against a pin number. In the years since, ATMs have expanded their functions, with many now accepting deposits, selling concert tickets, and scanning fingerprints.

To remain relevant, ATMs may soon be outfitted to perform a whole host of new functions

But in the 50 years since the first ATM was unveiled, their relevance has slowly declined. With the ease of cashless transactions, the need for constant access to banknotes is not as important as it once was.

However, as the number of bank branches declines, ATMs may find new a new job filling roles that can’t be replaced by an app. Head of Auriga Consulting’s international business Mark Aldred said banks that aren’t adapting and embracing what their ATMs could do are missing out. “A combination of self-service machines and staff could be the ticket to reviving the dwindling number of bank branches”, Aldred said. “This hybrid approach appeals most to customers, if banks can strike a balance between customer autonomy and personalised support and advice.”

Aldred added that many banks are struggling to adapt their legacy systems to allow ATMs to perform additional tasks, but a shift to cloud-based systems is giving banks the flexibility needed. “What is needed is a mindset change from the current position of offering very limited services and reducing operating cost as the single most important focus, to a more optimistic outlook of expanding revenue-generating consumer services with operating costs being only one management metric”, Aldred said. “The ATM is on the brink of some very exciting developments – with technology like artificial intelligence, data analytics and chatbots poised to bring an even better experience – but without the right infrastructure in place banks could risk missing out.”