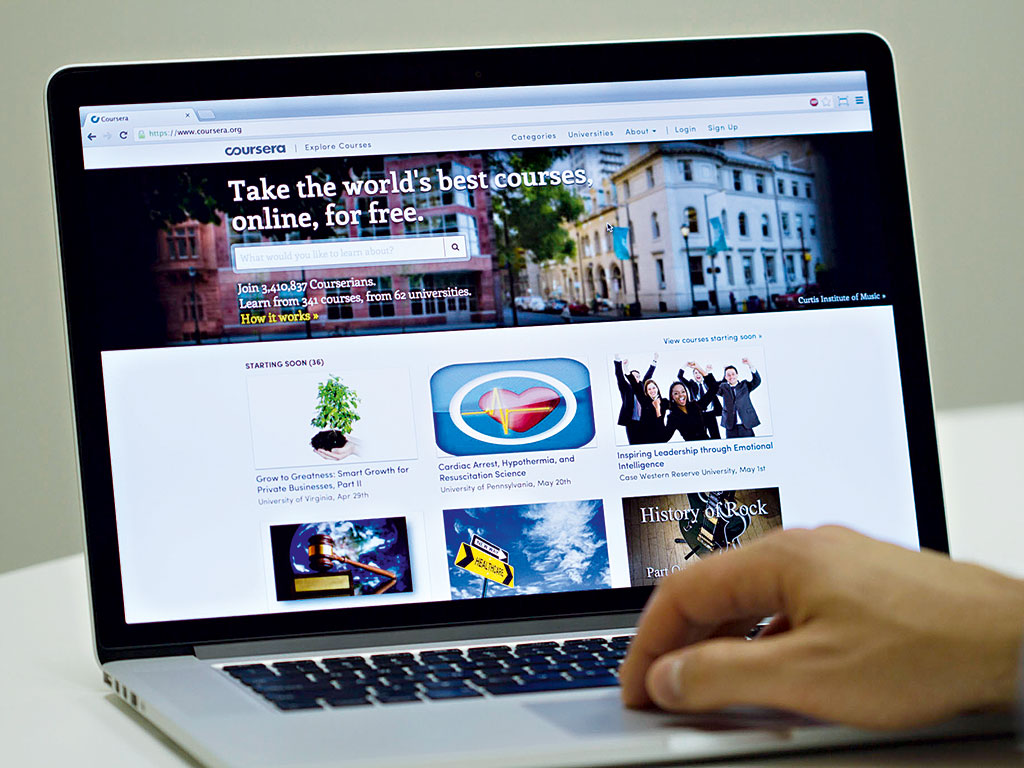 Coursera modules emulate as much of the physical learning experience as possible, such as meeting peers and tutors. The portal has made first-class education free to the world

As you click the ‘go to class’ button on the Coursera website to begin the company’s Financial Markets module, it feels similar to the bricks-and-mortar universities it is trying to emulate. Like many freshmen attending the same class on the first day of the semester at Yale University, Coursera students are greeted by the friendly face of Robert Shiller, Professor of Economics. You are prompted to introduce yourself to your peers and encouraged to check out the grading structure for the course, before getting stuck into the first lecture on basic principles of finance and risk management.

The fact that the experience feels grounded in reality is vital. The online course is designed to simulate, to the greatest degree possible, the experience any undergraduate attending the course at the actual university would have. Appealing little touches, such as the way students are encouraged to take part in events such as ‘final office hours’ (where they can ask the lecturer concise questions regarding any aspect of the course and have them answered, in person, from Shiller’s office at Yale) set it apart from other learning sites. These added extras exemplify the commitment of Coursera and the course organisers to bringing as many characteristics of the classroom through your laptop and directly into your living room as possible. The attention to detail not only provides users with a deeper learning experience, but also shows off the potential for Coursera and other online learning platforms to participate in something quite revolutionary: the democratisation of education.

The online course is designed to simulate, to the greatest degree possible, the experience that any undergraduate attending the course at the university would have

Innovative education
Coursera is an online education platform that works in partnership with top universities and organisations from around the globe, aiming to bring the best courses, taught by the best teachers, to everyone and anyone, for free. Since its inception back in 2011, it has been making great headway, with over 10 million users taking part in the 500-plus courses it has to offer. Even more impressive than that is the fact the company has so far raised over $80m in venture capital.

This has inevitably set cynics’ alarm bells ringing: it may seem surprising that opportunistic capitalists are showing so much interest in socialised education. But the reasons investors are willing to throw capital at Coursera become clearer after a closer look at the various monetisation methods the provider of massive open online courses (MOOCs) has attempted over its relatively short lifespan. In a 2012 blog post, the company boasted of the success certain students had enjoyed in securing employment after completing one of its courses. “One student recently told us how the Gamification course helped him land a position with a gamification company”, it states. “Another student, Dawn, accepted a communications position with the University of Illinois Cancer [Centre] after completing Fundamentals of Pharmacology.”

The preamble acts as a means of introducing the company’s plan to develop Coursera Career Services, a recruitment facility aimed at connecting their students (Courserians) with companies looking to poach prospective talent. Students were able to opt in to the scheme – which, given the state of the job market, many chose to do – while companies interested in enlisting high-performing students could expect to pay a flat fee for the privilege. Though the service has since been scrapped (presumably due to a lack of interest, as Coursera boasted just one fifth of its current 10 million members at the time), students should not be surprised if it resurfaces at some point in the future.

Raising funds
One model that continues to be a revenue raiser for the company is its ‘signature track’ program. It links completed coursework and exams to users’ identities, providing an authentic record of their achievements. In order to accomplish this, the program uses keystroke dynamics: by monitoring students’ unique typing patterns, it ensures they do not cheat by getting someone else to sit tests on their behalf. The program was launched in January 2013 and was initially only made available to a handful of classes, but has since been extended to cover many more. The program gives Courserians the opportunity to earn what Coursera calls ‘verified certificates’, which are issued in partnership with the participating university and act as a sort of mini-diploma.

“When we started offering our courses on Coursera, we aimed to extend the reach of our university’s intellectual strengths beyond our own halls, to a global classroom”, says Peter Lange, Provost of Duke University. “Now, we hope that these credentials, while they will not contribute directly toward a degree, will afford students around the world, of all ages, backgrounds and resources, an opportunity to have a legitimate credential for their work in order to advance their career or fulfil themselves personally.”

Though the certificates give a means of verifying successful completion of the course, students are expected to pay in the range of $30 to $100 per course for the privilege. While Coursera does offer a free ‘Statement of Accomplishment’ to its students, a number of courses no longer offer the option. Students’ protestations have not stopped the company raking in an astonishing amount of money from the certification scheme: in its first year alone, total revenues reached a staggering $1m. By April 2014, the company’s revenues reached $4m.

Currently, verified certification does not carry credit redeemable towards a bachelor’s or a master’s degree – all it does is prove the student has passed the online course and that they did so under their own steam. This could change, however. The possibility for formal acknowledgment comes from working alongside the American Council on Education (ACE) and its member schools, which have discussed the possibility of permitting the successful completion of Coursera’s signature track scheme to contribute two to three credits in a student’s academic application.

Academic reputation
In an interview with India’s leading business newspaper, The Economic Times, the CEO of Coursera, Richard C Levin, acknowledged that “the biggest obstacle is changing the mind-set” surrounding democratised education. His remarks are no doubt a reaction to the fact that, despite ACE’s recommendation, many institutions will likely snigger at the prospect of offering students from such an educative background the opportunity to stand on the same podium as the students that enrol ordinarily in their courses. And why shouldn’t they? Education is big business, and the institutions at the top of the pyramid offer a premium product. But there is still another option available to MOOCs: obtaining the acknowledgement of potential employers.

In the current job market, where competition for places is fierce, students and the unemployed are desperate for any quality that can set them apart from the rest of the herd. According to statistics published by Coursera, most of the students who have enrolled with it do so while also working full-time; most likely engaging in the courses for recreation or to assist in finding alternative means of employment. Yet around 20 percent are unemployed, while just over 14 percent have part-time jobs.

At this stage, it is impossible to determine if businesses will see the merit in these new forms of learning, which some would dismiss as pale imitations of traditional institutions – a modern day correspondence course. But something that both MOOCs and younger students have working in their favour is time. The CEOs, executives and middle managers of today will eventually retire, die or otherwise move on, and their cultural values and beliefs of what defines a valuable education will disappear along with them. The young people of today will grow to take those management roles, and the stigma that exists around alternative educational methods will evaporate as these new leaders establish themselves within the business community.

Changing industries
One thing that is certain is that the price of higher education has, in many countries, become extortionate. Learning is meant to be an investment, but student loan debt in the US currently stands at over $1trn, and is constantly rising. It is a problem that can only get worse. The added threat that rising costs might deter future students from going to university could have severe, long-lasting effects – especially in a world where technical skills will become ever more important to gaining employment.

MOOCs provide a secure alternative, and one that comes at a fraction of the cost. “When Google came out, it had a profound impact on access to information”, Levin told tech news site Re/code. “The first order wasn’t to drive Encyclopædia Britannica out of business. Though they eventually did.”

However, there are those who believe MOOCs are not doing enough. Sir John Daniel, former Vice-Chancellor of the UK’s Open University, attacked Coursera for not publicly offering up the course materials it creates in partnership with institutions under the Creative Commons Licence: the licence that allows authors to give others the right to share, use and build upon work that they have created.

“While MOOCs have open enrolment, many of the MOOCs offered through commercial partners do not have open licences… It would be a pity if MOOCs were to act as a brake on the open education movement”, Daniel said at the Worldviews Higher Education and Media conference in Toronto last year. “Attempts to monetise internet activity usually degrade the user experience. Copyrighting MOOCs’ content rather than making it available as [an] open education resource is a good example.”

In Daniel’s view, there are two very different ways of interpreting what ‘democratising education’ means: one view centres around the idea of increasing and widening access to higher education; the other suggests giving students greater control over the content that makes up their curriculum.

Taking control
The fact that Coursera does not own the content of its participating commercial partners (which, in this instance, are the established educational institutions) means those organisations still hold all the power. That educational establishments have been unwilling to fully open up their courses to be shared, used and built upon highlights that they are not joining forces with MOOCs for altruistic purposes, but because they recognise this is the direction in which education is heading. They are complying to the extent to which they are happy, but are not willing to give up their control completely.

For now, Coursera gives wider access to education, and while, as a society, we are a long way from truly democratised academia, the strides that are being taken are definitely in the right direction. But it will take time for massive open online courses such as Coursera to build upon what they have created. Look at how major television networks have had their monopoly eroded by the force of the internet, with content providers such as Netflix driving down prices. The music industry has faced a similar situation, with record labels seeing their power diminished at the hands of file-sharing sites and streaming services such as iTunes and Spotify. It seems that education institutions are just the next industry on the internet’s hit list.