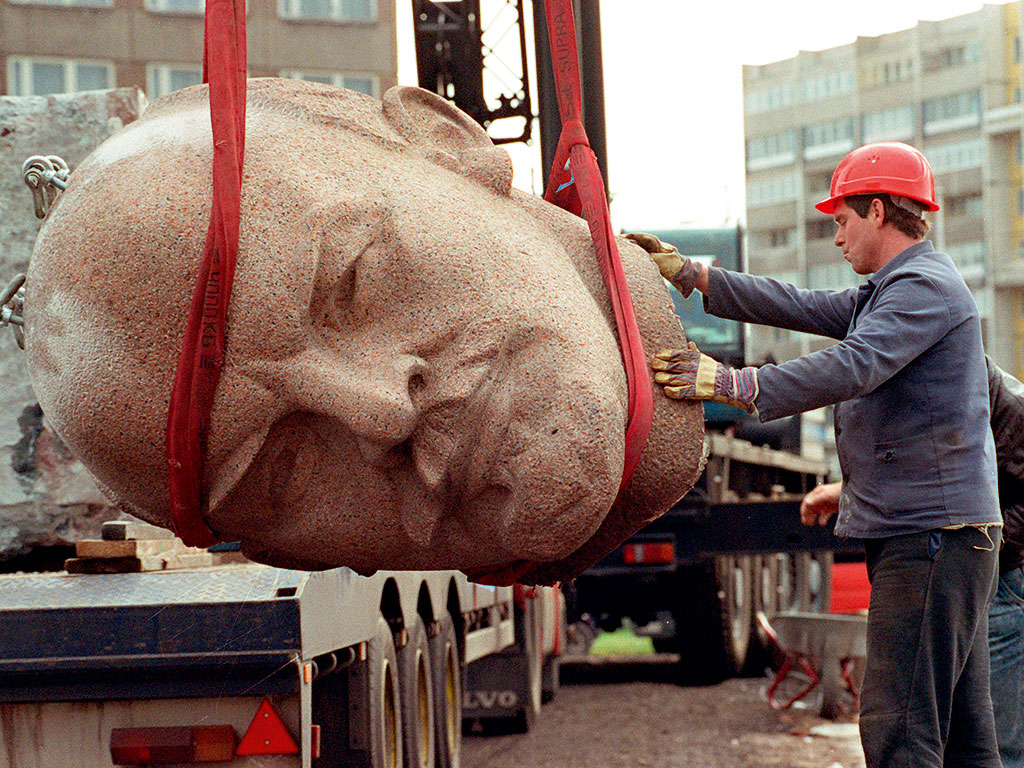 A statue of Lenin is dismantled in Germany, 1991. The Soviet leader saw electrification as key to the modern nation-state

Lenin once said his vision for Russia was Soviet power plus the electrification of the whole country. While talk of Soviet power has waned, most still recognise the importance of electricity as a foundation for economic progress in the developing world.

In the 20th century, often inspired by the example of the Soviet Union, many developing nations emerged from colonialism with grand plans for electrification and industrialisation. Yet decades later it is evident that many of these large scale modernisation projects failed, going unheeded or awry and leaving much of the developing world with poor access to electricity. Just as the state sector failed to provide in the Soviet Union, so the provision of energy by states has failed in many parts of the developing world.

A number of new technologies allow electricity to be generated without the involvement of the state. Old technologies are being rejigged and new technologies refined. Small Modular Reactors (small units able to provide nuclear energy) offer an alternative to large looming nuclear power plants, while companies such as Tesla have transformed battery technology into a viable means of powering homes, as private backers roll out local solar power programmes across the developing world.

Energy poverty
Nonetheless, over 1.5 billion people still lack access to electricity, according to the UN, and a further one billion are without a reliable source of energy. This means no refrigerated storage for perishable goods or medicines, while heat for cooking must be generated by burning wood or other polluting resources, increasing the risk of lung and heart disease. As a result, according to the Borgen Project, “3.5 million people each year die from indoor pollution caused by the smoke when cooking on wood and biomass cookstoves”, and local medical facilities are often unable to use vital medical equipment.

Of them live in Asia or Sub-Saharan Africa

People die each year due to inhaling cooking smoke

The extent of energy poverty varies by country, with rural areas often more afflicted. For instance, according to Morgan D Bazilian, writing in Foreign Affairs, “in Liberia… just two percent of the population has regular access to electricity”. Even where states have been able to provide some semblance of a national grid, it is often patchy. Bazilian notes, “in Tanzania, nearly 50 percent of firms say that poor electricity service is a major constraint for doing business”, and that they face an average of nine power outages a month.

Even countries with a more developed national infrastructures struggle. The Economist explained that, in Vietnam, “daily life is punctuated by brownouts”, i.e. electricity supply does not completely cut out but the voltage supplied dims. As the Borgen Project notes: “Nigeria produces the highest quantity of oil in Africa, yet it has the second highest number of people without safe energy in the world (behind India).”

Small solutions
Developing nations have, in the past, dreamt of creating national energy grids, with many seeing nuclear as an opportunity. However, with the exception of a few countries, attempts at this have been fraught with problems. “A nuclear power generation programme not only requires financial resources necessary for acquiring reactors and constructing plants, but also necessitates institutional and human resource capacities, including operational expertise, regulatory expertise, spent fuel management plans and site, non-proliferation commitment, among others”, says Jane Nakano, a Senior Fellow at the Centre for Strategic and International Studies. Malcolm Grimston of the Centre for Environmental Policy at Imperial College London agrees. Nakano told World Finance the main disadvantage of developing economies pursuing nuclear power is that it is “highly capital intensive” and requires “government access to large investment funds”.

One new technology that could soon take off in the developing world is the Small Modular Reactor (SMR). According to the Institute of Mechanical Engineers, SMRs can be easily adopted in technologically deprived developing nations and installed with minimal technical skill. The manufacturers can carry out refuelling of the reactors, so the state need not educate and maintain an expensive army of nuclear engineers. One SMR model being developed in Japan could be delivered from the factory with enough energy to operate for 30 years, and then either be refuelled by the relevant experts or returned.

SMRs could provide power to industry and homes in a particular area without any major initiative from the state beyond perhaps providing money for the initial purpose. Even then, local industries, wealthy philanthropists or NGOs could provide the money for their purchase and maintenance.

Such modules can be used to slowly build up a larger energy infrastructure in a more flexible way and could be clustered in one plant to replicate the output of a larger, traditional nuclear power plant. This incremental build up is more appealing to private investors, who are unwilling to commit outright to the large sunk costs required to build a complete plant.

Leapfrogging the state
The provision of renewable energy sources by private groups is also becoming more prevalent in Africa. The charity Solar Aid claims to be working to provide “access to solar lights in some of the most remote regions of the world”. This year Access Infra Africa, a Dubai-based firm, will launch Africa’s largest privately owned solar plant in Uganda as part of a larger plan to provide renewable energy to 17 African nations.

According to Achim Steiner, Executive Director of the UN Environment Programme, speaking at a UN Climate Change Conference at the end of last year, “if you are in Africa and decide to exploit your wind, solar and geothermal resources, you will get yourself freedom from the global energy markets, and you will connect the majority of your people without waiting for 30 years until the power lines cross every corner of the country”.

Headed by celebrity entrepreneur Elon Musk, Tesla recently revealed a new battery called the Powerwall. These rechargeable batteries rely on lithium-ion, coming in 7kWh or 10 kWh sizes. There is also a larger version, able to store greater amounts of energy, intended for use by businesses. “In a lot of places there are no utility lines”, Musk said at the launch of the Powerwall in May. “This allows you to go completely off grid. It’s analogous to the way that mobile leapfrogged landlines.” By leapfrogging utility lines, the role of the state in energy provision is also being passed over.

National grids have often served as key institutions of nation-states

These new batteries also offer an alternative to energy provision where developing nation governments have failed. As the Mail & Guardian noted, Sub-Saharan African and Asia, where 97 percent of those without electricity links live, “could be good locations for so-called microgrids – self-contained systems of solar panels and batteries”.

Peter Asmus, an analyst with Navigant Consulting, told the Mail & Guardian these batteries are being sold for $3,000, which is around triple the per capita gross national income of Sub-Saharan Africa, though prices are expected to fall. Communities could pool resources to purchase a battery, or wealthy donors could pay for them. Alternatively, private businesses in remote locations could purchase such batteries. Whichever way the capital is provided, there are a number of ways local communities could make use of such batteries without waiting for a national grid provided by the state.

Outsourcing institutions
While the more immediate and secure provision of electricity is a cause for celebration, there are some concerns to consider. Historically, the provision of electricity through a national grid has solidified the legitimacy of nation-states – which is no small task in much of the developing world, where loyalties frequently transcend colonial-era borders. National grids have often served as key institutions of nation-states, helping to unify a polity and providing the first point of interaction between far-flung rural inhabitants and distant seats of political power.

A nation-state relies upon its members seeing themselves as citizens of the state. In their book Volunteer Tourism: The Lifestyle Politics of International Development, Jim Butcher and Peter Smith suggest the rise of NGO volunteer agencies and the associated concept of “global citizenship” has “outsourced citizenship”. In the same way, the provision of energy by third parties could outsource the state. This is part of a wider trend in which other non-state actors, such as the International Criminal Court and global health charities, have assumed functions previously provided for – and key to the defining of – the state.

However, any move towards decentralised energy also has the potential to offset any hope of actual industrial transformation and economic growth. While the worst excesses of poverty may be relieved by decentralised energy, one proven way to abolish poverty is to create a modern industrial economy – which often goes in tandem with the creation of a national energy grid. Some advocates of decentralised energy openly voice their lack of enthusiasm for any major economic transformation. For instance, the NGO Practical Action advocates decentralised energy provision in the developing world on the grounds that “rural people only need small amounts of energy” to increase their quality of life. But such an approach merely entrenches rural poverty; access to cheap, abundant and reliable electricity is required for real economic development and the provision of life styles found in the developed world. Technologies such as SMRs and Powerwalls have the potential to provide this, so long as they are able to generate energy not just to power homes but industry as well.

Just as robotics raises the spectre of human labour being displaced by machines, decentralised energy provision born of technological change could also displace one key function of the nation-state. Of course, the nation-state, though bereft of its role of energy provision, will endure, but for many in countries where interaction with the state by rural citizens is already rare, the state could become even more distant.