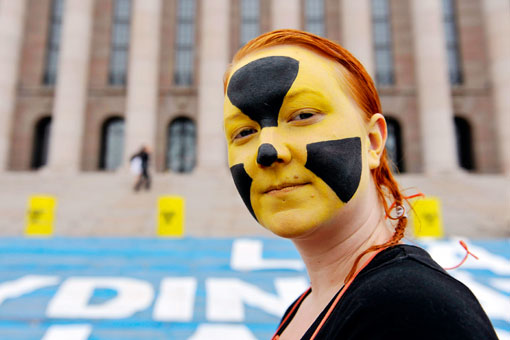 Matti Pahkala braces from the chilly winds blowing in from the Gulf of Bothnia as he surveys a map of the Hanhikivi peninsula in northern Finland, an area he first visited as a child. As then, the shore is lined with rocky beaches and vegetation, much of it untouched for hundreds of years. Nearby, birch and aspen trees rustle, scattering yellow autumn leaves.

That landscape is about to change dramatically after Finnish nuclear consortium Fennovoima recently announced that it will build a reactor here, the first nuclear reactor site to be announced since the March nuclear plant disaster in Fukushima, Japan.

While environmentalists worry about damage to the area’s natural habitat, Pahkala, who is chairman of the local Pyhajoki municipal board, couldn’t be more excited. He expects Fennovoima’s investment of ¤4-6bn will bring more jobs and new business, meaning greater tax revenue to an area that sees a large majority of youngsters leave for bigger towns each year in search of better jobs and education.

Around 3,400 people live in Pyhajoki, with many working at steel maker Rautaruukki in Raahe some 30km away, and the rest working in small local business and farming. Local student Heini Mattila said the reactor could help Pyhajoki avoid merging with neighbouring towns as many small Finnish municipalities have been forced to do to cut costs.

“It will bring more jobs and life to this village. Otherwise we might have to soon consider joining the town of Raahe,” Mattila said. The unemployment rate in Pyhajoki is hovering around the six percent mark, not much different to the country’s average.

But local unemployment shot to around 15 percent as recently as early 2010 as a nationwide recession prompted lay-offs. Some fear this could happen again, with economists predicting Finland could tip into recession again as Europe’s debt crisis hits exports such as metals, paper and ships.

Cheap power
Finland sees nuclear energy as a means to cut greenhouse gas emissions while supplying a steady source of energy for industry. It is also trying to curb dependence on energy from Russia on fears that economic growth could push up prices and impact deliveries. Its four nuclear reactors produced 25 percent of electricity used in Finland last year, while 12 percent was imported, mainly from Russia.

Fennovoima was set up in 2007 to produce electricity for its consortium members consisting of Finish power and industrial companies. Members include steel makers Outokumpu and Rautaruukki, although its biggest single shareholder is German utility E.ON’s Finnish subsidiary.

In 2010, it and Teollisuuden Voima (TVO) won parliament’s approval to construct new nuclear reactors, which are expected to come on line by around 2020 and raise the number of reactors in Finland to seven. The forest businesses and steel makers depend on cheap electricity, and those sectors are vital to Finland’s economy, particularly now that Nokia is no longer the growth driver it once was.

While Finland launched a review of nuclear safety after the Fukushima disaster, authorities found no need for changes at the reactors in operation, although they asked TVO and Fortum for more information on back-up plans for extraordinary events. There was no talk of halting Fennovoima’s project.The position contrasts sharply with others in Europe. Following Fukushima, Germany  decided to phase out nuclear power for the forseeable future.

Protests by the anti-nuclear movement have gained little political traction in Finland. Although the Green’s party has been against nuclear energy and voted against allowing new reactors, it is part of a coalition government that includes nuclear advocates. Economy Affairs Minister Jyri Hakamies, who is responsible for energy issues, said Finland’s decision to stay on course with its nuclear plan reflected the “rational, pragmatic” nature of its people.

Bomb in the backyard
But critics say Finland may be underestimating the risks and overestimating the benefits of nuclear power. Many point to construction delays and ballooning costs at Olkiluoto 3, Finland’s fifth reactor, as proof that nuclear energy doesn’t always go well as planned. The promise of more jobs means little for pensioner Tuula Wallin, who has lived for 20 years just 5km from the planned site. “It is like a bomb in the backyard,” she said, her voice trembling.

“How come these people planning this have not come to their senses, despite Chernobyl and Fukushima? My child and grandchildren live here in Pyhajoki, and I’m scared thinking about their future.” Environmentalists say the nuclear plant will disrupt the area’s natural habitat. There are few signs of human activity on the peninsula – a road and some wooden cabins without electricity or modern plumbing and used only in the summer.

Local environmental association Pro Hanhikivi, which is cooperating with other conservation groups as well as Greenpeace to oppose the reactor, says the peninsula is home to a variety of threatened and protected wildlife and a resting and feeding place for migrating arctic birds.

There are some nature conservation sites near the planned plant, including some areas designated in an EU programme aimed at protecting threatened species and habitats. Some of the area’s streams, springs and rocks are part of Finnish biodiversity programmes. While the reactor will avoid most of these areas, critics say they are so close that the impact is unavoidable.

Excitement comes to town
Fennovoima will have to negotiate with some landowners over the 80 hectares of the 450-hectare site it does not already control, and some of those are residents of the neighbouring village of Parhalahti who are likely to put up a fight, said Pro Hanhikivi vice chairwoman Hanna Halmeenpaa.

Pro Hanhikivi has also complained to the European Commission and a European Parliament petition committee that Finland is not obeying directives on protecting threatened species and habitats. “The question is can this area of various threatened habitats be split up for industrial use, or should it be protected,” Halmeenpaa said. “We are prepared for a long battle.”

When news of the site selection broke it created a rare buzz in Pyhajoki’s normally sleepy village centre, bringing local politicians, business leaders and media to Fennovoima’s small office to hear Chief Executive Tapio Saarenpaa’s plans for construction work due to begin in 2015. “Our home has been announced and it is here,” Saarenpaa said.