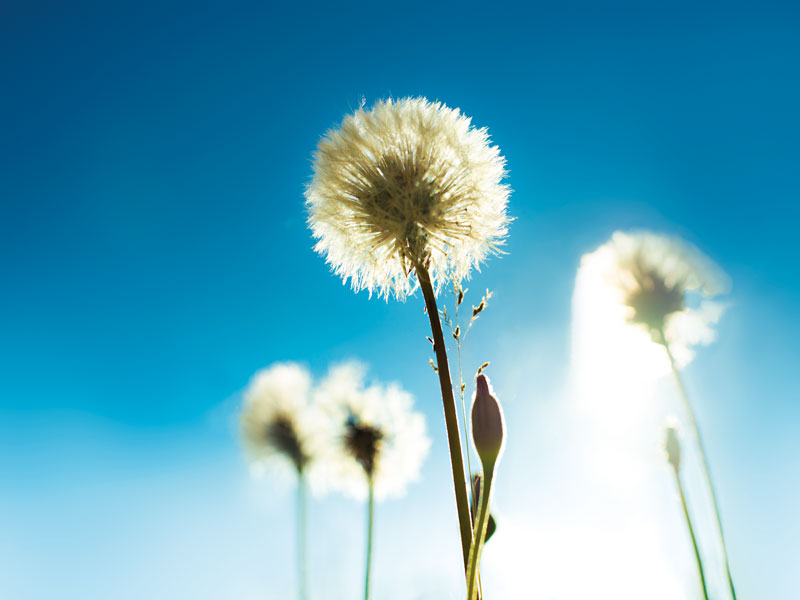 Germany aims to cut its greenhouse gas emissions some 40 percent by 2020. This target rises to 55 percent by 2030 and 95 percent by 2050 when compared with 1990 levels. Many other countries across the world have issued similar pledges.

The bad news, though, is this won’t be good enough: efforts to decarbonise the global economy have been delayed to such an extent that reducing emissions now comes too little, too late.

Climate prediction models indicate that, in order to meet the targets established by the Paris Agreement, carbon dioxide (CO2) will have to be removed from the atmosphere on a substantial scale.

In fact, scientists now estimate limiting the global temperature rise to two degrees Celsius above pre-industrial levels will require 10 billion tonnes of CO2 to be removed from the atmosphere every year from 2050 onwards.

Reforestation is the most natural way of sucking carbon out of the air, but this is time consuming and would need to take place on a gigantic scale. As global populations increase, convincing governments to plant trees on spare land, rather than build homes, is a difficult sell.

Other businesses are looking at carbon capture and sequestration techniques that trap CO2 before it reaches the atmosphere, but this approach is often only carbon-neutral at best.

In order to solve the planet’s carbon conundrum, a number of businesses have started thinking outside the box, employing cutting-edge technology to remove existing CO2 from the planet’s atmosphere. In many cases, their ideas have proved to be effective; whether they are financially feasible is another matter entirely.

Removal service
With the likelihood that humanity will be able to curb its CO2 emissions in time to avert catastrophe looking increasingly slim, a number of businesses have begun to search for alternative options. Their approaches to CO2 removal vary widely, with each methodology bringing its own advantages and disadvantages.

One of the more unusual ideas involves supplying natural gas to a high-temperature fuel cell. Half of the energy created is converted into electricity, and the other half is used to decompose limestone into lime and CO2.

As this activity produces CO2, it may not initially be clear how it helps with the planet’s greenhouse gas problem. However, the entire process is actually carbon-negative. As all of the CO2 being produced – both from the fuel cell and the lime kiln – is pure, it can be used or stored underground at a low cost. The lime can also be used to trap CO2.

The company pioneering this method of carbon air capture, Origen Power, estimates it can remove 600g of CO2 from the air for every kWh of electricity generated. In contrast, electricity produced by burning natural gas typically emits around 400g of CO2 for the same energy output.

Organisations like Canada’s Carbon Engineering and the Zurich-based Climeworks have opted for a different approach, utilising direct air capture technology. The latter develops, builds and operates plants that capture CO2 from ambient air through a cyclic adsorption-desorption process.

“At the heart of the process is a filter material, which selectively captures CO2,” Louise Charles, Communications Manager at Climeworks, told The New Economy. “The first step involves air being drawn into a collector using a fan.

“CO2 is then captured on the surface of a filter material – also known as the adsorption stage. The second step begins when saturation has occurred. Then, the collector is closed and the temperature increased to 100 degrees Celsius, releasing the CO2 (desorption) at a purity of over 99 percent. The CO2 is then cooled to 45 degrees Celsius, collected and delivered where necessary.”

Cost of carbon removal (per tonne)

It should be remembered there is no silver bullet to the problem of climate change. The disparate ideas that businesses like Origen Power and Climeworks are exploring may all need to be deployed together if a decarbonised future is to be achieved.

Ultimately, a combination of renewable energy investment and carbon removal solutions may be the only way to avoid an environmental disaster in the coming years.

Costing the Earth
The suitability of carbon-removal projects is not in doubt – their affordability is. In 2011, a study led by researchers from the Massachusetts Institute of Technology found that, when focusing on ambient air, the cost of carbon removal was likely to be more than $907 per tonne of CO2 removed.

Although they are not truly carbon-negative, powerplant scrubbers can boast a figure of between $50 and $100 for every tonne of CO2 prevented from reaching the atmosphere.

Recently, however, scientists have become increasingly optimistic that carbon removal is not as expensive as first feared. An updated analysis, published in June, suggested carbon capture could be achieved at a price between $94 and $232 per tonne if existing technologies were scaled up. Many of the businesses working in this field are working on the assumption that their current costs can be significantly reduced.

“We are already commercially viable and, as we continue to develop our technology, we will become increasingly cost competitive across the world,” Charles explained. “We have a detailed cost-reduction roadmap in place and are confident we’ll reach a price level of $200 per tonne of CO2 in three to four years’ time. Our long-term goal of $100 per tonne of CO2 is achievable within the next five to 10 years – or by 2030 at the very latest.”

Scaling up will be key to optimising outgoings, and progress on this front has been steady, if not spectacular. When Climeworks was founded in 2009, it was only capable of removing a few milligrams of CO2 in a 24-hour period; now, several tonnes are being captured every day.

The company is aiming to scale up by a factor of one million in the next five to 10 years in order to make a broader impact. To achieve this, more customers and additional funding will be required.

The next step
Carbon capture, in one form or another, has been implemented since the 1970s, but the technology’s progress has been slow. Globally, there are 17 large-scale plants dedicated to carbon capture, most of which are in the US. Altogether, they remove around 40 million tonnes of CO2 per annum – equivalent to just one percent of yearly global emissions.

Guaranteeing these facilities receive the right government support will be vital to their development. Subsidies for carbon removal need to be implemented to ensure the right economic incentives are in place for firms. Renewable energies have benefitted hugely from this approach and there is no reason why CO2 removal wouldn’t similarly profit.

Businesses also need to think carefully about what they do with the CO2 once they remove it from the air. Making it into synthetic fuels is one option; burying it underground is another.

Charles said her company “sells high-purity, high-concentration, air-captured CO2 to the food, beverage and agriculture market, [as well as] for the synthesis of renewable fuels and materials”. By forging external partnerships, carbon-removal firms gain access to additional revenue streams and ensure companies can purchase sustainable supplies of CO2.

It is regrettable that mankind has reached a stage where reducing carbon emissions will not be sufficient to stop temperatures exceeding globally agreed targets. But all hope is not lost: while CO2 removal can’t turn back the clock on decades of polluting human activity, it could provide a way to avoid the potentially devastating consequences of climate change.