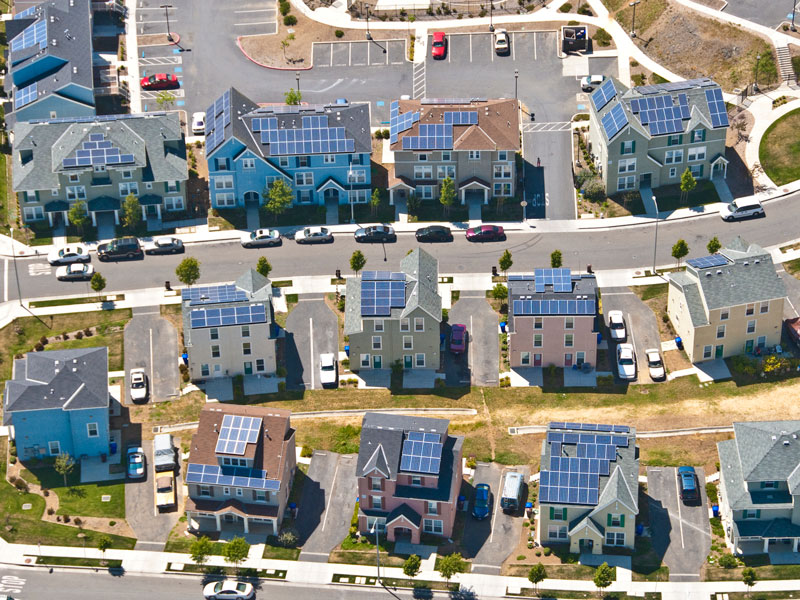 Many homes in California are already fitted with solar panels. However, in an attempt to increase the state’s renewable energy usage, the new law will make it a legal requirement for all homes built after 2020 to do so

From January 1, 2020, each new home built in California will be equipped with solar panels under new building regulations approved by the California Energy Commission.

The Golden State is on a mission to reduce greenhouse gas emissions by 40 percent from 1990 levels and ramp up its renewable energy generation so it makes up half the state’s electricity consumption by 2030. Renewables accounted for 27 percent of total energy generation last year, while solar generation made up 10 percent of the total, according to the Los Angeles Times.

Renewables accounted for 27 percent of California’s total energy generation last year, while solar generation made up 10 percent of the total

However, The New York Times reported the new regulations are expected to drive house prices up by between $8,000 and $12,000 in a state where housing is already considered to be too expensive in many areas. While shares in solar companies surged following the announcement on May 9, housebuilder share prices fell.

California Energy Commissioner Andrew McAllister said the solar requirements, along with updates to heating and lighting standards, would drive efficiency and lower costs in new buildings. The commission estimated the new standards will cost residential homeowners an additional $40 a month on their mortgages, but consumers will save $80 on monthly utility bills.

Morten Lund, Chair of the Energy Storage Initiative at law firm Stoel Rives, told Bloomberg the news was “massive”. “Essentially, this could turn residential solar into an appliance, like a water heater,” he added. “There has always been a certain inevitability about that outcome, but this is moving faster than most of us thought likely.”

California, the most populous state in the US, is undeniably the nation’s leader when it comes to solar power, thanks in part to the state’s abundance of sunshine as well as its green energy-friendly public policies. While it hopes its solar requirement will eventually become a standard across the US, critics are wary that the policy may not be the best way forward; California’s grid operator is already struggling to accommodate the state’s current supply of solar energy.