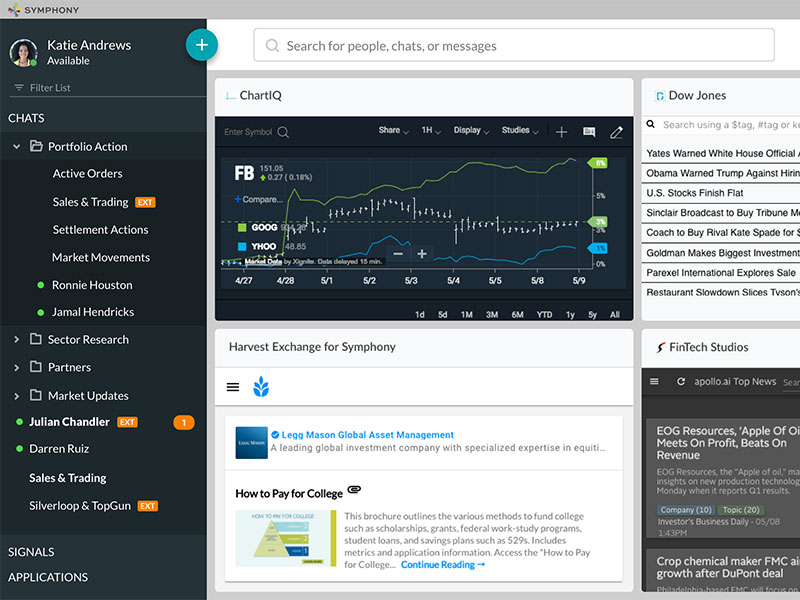 Symphony's desktop application. The product is set to rival Bloomberg Terminal as a business communications hub

Symphony Communication Services, a company that provides a secure messaging service to some of the world’s biggest investment banks, has raised $63m in a funding round led by French bank BNP Paribas. Reuters reported that, according to a source familiar with the funding, this latest investment gives the company a valuation of $1bn.

Born in 2014, when a group of banks led by Goldman Sachs bought instant messaging software company Perzo, Symphony has been dubbed the ‘Bloomberg killer’. Many of Symphony’s investor/customer banks, including the likes of Bank of America Merrill Lynch, HSBC and JP Morgan regarded the Bloomberg Terminal as an expensive and excessive product, providing data in quantities too large to be useful for traders.

WhatsApp has over a billion regular users, but, at the time it was bought by Facebook for $9.3bn last February, it had never made a profit

Symphony combines an instant messaging service with a heavily pared down alternative to a Bloomberg Terminal’s functionality. It offers voice and video chat and, as with other business messaging services, users can download specific add-on apps they require. Since Symphony is currently only used by investment banks, the list of available apps is small and finance-specific. This streamlined service attempts to do away with the data oversupply deemed problematic with Bloomberg Terminal.

Symphony is pursuing a different business model to other corporate messaging apps, such as Slack. Rather than drawing in millions of users with the lure of a free service, Symphony has built a niche customer base willing to pay. The market for messaging apps is dense and even those with a large user base are hard to monetise. WhatsApp has over a billion regular users, but, at the time it was bought by Facebook for $9.3bn last February, it had never made a profit.

Financial service companies have to meet strict compliance guidelines, such as retaining and scanning all digital communications between staff. In an interview with Bloomberg, David Gurle, Symphony’s CEO, explained that this is where Symphony has an edge on Slack. Symphony is designed to ensure compliance criteria are met using, for example, built in filters and warnings in chat rooms.

Symphony plans to expand its user base beyond financial services by capitalising on its ability to help companies meet compliance requirements in other heavily regulated industries, such as healthcare and law.

Reuters has also reported that Symphony plans to attempt to expand into Asia; a large office has been established in Singapore and Gurle has relocated there. However Asia may prove a more difficult market to penetrate thanks to the ubiquity of WeChat, a hugely popular app used for everything from booking doctors appointments to managing all types of social media.