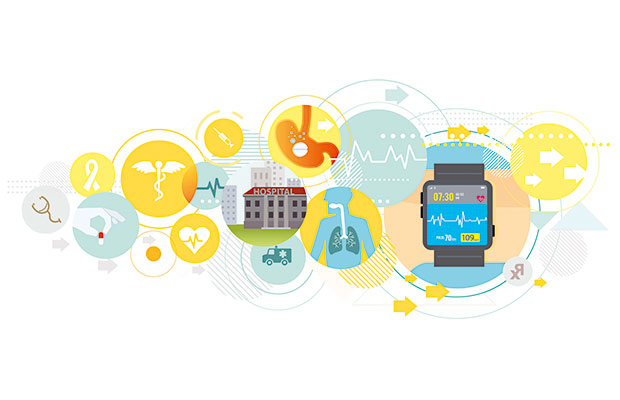 Healthcare is an incredibly data-rich industry. The opening up of information is a huge step that could see significant gains both clinically and in terms of care quality

Apple is jumping on the healthcare technology bandwagon with its new ‘Health’ app, an integral part of iOS 8. Health will create a personalised health display for the user.

The comprehensive, individualised data set will measure vital signs, weight, activity and diet. There are also plans for a developer toolkit called HealthKit, in which Health app users will be allowed to share their statistics with other health app makers.

By sharing the data between apps, Apple will be able to improve the performance of the apps themselves, and also provide personalised advice for users, ranging from tips for a better workout to automatic calls to a physician if there are signs of danger in a user’s vital signs and data.

The US-based software company has a sophisticated platform for healthcare providers to archive medical records digitally. Because it services some of the biggest healthcare players in the US (including the Cleveland Clinic, the Dartmouth-Hitchcock Medical Centre, and several Kaiser Permanente health plans), it has been one of the biggest beneficiaries of a federal programme that reimburses healthcare providers for adopting a digital record-keeping system.

It might not come as a surprise that Google has its fingers in the healthcare pie, as the company tends to cast its net wide when it comes to innovation. Google Fit, its open specialised platform for fitness-tracking apps, was launched in June, and unifies and collates the data collected by sensors on wearable gadgets.

This is not Google’s first attempt to break into healthcare; in 2012 it discontinued its digital health record service, Google Health (launched in 2008), as it “didn’t catch on the way we would have hoped”.

The international drug giant Merck has been a pioneer in investing in digital healthcare start-ups through its venture capital arm. So far the company has focused its efforts on remote monitoring, data analysis and personalised medicine.

Some of Merck’s most notable investments include: GenomeDx, a company developing genomic tests for prostate and urological cancers; Preventice, the company behind a patient monitoring system that can track biometric indicators such as heart rate through wearable sensors; and ElectroCore, which has developed technology to treat headaches with electrical signals.

Microsoft has been tentatively getting involved with health records since 2007, when it launched its HealthVault software. The web-based platform allowed individuals and healthcare professionals to digitally manage medical records.

The software has since been adapted for mobile drives, and can connect to a variety of third-party apps to manage prescription information or track fitness data.

Microsoft has declined to share how many people use HealthVault, a free service, though it is still not a major focus of its business. However, other healthcare companies are using the software to collect data digitally, especially things such as answers to electronic clinical questionnaires.

The healthcare sector, perhaps more than any other industry in the world, is extremely data-rich. Every hospital admission, every drug trial and every new treatment is carefully researched, logged and documented; after all, when it comes to healthcare, the tiniest bit of information can be a matter of life and death. But as data management systems have evolved, the healthcare industry has been largely reluctant to invest in big data facilities – until now.

According to researchers at McKinsey & Company, over the past 10 years pharmaceutical companies and healthcare providers have been aggregating the vast amounts of data they gathered over the decades into medical databases; pharma companies have made their research available, while payers and providers have digitalised patient records. Meanwhile, the US federal government has also opened up its healthcare data and knowledge resources: a vast treasure trove of clinical trial data, and patient information from public insurance programmes. This is seriously big data and it is almost as if the term (used to describe a data set so large and complex it cannot be stored or analysed using conventional databases and management tools) was coined specifically to describe healthcare data. With the tools and technology now available to store, analyse and provide insights into big data, the possibilities – and opportunities – are endless.

“[Even] at the best institutions, doctors and nurses are going room to room each day to mark down which patients meet which quality metrics and whether they’re addressed,” wrote Dan Riskin, a US doctor, in Forbes. “The result is a manually-entered, cumbersome flow chart that can, at best, address a handful of the hundreds of known quality measures and use limited data to address these. With a condition like deep-vein thrombosis, for example, hospital staff rely on manual calculations to assess the risk of a patient. The problem is, if not treated properly, mortality rates rise. The real tragedy is that the information needed to properly assess the patient’s risk and determine treatment is… in the clinician’s notes, but without the proper tools, the knowledge remains unavailable and hence unused.”

Final frontier
The opening up of information is a huge step for an industry known for its secrecy. Due to the huge investments pharmaceutical companies make to develop new drugs and treatments, until now there has been very little incentive for them to share their findings. But as analytics technology has evolved, the value of the insights that can be gleaned from a cross-sectional look into the industry is suddenly worth more than pharma’s closely guarded secret.

GlaxoSmithKline opened up its books to outside researchers in 2012. At the time, the pharmaceutical community was taken aback at the company’s forwardness and willingness to share its insights. Glaxo’s insights, in particular, are worth a lot: $65bn in research and development a year, and $43.6bn in sales in 2013. Since then, the pharma giant and six of its pals have uploaded the results of over 900 clinical trials onto Glaxo’s ClinicalStudyDataRequest.com, an initiative that has sprouted another dozen research projects using the data.

Nicolaus Henke, Director of McKinsey & Company, thinks there are three reasons for the trend to invest in big data in healthcare: “Availability – we have so much more captured machinery to build data available today, whereas we only had providers five or 10 years ago. The second reason is it’s much easier and cheaper to link this data; today, we can simply link data sets from multiple formats and sources, and make sense of them in a high quality way. And this is a relatively low cost computational effort. The third reason is the big imperative to understand population health better. The minute we understand everybody’s health better, that is when we will understand chronic disease better and predict who is going to get sick. This is very, very important for healthcare outcomes and economic reasons.”

Fiscal benefits
However, it is mainly fiscal benefits that are driving this revolution in medical research and analysis. Healthcare expenses now represent 17.6 percent of US GDP, and, according to McKinsey, $600bn more than the originally expected benchmark for a nation of that size. Insurance companies are eager to reduce payouts and have been turning to new models, such as entering into accords with doctors and pharmaceutical companies where positive outcomes from treatments are rewarded, and reimbursement is based on a drug or treatment’s ability to improve patient health. It has therefore become vital that information be shared between healthcare providers, clinicians and pharmaceutical companies.

According to McKinsey’s figures, the effective use of big data tools by the US healthcare industry could be worth in excess of $300bn each year, and potentially as much as $450bn. This would come primarily from reduced healthcare expenditure, “or 12 to 17 percent of the $2.6trn baseline in US healthcare costs”. Though these figures are applicable only if the widespread use of big data technology is adopted, McKinsey suggests even simple interventions can have a significant impact, too. “For instance, we estimate that aspirin use by those at risk of coronary heart disease, combined with early cholesterol screening and smoking cessation, could reduce the total cost of their care by more than $30bn,” wrote Basel Kayyali, David Knott, and Steve Van Kuiken in the report. “While these actions have been encouraged for some time, big data now enables faster identification of high-risk patients, more effective interventions, and closer monitoring.”

Clinically and in terms of care quality, there are significant gains to be made by sharing and analysing data communally. “Data-driven healthcare has become increasingly well-defined and understood over recent years,” says Riskin. “It is the concept that large record sets can assure that best treatment algorithms are applied and that treatment algorithms are customised for individual patients. It means that, although modern medicine treats the 83-year-old diabetic patient with hypertension similarly to the 45-year-old athlete with hypertension, based on them being grouped together in the same clinical trial, in the future, care will be personalised based on what worked best for millions of similar patients previously. This level of customised care offers the promise of better and more applicable care.”

Better patient outcomes
Though the benefits of investing in a more data-driven healthcare system in the US are many and varied, there are some caveats. Primarily, there is the issue of privacy and doctor-patient confidentiality. “Although new computer programs can readily remove names and other personal information from records being transported into large databases, stakeholders across the industry must be vigilant and watch for potential problems as more information becomes public,” explain Kayyali, Knott and Kuiken. Privacy is a key issue, not only for patient’s peace of mind, but also commercially: even though databases may be accessible to those within the healthcare industry, they will probably not be open to the public, and private medical records undeniably have great commercial value outside the industry. “Current federal law does not fully address the use of new technologies, despite the fact that social media, web tracking, and mobile devices allow for faster, cheaper and more detailed data collection and sharing among resellers and private-sector entities,” says the Health Insurance Portability and Accountability Act. But it remains unclear how data-driven healthcare services might fit into these directives.

For the big data revolution to have a positive effect on healthcare, the industry will need to look beyond itself and into other sectors that have already taken the data-leap. “All too often, players have taken advantage of data transparency by pursuing objectives that create value only for themselves, and this could also occur in the healthcare sector,” say the McKinsey experts. But overall, the potential health and care quality benefits are far too great, and the industry must band together to ensure they reverberate throughout the sector.