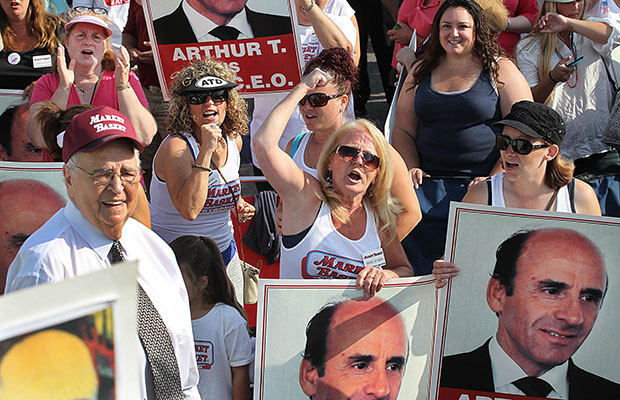 Employees and customers hold a rally in support of Arthur T. Demoulas after he was ousted from his role at Market Basket by a board controlled by his cousin, Arthur S. Demoulas. Arthur T. was reinstated as CEO in August after striking a deal to buy 50.5% of shares from rival family members

The media couldn’t get enough of the confrontation between employees of the New England supermarket chain, Market Basket and its management. On the surface it has all the hallmarks of a classic tale of good vs. evil. The beloved Arthur T. Demoulas, with the support of his staff able to summon the strength necessary to return as their leader after being ousted by his cousin and rival, Arthur S.

But there is a more compelling message to be gleaned from the Market Basket story. It acts as an allegory, offering insights into tackling the issue of US workers feeling increasingly marginalised in a country where the minimum wage debate is reaching fever pitch. In this context, the story offers solutions that must be acknowledged by government officials and business leaders alike, because if something is not done to tackle the widening inequality gap, the US might see the American dream become nothing more than a distant memory, leaving huge swathes of its population feeling forgotten and disillusioned.

It acts as an allegory, offering insights into tackling the issue of US workers feeling increasingly marginalised

Market Basket CEO, Arthur T. Demoulas, said in an interview with the Boston Globe: “If everyone in the workplace is equal and treated with dignity, they work with a little extra passion, a little extra dedication.” This sentence really sums up why Arthur T. was successful in maintaining his position at the top and why his employees were willing to put their jobs on the line to help put him there. Market Basket’s success is owed to its ability to breed a coherent company culture that resonates with its workers, and Arthur T. embodies that ethos.

Louis Gerstner, former chairman and CEO at IBM famously remarked that strategy was unimportant, but culture is everything, and he may be right. In the retail industry culture is king and the ‘Tale of the Two Arthurs’ is a reminder of that fact. “We have gotten a little sloppy in the US, in that for a number of years there was relatively high-unemployment, so it seemed like it was pretty easy to replace people if you wanted to, but people overlook how much skill is involved in retailing,” explains John Rand, Senior Vice President at Kantar Retail. “It is a skill. It takes time to learn it and if you want to do it well you have to hold onto those people.”

Arthur T. knew this and it is why he is a strong advocate of profit sharing plans. Other leaders should be too, as statistically companies that incorporate such incentives into their culture grow faster, do better and outperform those that don’t. “If you feel like you have ownership in the company then you do a better job,” adds Rand. “That means that as a stockholder, Arthur T. was willing to give up some small percentage of his revenue and give it back to employees; creating a strong culture of performance in the process.”

The US is a country whose conservative values have blocked it from taking pragmatic action, but with rising inequality threatening the stability of its economy, the time for change is now. Hilary Clinton recently said that trickle-down economics had “failed rather spectacularly”. The US desperately needs a means of propping up its ailing middle-class, but so far proposed solutions have been marred, being labelled as socialist. Hopefully the Market Basket story can provide answers to the country’s problems, without offending its conservative sensibilities.