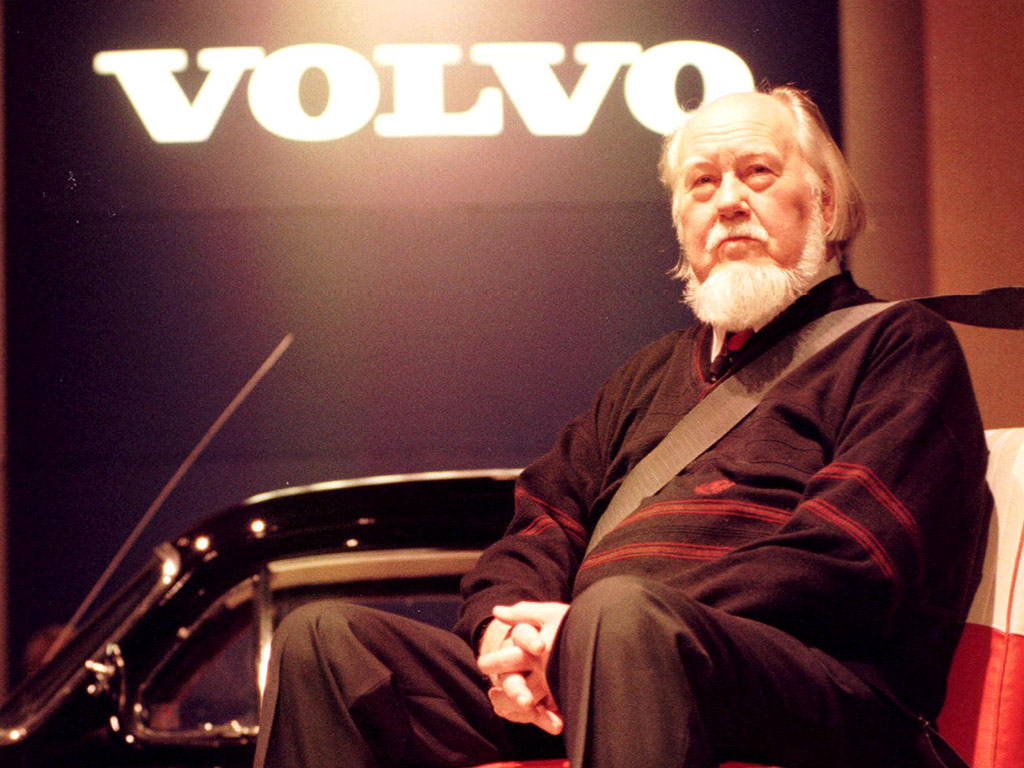 Inventor of the three-point safety belt, the late Nils Bohlin, came up with the design for Volvo in 1959

Towards the middle of the last century, advances in automotive engineering meant cars were being produced with faster engines and becoming more accessible to the masses. The potential for death or serious injury increased as the roads became ever busier with ever-faster vehicles. Few people may be aware of who Nils Bohlin was, but anyone who has sat in a car since the early 1960s will have used his most famous innovation, widely believed to be one of the most important inventions of late modernity: the three-point seatbelt.

The simple yet innovative device – taken for granted by most and perhaps used only for fear of fines by many – is estimated to have saved over one million lives since it was introduced. The three-point seatbelt has been referred to by the German patent registrar as one of the eight most important patents to have benefited humanity from 1885 to 1985. American automobile manufacturers such as Ford and Nash had been offering an optional, basic safety belt since as early as the mid-1940s, but, due to a lack of public interest, they were not made standard. When violent accidents happened, the strap around the waist would often cause serious internal abdominal injury as well as head injuries from the wearer being thrown forwards. The basic diagonal belt was better than no safety belt, but an improvement was desperately needed.

Lives saved by the three-point seatbelt

Reduction in injuries due to the seatbelt

Year Bohlin was inducted into the Inventors Hall of Fame

Getting them out, keeping them in
Born in Härnösand, Sweden on July 17 1920, Bohlin gained a BSc in Mechanical Engineering, graduating in 1939. He went on to work for Svenska Aeroplan Aktiebolaget (SAAB) in 1942. While he was at SAAB, he worked on various safety features for its aeroplanes: there is a patent crediting him as the inventor of the rocket-launched ejection seat. He also designed and patented a safety harness described as a “device to protect an occupant against bodily injury during emergency escape from an aircraft”. Without such a harness, the explosive force below the seat during an ejection would have severely injured the pilot.

After establishing himself as an expert in aeronautical safety engineering, Bohlin was recruited by the head of Volvo, Gunnar Engellau, to become a Volvo safety engineer in Gothenburg. Engellau is said to have lost a relative in a car accident due to the failure of a diagonal waist belt. He therefore presented Bohlin with the task of producing something better and safer. After a year, Bohlin developed the modern three-point seatbelt and Volvo introduced the design in its cars.

It might be worth noting that Bohlin doesn’t necessarily deserve all the credit for coming up with the idea for a safety belt that covers the shoulder and waist. In 1951, when Bohlin was still at SAAB, US Patent No 2,710,649 was submitted by Roger W Griswold and Hugh DeHaven for a “combination shoulder and lap safety belt”. This became known as the ‘CIR-Griswold restraint’. The patent application described it as being suitable for various situations where restraint of the human body was required. The safety belt was also intended for use in vehicles where occupants risked being thrown from their seats.

Bohlin improved on this concept and came up with a more effective version that could be pulled across the chest and waist with one hand in one swift movement. He said: “I realised that both the upper torso and the lower part of the body had to be held securely in place, with one belt across the chest and another across the hips.” This would distribute the force of the impact evenly.

Taking it to market
Bohlin’s engineering background and his experience working with high-velocity mechanics meant he had developed an astute understanding of the laws of motion. Designing a safer car interior for the commercial market was challenging because whatever was designed would need to be easily utilised by anyone capable of driving. “It needed a non-moving attachment point for the buckle, placed far down beside the occupant’s hip so that the belt is pulled taut across the body throughout the collision sequence. It was a matter of finding a solution that was both simple and efficient,” said Bohlin.

The effectiveness of the three-point design was analysed in a research project carried out by Bohlin: A Statistical Analysis of 28,000 Accident Cases with Emphasis on Occupant Restraint Value. Of the unbelted and belted front-seat occupants, it was found that “the average injury-reducing effect of the harness proved to vary between 0 and 90 percent, depending on the speed at which the accident occurred or the type of injury”. The report concluded: “Unbelted occupants sustained fatal injuries throughout the whole speed scale, whereas none of the belted occupants was fatally injured at accident speeds below 60mph.”

But the industry and the public didn’t initially accept the seatbelt. Rumours spread that, with the belt so close to the neck, there was a danger of decapitation in the event of a crash. Thomas Broberg, a senior technical advisor at the Volvo Cars Safety Centre, explains: “They did a world tour demonstrating it – they did stunts. They did all these tests, showed all this data, but it took a number of years before the general public and also the different governments around the world were persuaded that this was really a good technology and this is something that we should enforce, which happened during the 70s and 80s.”

Once the effectiveness of the design had been proven, a patent application was submitted and US Patent Number 3,043,625 was granted to Volvo crediting Bohlin as the inventor. The first cars to have the belt installed were the Volvo Amazon and PV544: also the first cars in the world to have safety belts installed as a standard feature. Volvo was so confident about the importance of the three-point design it made the patent available to all other car manufacturers in a benevolent act of magnanimity.

After designing and implementing the three-point seatbelt, Bohlin went on to invent the Side Impact Protection System for Volvo. The patent was issued to Bohlin and Goran Carnbring for “side-collision protection in automotive vehicles”. He also designed and patented the buckle used in the three-point seatbelt. After he retired as Head of Safety at Volvo in 1985, he continued to act as a safety consultant.

False sense of security
Iain Knight, Crash and Safety Research Manager at Thatcham Research, emphasises the significance of the three-point seatbelt: “Vehicles are now safer than they have ever been, with manufacturers having made fantastic improvements through the strengthening of the occupant safety cell and the addition of an array of air bags. However, all of this protective technology is designed around a belted occupant, such that there is no doubting the role of the seatbelt as the single most important factor to date in reducing the risk of death and serious injury for motorists.”

The advantages of wearing a seatbelt in an accident are obvious, but several academics have argued that wearing seatbelts actually makes people drive faster, causing a greater number of pedestrian and cyclist injuries and fatalities. The study of ‘risk compensation’ suggests seatbelts give drivers a false sense of security. Researcher John Adams of University College London says: “Reiterated publicity for the life-saving effect of seat belt laws helps to explain why they don’t save lives. The risk compensation effect works through perception. If you perceive that something will make you safer, you will modify your behaviour.”

In spite of the risk compensation arguments, Bohlin’s contribution to engineering won him various awards in Europe and the US. He was inducted into the Health and Safety Hall of Fame in 1989, the Automotive Hall of Fame in 1999 as well as the Inventors Hall of Fame in 2002. The list of awards and the various patents issued to Bohlin during his career tell a story of a man who contributed a great deal towards modern vehicle safety – even if those contributions are taken for granted by most. So, next time you get into your car and comfortably and effortlessly clip your seatbelt into place, remember your debt of gratitude to this accomplished Swedish engineer.