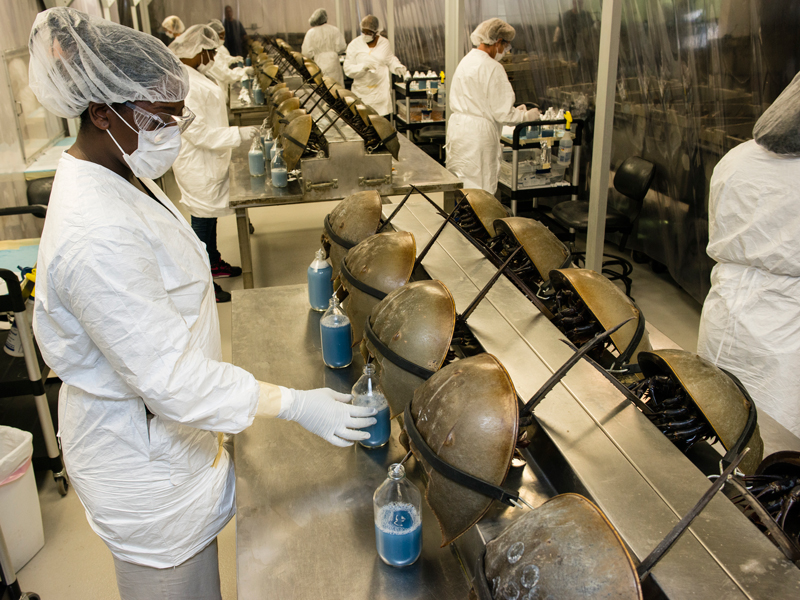 The blood of the horseshoe crab is one of the most valuable liquids on Earth, changing hands for thousands of dollars per litre

There are many noteworthy things about horseshoe crabs. First, they are not actually crabs at all – a recent study confirmed a long-held scientific belief that they are in fact arachnids, more closely related to spiders and scorpions than any crustacean. More interesting still is the fact that the blood of the horseshoe crab is one of the most valuable liquids on Earth, changing hands for thousands of dollars per litre.

The crab’s blood – which, it should also be noted, is blue in colour – plays an essential role in the medical profession, enabling scientists to identify bacterial contamination. Every medical device that enters the human body, from implants to injections, is first checked for toxins using the blood of these strange, helmet-shaped sea creatures.

The fact that horseshoe crabs have inhabited the planet’s oceans for more than 450 million years has seen them termed ‘living fossils’. They have survived multiple mass extinction events and outlived the dinosaurs. But now, their time may be coming to an end. In 2016, the International Union for Conservation of Nature added the Atlantic horseshoe crab to its ‘vulnerable’ list in response to falling numbers.

Overharvesting is certainly not helping the plight of the horseshoe crab, nor the many other coastal species that rely on them as a food source. Perhaps just as worryingly, the species decline is prompting the biomedical industry to question whether it will be able to continue protecting individuals from contamination in the future.

Quite the catch
While three extant species of horseshoe crab are found in Asia, much of the biomedical demand is currently met by Limulus polyphemus, the Atlantic horseshoe crab found on the east coast of the US. Every year, thousands of these crabs are caught by the pharmaceutical industry and shipped to a laboratory. A drain is then inserted close to the heart and around 30 percent of the animal’s blood is syphoned off. It’s a process that (most of) the crabs survive, but a distressing one nonetheless. As a result, the Atlantic States Marine Fisheries Commission (ASMFC) closely monitors their collection.

Horseshoe crabs have survived multiple mass extinction events and outlived the dinosaurs, but now their time may be coming to an end

“From 2004 to 2017 along the US Atlantic coast, an average of approximately 417,700 crabs were harvested and bled annually by the biomedical industry,” ASMFC staff told The New Economy. “A few crabs do die at the facility and are reported to the ASMFC. After crabs are bled, they are returned alive to the water and the ASMFC applies a 15 percent mortality rate to those and adds them to those that died during the collection and time at the facility. Therefore, the ASMFC believes that on average, from 2004 and 2017, approximately 61,500 horseshoe crabs died annually from biomedical practices along the Atlantic coast of the US.”

For a long time, the loss of a few thousand horseshoe crabs was viewed as a necessary price to pay for the huge medical benefits derived from their capture. Blood cells taken from horseshoe crabs are used to make Limulus amebocyte lysate (LAL), a substance that produces an instantaneous and clearly visible reaction to contaminants. Without LAL, anyone receiving an injection, medical implant or intravenous drip would be at risk of a potentially lethal bacterial infection.

Shell shocked
Concerns over the long-term health of horseshoe crab populations off the US East Coast have caused some to question whether their current use should be reconsidered. Although mortality rates remain low, there is growing evidence that even when the crabs survive, the blood harvesting process has detrimental effects.

“There are limited studies that address the sub-lethal effects of biomedical bleeding,” ASMFC staff noted, citing research by Rebecca Anderson and Meghan Owings. “These studies both had relatively low sample sizes and were not conducted at or with biomedical facilities, but the studies indicated that bleeding may affect activity levels, immune function and mating frequency. Preliminary data collected from horseshoe crabs that have been bled, tagged, released and recaptured at a later time indicate that survival on a long-term basis is not very different from unbled crabs, but analysis of this data is ongoing.”

crabs are harvested from the US Atlantic coast annually

crabs die annually as a result

A 2014 study by researchers at the University of New Hampshire and Plymouth State University found that the bleeding process results in lower activity levels and a decreased expression of tidal rhythms. While it is true that further study is required, the data available does suggest the horseshoe crabs that survive bleeding are left disorientated and weak, potentially affecting the ability of female crabs to spawn. Further research has found that the mortality rate of horseshoe crabs post-bleeding is only eight percent for males, but as high as 30 percent for females.

Even if it is difficult to conjure up empathy for a creature that looks like something from the Alien film series, reasons remain to care about the plight of the horseshoe crab. The species is an important source of food for many other coastal animals and its falling numbers could have a far-reaching impact on other populations. The number of red knot birds, for example, has plummeted across the East Coast in tandem with horseshoe crab numbers.

“Horseshoe crabs play an ecological role throughout their range as part of the marine food web and as a substrate for barnacles and limpets,” explained ASMFC staff. “They are consumed by other crabs, fish, conchs, sharks and sea turtles, including the endangered loggerhead, in different stages of their life cycle, and they consume many species as well.”

Climate change, habitat destruction and commercial fisheries are all putting pressure on horseshoe crab numbers, in addition to demand from the biomedical industry. While it is true that the LAL test is an essential asset to the medical community, this fact should not serve as a reason to ignore the effects that crab harvesting is having on the species and the wider coastal environment.

Put to the test
The biomedical industry is facing a dilemma. Although the three Asian species of horseshoe crabs could be used for blood, this simply pushes population pressures elsewhere, while still raising the same ethical questions. A synthetic alternative to the LAL test offers hope, but progress on this front has been slow. Dr Ling Ding and Dr Bow Ho of the National University of Singapore developed recombinant Factor C (rFC) to replace the LAL test back in 1997. Since then, despite numerous studies showing that rFC is at least as effective as LAL, if not more so, adoption has been limited.

However, a recent patent protection expiry regarding rFC offers hope that more commercial pharmaceutical companies will begin manufacturing it. As is so often the case, an economic incentive may provide the horseshoe crab’s most likely route to salvation. With around 70 million LAL tests performed every year, a man-made alternative offers a potentially lucrative opportunity for pharmaceutical manufacturers.

Still, a synthetic LAL substitute may not be enough to save the species. In addition, more emphasis must be placed on cleaning up coastal ecosystems and enforcing tighter restrictions on the animal’s use as bait. The close relationship between biomedical firms and regulatory bodies also creates a concerning conflict of interest that should be investigated further.

The creation of protected areas has resulted in local horseshoe crab populations recovering somewhat in recent years, and this approach should be rolled out on a much larger scale. Over the past three decades or so that the LAL test has been in use, horseshoe crabs have saved the lives of countless humans. It’s about time we returned the favour.