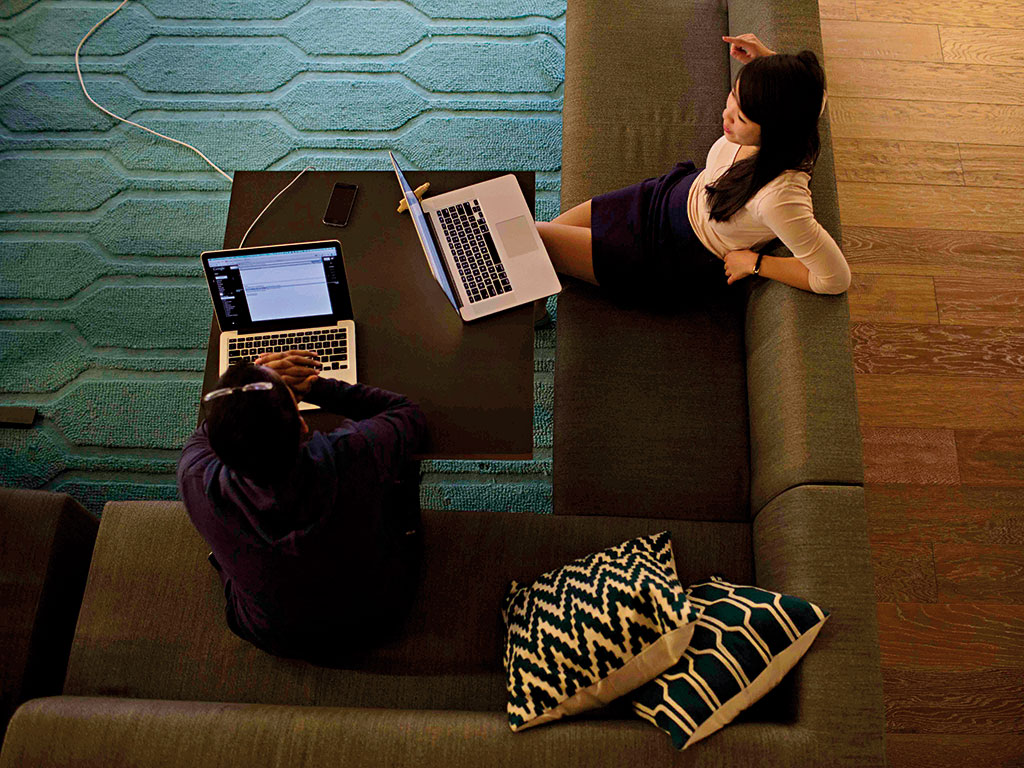 Employees relax at the offices of online payments firm Stripe, which recently partnered with Visa

Arguably no other area has had more of an impact on financial services than technology, and much has been said about the role of fintech firms in bringing the industry kicking and screaming into the digital age. More than a mere buzzword, ‘fintech’ encapsulates that which has reshaped financial services over the years, and key innovations have forced leading financial powers to overhaul their operating models and reconfigure their strategies.

Writing in the report The Rise of Fintech in Finance, Kantox’s CEO, Philippe Gelis, said: “Fintech is changing the finance sector just like the internet changed the written press and the music industries. In what is a stagnant sector monopolised by banks, finance is ripe for innovation and fintech is unquestionably the catalyst needed for change.”

Major banks and brokers no longer enjoy the monopoly over traditional revenue streams they once did, and the technology-first mind-set adopted by fintech firms has succeeded both in lowering costs and levelling the playing field. Having done much to advance the industry’s cause, fintech has captured the imagination of the investment community, and Accenture figures show investment in the sector last year was three times greater than the year before, at $12.2bn.

By plugging into the fast-evolving fintech ecosystem, major banks and insurers have been able to adapt more quickly to the changes sweeping financial services, and path breaking technological advances mean many have been able to cut costs and boost compliance. Despite being both a threat and an opportunity, the fintech revolution has done little to unseat the powers that be, though its significance in bringing disruptive ideas to the table can scarcely be ignored.

Here The New Economy takes a look at some of the biggest names in the business and their impact on financial services.

Five years on from its formation, the San Francisco-based online payments firm Stripe announced it was entering a partnership with the world’s leading credit card company Visa. In doing so, Stripe raised its market cap to $5bn. Already in cahoots with Apple, Facebook and Twitter, the startup has made a habit of forming famous friendships, and has so far equipped each of its partners with the tools to manage and process online payments.

Stripe is confident its infrastructure is the surest way to accept payments online. Its stated ambition is to expand internet commerce by making online transactions more manageable.

The integration of social media and e-commerce has given those at the company reason to feel optimistic, and so too has Apple’s decision to work alongside it and a handful of partners for the launch of Apple Pay. The emergence of the ‘buy button’ on social media means Stripe is uniquely positioned to capitalise on the changing payments landscape, and its leading role in facilitating social media’s foray into e-commerce looks assured.

The London-based startup pulls together data from thousands of sources so users can more easily contextualise and digest private company information. Short for ‘due diligence’, DueDil is little over four years old but already counts KPMG, Unilever and Dell among its users.

Created as a means of providing due diligence before a takeover deal goes through, the platform has since come to be seen as an effective means of finding new customers. According to the site: “DueDil Advanced Search enhances every step of the B2B lead generation process, because we believe we should be accountable for your numbers, just like someone on your team.”

A DueDil survey of 6,000 professionals says finding new customers was the biggest ongoing challenge of 2015, and the company’s Advanced Search function allows users to employ upwards of 40 filters to segment leads and find the right client.

DueDil’s ambition is to do for private companies what Bloomberg has done for public ones, and comparisons between the two are common. The similarities do not stop there, however; the appointment of Lex Fenwick, former CEO of Dow Jones and Bloomberg, to the board suggests DueDil will likely tread much the same path as his former employer.

The Atlanta-based startup this year posted a three-year growth rate of more than 6,700 percent and in doing so underlined its status as one of the fastest growing companies in the fintech sector. Kabbage “puts the power of business back in your hands by giving you instant access to funds”, according to its site.

Little over four years on from issuing its first loan, the company has handed out $1bn in capital and come to be seen as a leading provider of small business finance in both the UK and US. Kabbage has extended a welcome lifeline to a growing number of small businesses without the requisite revenue or legal structure to qualify for a traditional loan.

Small businesses can qualify for loans ranging from £1,000 to £40,000 simply by signing into their eBay and PayPal accounts, and allowing Kabbage to review and approve past transactions in real time. By employing more intelligent methods to determine whether businesses are eligible for a loan, funding has become much less of an issue.

Having set in stone a series of new partnerships and product upgrades, Tipalti this year extended its support to an additional 58 countries and underlined its status as the world’s leading partner payments automation platform.

Rarely is there a simple, common denominator when it comes to making payments around the globe, and the ability to streamline the payments management process means users can easily improve their efficiency and regulatory compliance. The firm automates and streamlines payments for more than 300,000 payees and processes more than $1.5bn on an annual basis.

A study conducted by Tipalti recently pinpointed the operational failures concerning affiliate payment and communication processes, and showed that almost 41 percent of respondents had stopped working with an affiliate network due to payment issues. What’s more, 65 percent of the remaining sample said they would do much the same if confronted with consistent payment problems.

The report serves as a reminder that proper and timely payment is crucial in maintaining a healthy working relationship, and 99.5 percent of the 250-partner sample agreed with the opinion that the issue was an important one.

Arguably the best-known fintech firm of the moment, TransferWise was founded in 2011 by Taavet Hinrikus and Kristo Käärmann to bring a greater measure of transparency to the small matter of sending money abroad. Recognised by the World Economic Forum earlier this year as one of the world’s most innovative companies, TransferWise allows users to avoid banking fees and make savings of up to 90 percent on their transfers.

Whereas banks often charge five percent in hidden fees, TransferWise charges only 0.5 percent, and for a more efficient service at that. Richard Branson spotted the startup’s potential and, last year, invested $25m in the so-called “anti-bank” and its “mission to make the world of money transfers a fairer place” for both individuals and businesses.

Infrequent users stand to save a sizeable percentage on any transfers they make, though the biggest beneficiaries by far are businesses that regularly transfer money overseas. Some have even gone so far as to suggest foreign exchange between banks could soon become a thing of the past.