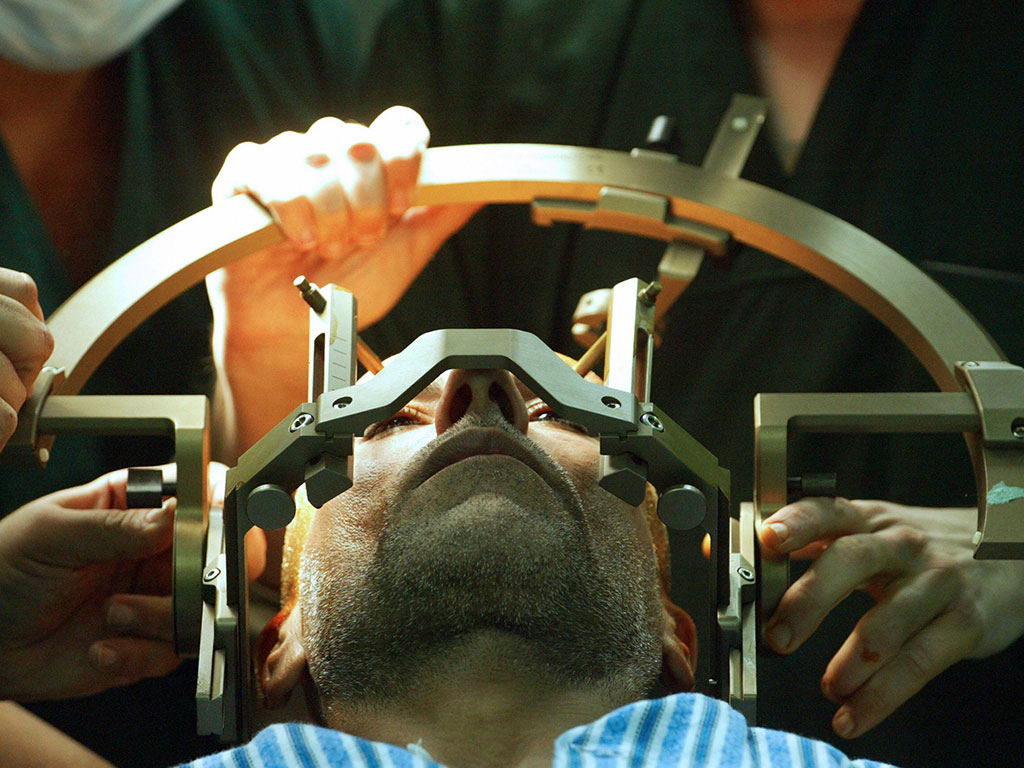 A patient is prepared for brain surgery. Deep brain stimulation was discovered by French neurosurgeon Alim-Louis Benabid in 1987

There are some conditions for which medication simply cannot relieve the debilitating symptoms. But when all other avenues have been exhausted, patients suffering from extreme cases of Parkinson’s disease and obsessive compulsive disorder (OCD) now have a glimmer of hope: deep brain stimulation (DBS). This highly intrusive and risky procedure involves drilling into the brain to connect electrodes, which send signals that can drastically alleviate symptoms.

The treatment involves a two-step surgical procedure. In the first operation, two small holes are drilled through the top of the skull in order to channel electrodes that travel seven centimetres into the brain’s grey matter. The second surgery involves the implantation of a battery device into the chest or the abdomen, which is connected to a wire that runs up into the skull and onto the electrodes. When switched on, the device emits electrical currents that stimulate the information-carrying areas of the brain and can override rhythmic oscillations that have gone awry.

Parkinson’s disease
DBS was first used by Alim-Louis Benabid, a French professor of neurosurgery, who made the fortunate discovery in 1987. For decades, lesion therapy had been used as a last resort for Parkinson’s and severe tremors. This procedure involved making small lesions to the affected area of the brain that could result in symptom alleviation. During one such procedure, Benabid inserted an electrical probe into the area he intended to operate on – a common precaution that ensured the correct spot had been identified. As expected, when stimulating the area with slow pulses, the shaking worsened, but, to his surprise, Benabid found that, when speeding the pulses up, the patient’s hand stopped shaking for the first time in years. Instead of making a laceration as planned, he instead attached the world’s first DBS lead.

DBS has since become an FDA-approved treatment for uncontrollable tremors, Parkinson’s and, more recently, OCD. “DBS in Parkinson’s disease is applied to a tiny region of the brain, usually the [subthalamic nucleus or globus pallidus interna], and despite the small amount of current that is used, DBS precipitates an important change in a larger neural network”, said Dr Michael S Okun, Neurologist at UF Health, National Medical Director at the National Parkinson Foundation and author of 10 Breakthrough Therapies for Parkinson’s Disease. “This network-wide change can, in some patients, lead to dramatic changes in a Parkinson’s disease patient’s symptoms. Next to dopamine replacement therapy, DBS as a therapy has had the most meaningful effect on Parkinson’s disease patients worldwide. It has led to control of tremors, suppression of dyskinesias, and reductions in their ‘off’ medication time.”

Future potential
Despite the phenomenal success witnessed in some patients, the chances of a miraculous reaction to DBS are still only 50 percent. Moreover, while trials are now being carried out on major depression, with more to follow on conditions such as schizophrenia and anxiety disorders, there is still a great deal of research to be done in order to painstakingly map the complex connections in the brain that vary from disorder to disorder, and even from patient to patient.

Until now, it has been almost impossible to record these constellations, as the data was only accessible when the brain was exposed during surgery. But that is about to change. “The next generation of DBS devices will be smaller, smarter and sleeker, and the therapy will be directed at a much broader range of neuropsychiatric diseases”, Dr Okun told The New Economy. Thus the new, more complex DBS will enable a real-time, ongoing, long-term look into the neurological pathways that occur in an array of mental afflictions. Furthermore, doctors will be able to tailor stimulation configurations to the individual and even make adjustments if new patterns emerge.

It is a very exciting time in the field, which is receiving a great deal of state support from both sides of the Atlantic. President Obama’s five-year White House Brain Initiative is investing $30m into research for advanced neurotechnologies in order to revolutionise our understanding of the human brain, while the EU’s €1bn Human Brain Project has over 100 institutions participating in a similar initiative. There is a real push from leading scientists, hospitals, academic institutions and governments to finally identify the neuro-transmitting patterns that cause various neuropsychiatric disorders. With this knowledge, together with innovative developments in DBS, effective and lasting treatment could drastically improve millions of lives.