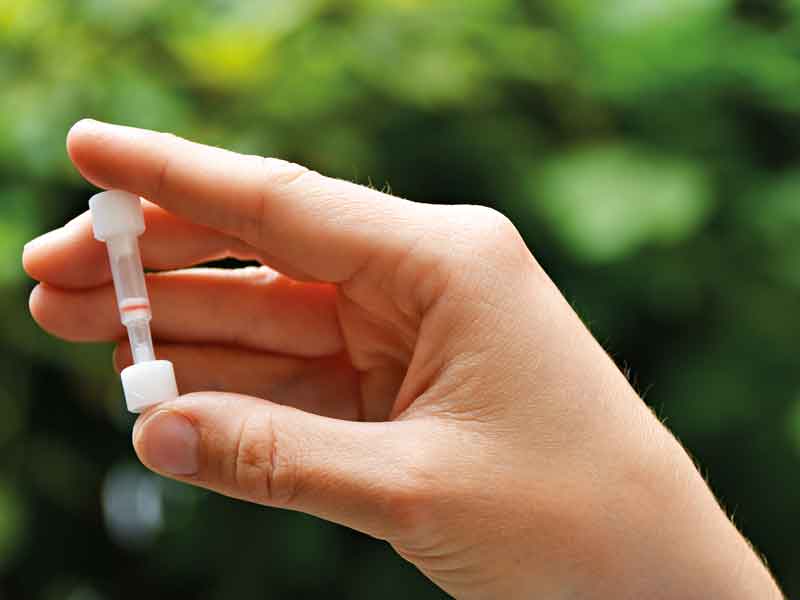 Most cyanide detection methods are cumbersome and often require the use of hazardous chemicals. CyanoGuard offers an environmentally friendly alternative

In March, a cyanide spill at the Veladero mine in Argentina marked the third such incident in the past 24 months. The first spill, which occurred in September 2015, witnessed at least one million litres of a highly toxic, cyanide-containing solution released into the local ecosystem.

Unfortunately, these are not isolated cases: a recent study by the NGO Earthworks found that a staggering 93 percent of all gold mines currently operating in the US have been involved in similar incidents, with 74 percent polluting local water sources as a result. Without a doubt, cyanide poses a serious threat to local workers, communities and ecosystems.

Cyanide is regarded by many as one of the major cost drivers in gold extraction, accounting for as much as 25 percent of the operating costs in some cases. Until today, no environmentally friendly alternative has managed to displace its necessity, which continues to increase at a growing rate due to the diminishing quality of many ore deposits.

Considering how little the cyanide detection landscape had changed in recent decades, it was obvious the technology needed to be taken out of the lab

The detection of cyanide is key to preventing environmental disasters similar to those that struck Veladero. However, most standard cyanide detection methods are cumbersome and, paradoxically enough, often require the use of hazardous chemicals.

Finding a solution
Inspired by the lack of suitable and sustainable alternatives, I founded CyanoGuard in 2016. While studying as a chemistry student at the University of Zurich, I came across a groundbreaking technology that would enable cyanide to be detected in solution with the naked eye.

Considering how little the cyanide detection landscape had changed in recent decades, it was obvious the technology needed to be taken out of the lab and put into the hands of those who needed it most.

A focus on mining was a natural choice: while mining activities notoriously leave enormous ecological footprints on the environment, they also play an important role in the production of everyday products we often take for granted. For example, without the regular extraction of metals there would be no smartphones, communication wires, specialised medical equipment or high-end beauty products.

Premium added to the price of gold by cyanide

According to estimates from the World Bank, our ongoing transition to green energy technologies will only heighten this demand for minerals and metals. Therefore, mining companies are under enormous pressure to improve their economic performance, develop more sustainable practices and minimise their impact on the environment.

Acid test
At CyanoGuard, we believe mining companies must change the way they address cyanide detection if they are to meet the growing demand for metals. As such, we have developed a cyanide test that changes colour (from orange to violet) when free cyanide binds to a corrin-based indicator.

It works like a pregnancy test, showing the user within seconds whether the free cyanide concentration of a sample is above or below a certain threshold.

We are not shy about the fact we have developed the world’s fastest and safest cyanide detection kit, but what’s more important is that the technology allows everyone to test aqueous samples in any setting, at any moment and without the use of hazardous substances or specialised equipment and training.

In 2012, the Mining Association of Canada released a list of the top 100 innovations in the mining industry. Surprisingly, only one of the innovations named on the list was directly related to cyanide management. We found this fascinating, especially considering how much shareholder value a cyanide spill can erode within just days.

This new technology will help mining companies reduce operational costs, safeguard local ecosystems and protect their public image. Here at CyanoGuard, we refer to this as the ‘mining as if there is a tomorrow’ approach: the key methodology ensuring sustainable industrial and artisanal mining practices, as well as economic prosperity.

My team also believes in the endless potential of the technology, and foresees it playing an important role in the industry’s ongoing digital transformation.

But we plan to extend our operations beyond just the mining industry, tackling issues relating to cyanide detection in healthcare and food processing as well.

The platform is also set to extend to other pollutants, with the stated aim of simplifying analytical procedures that are currently only possible in laboratory settings.

Ultimately, CyanoGuard hopes to protect communities and the wider ecosystem by placing professional detection kits in everyone’s pockets – a proposition truly worth its weight in gold.