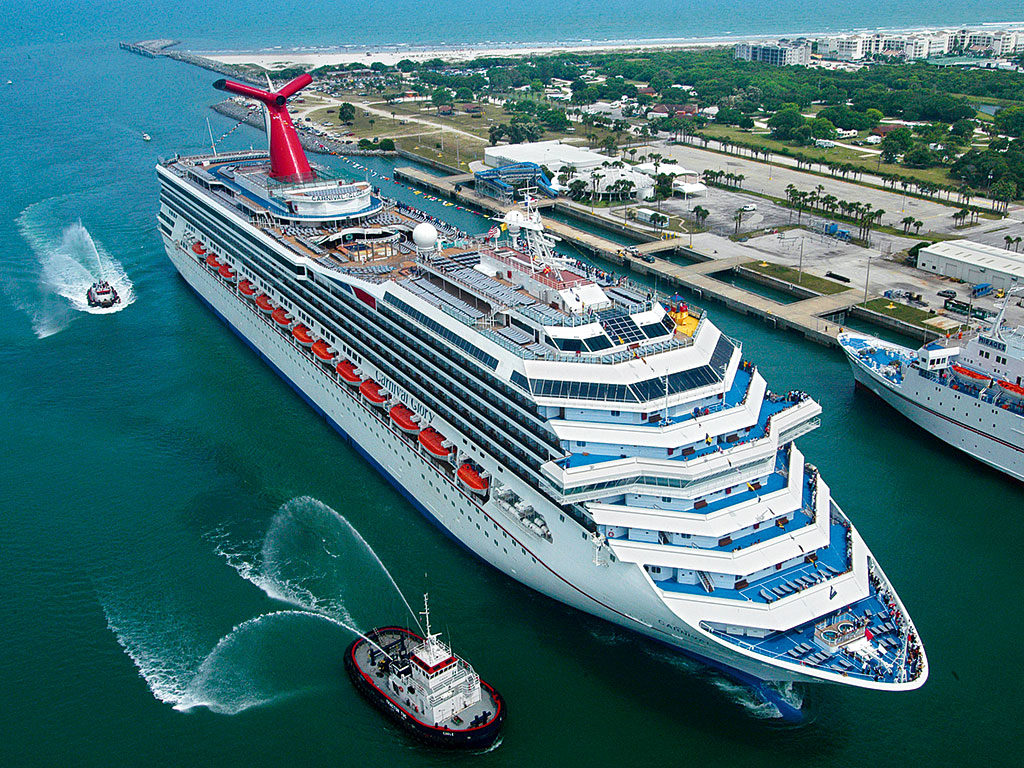 Carnival Corporation, the largest cruise line in the world, with 10 brands, is making major strides in its environmental and sustainability policies and practices. Last year, Carnival announced its plans to develop and deploy new exhaust gas cleaning systems, called ‘scrubbers’, across its fleet over the next several years, following successful trials of the technology. Carnival has committed over $180m to implement this new exhaust cleaning technology on vessels from Carnival Cruise Lines, Holland America Line, Princess Cruises and Cunard.

The US Environmental Protection Agency (EPA) and Coast Guard announced it had reached an agreement in principle with Carnival to develop this advanced new emission-control technology, to be used in waters around the US coasts. Under the agreement, the cruise line will develop and deploy the system on up to 32 ships over the next three years, to be used in Emission Control Areas (ECAs). The North American and US Caribbean ECAs create a buffer zone around the US and Canadian coasts where ships must reduce harmful emissions.

“This is a significant accomplishment as well as an important milestone for our company,” said Carnival Corporation CEO Arnold Donald. “Working together with the EPA, US Coast Guard and Transport Canada, we have developed a breakthrough solution for cleaner air that will set a new course in environmental protection for years to come.” Carnival has been a partner in the development of this technology and will take the lead in refining both design and installation aspects on ships with a variety of engine configurations between now and mid-2016.

The new controls combine sulphur oxide (SOx) scrubbers with diesel particulate filters – thus combining technologies well known in the power plant and automotive sectors, but not previously used together on a marine vessel. For the first time, this combination is being developed to accommodate the restricted space on existing ships.

Flexibility in the standard
The technological advances spurred by these programmes will provide an opportunity for ECA compliance at a significant (50 percent or greater) reduction in cost, and may yield emission reductions beyond those required by current requirements. The advanced technology can also provide additional benefits in the reduction of particulate matter and black carbon.

The implementation also produces an immediate and significant public health benefit, as all the ships that have the scrubber technology installed will use either low-sulphur marine gas oil or shore power when in ports in the US and Canada. Ships that use shore power turn off their diesel engines and connect to local electric utility power.

Carnival Corporation is the most recent of several shipping companies, including other cruise lines, that plan to use flexibility in the standard to support the development of advanced pollution control technology. EPA supports the initiative taken by Carnival and other marine shipping companies to develop advanced emissions control technologies, including SOx scrubbers and the use of liquefied natural gas (which is also being developed as a technology to comply with the ECA standards).

In the next three years, Carnival’s scrubber purchases will either be retrofitted on ships or installed on new builds. One vessel already received a scrubber in 2013. The scrubber installation schedule for the remaining vessels is eight ships in 2014, 16 ships in 2015 and seven ships in 2016.

Increasingly, the cruise line industry is showing interest in scrubber technology. One motivating factor for scrubber purchase is the significant time spent in ECAs, which shortens the payback period.

Other cruise lines, such as Norwegian Cruise Lines and Royal Caribbean Lines, have also purchased scrubbers, but on a much smaller scale than Carnival.

Corporation-wide sustainability goals
One of the company’s major environmental performance indicators is the reduction of greenhouse gas (GHG) emissions. Shipboard fuel consumption, for example, is the largest contributor to Carnival’s carbon footprint. The company therefore set an overall corporate target of a 20 percent reduction from its 2005 baseline in the intensity of GHG emissions from shipboard operations by 2015 (as measured in grams of CO2 per ALB-km).

From 2005 to 2012, for instance, Carnival reduced its emission rate by 16.7 percent, which included a 3.0 percent decrease from 2011 to 2012. In order to meet its target, Carnival has set a goal to reduce its GHG emission rate by approximately 3.8 percent from 2013 levels by 2015, requiring an average annual reduction rate of approximately 1.3 percent.

To achieve its goals, Carnival continues to work on practical and feasible energy reduction and conservation initiatives. Each of its 10 cruise lines set annual energy consumption reduction objectives and targets (ranging from 0.25 percent to 2.5 percent) in accordance with their respective ISO 14001 Environmental Management Systems.

Voluntary initiatives
“We manage our energy-saving efforts through a corporate-level working group, whose goal is to identify both current and long-term fuel-saving opportunities,” says Carnival Corporation Vice President Jim Van Langen, who oversees the company’s sustainability efforts. “We are investing in many voluntary energy reduction initiatives that go considerably beyond the requirements of current laws and regulations.

“Such shipboard energy-saving efforts require multimillion-dollar investments for the company and a multipronged strategy that includes structure and design, systems and equipment, maintenance, and process efficiency, among others. We are also increasing use of vessel shore power installations and designing more fuel-efficient itineraries.”

In addition, the company has installed advanced waste-water treatment plants on 48 of its ships – close to 50 percent of its fleet and possibly more than any other cruise line. It has plans to install more of these advanced systems in new ship builds, as well as upgrading existing ship systems as part of its long-term strategy. Carnival is also investigating other emerging technology solutions and options that are already being used in land-based systems (similar to those the company recently designed for land-based scrubbers).

Carnival has also made it corporate policy to never discharge any untreated sewage, even though maritime law allows it in specific instances. Treated sewage discharges only take place when the ship is at a distance of more than 12 nautical miles. from the nearest land and when the ship is travelling at a speed of no less than six knots. Carnival is also driving company-wide efforts to install new LED lighting systems on cruise ships and reworking itineraries so it can reduce engine speed – providing environmental as well as economic benefits.

Investing in the environment
AIDA Cruises is once again setting environmental protection standards with its upcoming generation of ships, which will be put into service in 2015 and 2016. The new ships will feature a comprehensive filter system to reduce emissions.

AIDA President Michael Ungerer says: “With this as-yet-unrivalled exhaust treatment technology, we are able to filter and thus reduce by between 90 and 99 percent all three emissions – namely soot particles, nitrogen oxides and sulphur oxides – for the very first time. This comprehensive filter concept is a milestone for AIDA Cruises, but also for the cruise industry as a whole.”

AIDA Cruises will invest a total of about €100m into environmental and climate protection by 2016. “We don’t just want to set new standards with our new ships – we want to continually improve the eco-balance of our entire fleet,” said Ungerer. “This is why we will also be fitting our other ships with the new comprehensive filter system.” The first ship to be retrofitted this past October was AIDAcara, the oldest ship in the AIDA’s fleet.

Alternative forms of power
In addition to retrofitting the existing fleet with the new filter technology, AIDA Cruises is also focusing on additional innovative concepts in order to reduce emissions while the ship is docked. “AIDA ships spend 40 percent of their operating hours in a port,” says Monika Griefahn, Chief Sustainability Officer at AIDA Cruises. “When one considers that, it becomes clear how important our measures for reducing emissions are when the ship is moored.”

AIDA recently teamed up with Becker Marine Systems to develop a groundbreaking alternative concept: the LNG hybrid barge. It will be put into operation in Hamburg during the 2014 cruise season. “This new technology enables us to operate cruise ships in the Hamburg port with the lowest emissions and in the most eco-friendly manner to date,” Griefahn said. “We are thus playing an important role in protecting the environment and improving the quality of life for everyone who lives in the vicinity of the Hamburg port.”

Three-litre ships
In addition to reducing emissions, increased efficiency is a key factor in AIDA’s ecofriendly ship operation. The ships in the AIDA fleet already only use an average of three litres of fuel over 100km of sailing for every person on board, as confirmed in an independent report prepared by Germanischer Lloyd.

AIDA Cruises plans to make this figure even better by using multiple new technologies. For example, the next generation of AIDA ships will be the first cruise ships in the world to feature the innovative Mitsubishi Air Lubrication System (MALS) technology.

MALS allows the ships to glide on an air-bubble carpet, saving seven percent of the operating power. In addition, the next generation of AIDA ships will feature dual-fuel engines, which can be operated using eco-friendly liquefied natural gas.