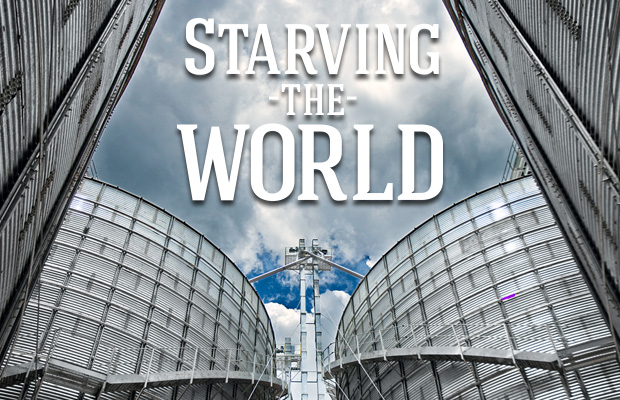 In 2050, there will be more than 2bn extra mouths to feed. Can the global food industry cope?

The global population is set to hit 9.7bn by 2050, up from 7.1bn in 2012. If the food supply industry remains in its current inefficient state, there will not be enough to feed the world. The rapid increase is already putting a considerable strain on the industry. The amount of waste is astronomical. The industry needs to be corrected quickly.

As much as 37 percent of food is currently wasted during production. This is a particular problem for developing countries, where factors such as undeveloped infrastructure can render produce unsanitary. If the food supply industry is to sustain an increasing population, then methods of production, transportation and storage must be modernised. Children golden rice could save every year

Crops lost to pests in the developing world

The world is facing a food crisis. In addition to a rapidly expanding population, an increased use of biofuels and changing dietary requirements are exacerbating the issue. Yet it is difficult to prepare for this because of the volatility of the industry. Professor Tim Benton of Leeds University says the situation is fragile: “If there is a perturbation to the system created by some combination of extreme weather and civil or social unrest, or international wars disrupting supply chains, then the impact on almost any country could be quite profound.”

The cost of going local
Some argue a reduced dependency on external markets and increased self-sufficiency within nations is required to limit this risk. However, self-sufficiency is a fruitless aim; New Zealand’s economy, for example, is dependent on food exports. 50 percent of its total exports are food and beverages, a third of which go to EU markets. Self-sufficiency could ruin it.

While some environmentalists argue carbon emissions produced in the aviation required to transport food around the world are an argument against exports, there are other environmental costs in locally produced food. Were the UK to produce entirely its own food, the transport required to get that produce across the country would compromise the environment just as much as aviation. Urban food miles, such as the consumer’s journey to obtain the food and the journey of waste to land fill, also has a significant impact on the environment whether the product is produced locally or thousands of miles away.

A 2003 study by Simon and Mason showed it was more environmentally friendly for the UK to import apples from New Zealand than to eat local produce. Although the transportation produced CO2 emissions, the production process used far less energy in New Zealand than it would have done in the UK thanks to economies of scale. New Zealand also uses fewer pesticides and less fertiliser. A food supply chain reliant on locally sourced produce can be flawed. If consumers wish to continue enjoying a wide selection of food, regardless of whether the produce is in season or not, at an affordable rate, then imports are fundamental.

However, there are also economic and moral arguments against exports. It is harmful for a country’s economy not to support local farmers, especially when cheaply imported food forces them to lower their prices. The low costs of imported food suggest producers compromise on workers’ wages and labour conditions.

Import vs export
Britain imports 46 percent of its food, leaving it at risk from volatility in foreign markets. If food production in external markets were to slow down, the UK would only be able to feed half its population.

Professor Benton considers efficiency to be the key: “If there is a disruption to one key ingredient, say lentils, should we be growing lentils, recognising that we would not be a competitor on a global market for growing lentils… or should we be finding market alternatives that are sustainable?”

China is experiencing the opposite problem: as a nation, it needs to import more food than it is able to. Much of China’s farmland has been industrialised as part of the rapid urbanisation of the country, so it is unable to produce enough food internally. Fuelling the need for imports is an increasingly affluent population who want to purchase an eclectic selection of produce.

Janet Larsen, Director of Research at the Earth Policy Institute, focuses on the population problem. She says: “With more people in the developing countries trying to move up the food chain to consume more meat, milk and eggs – and thus more grain embodied within – we are starting to see our food supply stretched tight”.

Traditionally, the Chinese have consumed a lot of pork. However, the emerging middle classes are diversifying their meat consumption in line with western preferences, so there has been a significant increase in demand for poultry and beef. Farming beef requires more than twice as much grain as is needed to farm pork. To produce this grain, China needs more farmland. The only solution is to import it, since local farmers are struggling to keep up with the demand. This shortage, according to the UN Food and Agriculture Organisation, has caused prices to double in the last 10 years.

Getting food to mouths
In the developing world, the problem is not so much a lack of space to produce food as a lack of resources to store and transport food to the consumer without it becoming unsanitary and going to waste. One cause of wasted food is pests. In the developing world, up to 25 percent of crops can be lost to pests. This problem will increase as pests become resilient to pesticide.

In the developing world, up to 25 percent of crops can be lost to pests

In 2009, a new species of caterpillar brought Liberia and neighbouring Guinea to the point of crisis. While some pesticides might be effective in tackling this problem, consumers do not want to eat crops that have been treated with pesticides as it is seen as a health risk and environmentally compromising.

Undeveloped infrastructure in developing nations also causes inefficiency and mass waste: one of the most straightforward yet most devastating problems is access to markets. If farmers cannot bridge the gap between production and consumer then the produce goes to waste. This is a particular problem in Nigeria during monsoon season as transport links are crippled.

The Nigerian government is attempting to solve this problem through the launch of the Agriculture Transformation Agenda. The aim is to boost food production by 20 million tonnes per year and create mass employment in processing industries. The agenda was launched in 2011 and, so far, has successfully focused on modernising infrastructure to improve market access.

However, in the more rural areas of Nigeria, it is a five-hour drive through dirt tracks to get to the nearest city – and even this is nearly impossible during rainy season. Similarly, bad refrigeration facilities and limited access to sufficient storage during transportation means the food is not suitable for consumption and is wasted. If transport links were improved, a greater amount of the food produced would reach the consumer, creating a more profitable and efficient industry.

Is food waste the fault of the consumer?
In developed countries, the problem is waste caused by the consumer rather than the producer. Consumers waste on average 15 million tonnes of food per year, of which at least 4 million tonnes is edible. In a recent study, Tesco has shown that 68 percent of its salad is thrown away and one in every 10 bananas. In May last year, the supermarket launched a campaign against food waste after discovering that every family in the UK throws away £700 worth of food every year. Tesco released the results of an accompanying study that showed the supermarket generated around 30,000 tonnes of waste in the first six months of 2013.

In developed countries, the problem is waste caused by the consumer rather than the producer

Mary McGrath, CEO of FoodCycle, a charity that collects surplus food from supermarkets and distributes it to vulnerable people, was unsurprised by the results. It said in a press release: “We have never received any surplus from Tesco… we of course welcome any report that enables food waste to be discussed openly”.

To combat this waste problem – and save the consumer hundreds of pounds – supermarkets are being encouraged to stop multiple purchase offers and to sell produce in smaller quantities. While this would tackle the problem of waste, it would create further environmental problems within the food industry because of the increased requirement for packaging, along with the energy needed to recycle it or the waste created by disposing of it.

A simpler solution would be to eat more of the food the consumer currently throws away – especially considering a lot of it is still edible. Consumers do not know the difference between “use by” and “best before” labels, for example, and are creating unnecessary waste. Either the consumer needs to be educated or the use of “use by” dates should be reconsidered.

The good in GM food

Genetically modified solutions
Organisations such as the Waste and Resources Action Programme (WRAP) are coming up with solutions to prevent food waste that do not involve increasing the amount of packaging. In January last year, representatives of the UK food industry joined forces to explore and support initiatives to limit food waste. These included donating surplus food to charities such as FoodCycle and FareShare, and encouraging supermarkets to turn surplus food into animal feed or recycle it into renewable fuel.

Andy Dawe, Head of Food and Drink at WRAP, said: “Preventing waste arising not only saves money in tough economic times but also provides environmental savings. Where there is a surplus of food, it is important to make sure it’s being used in the best possible way.”

While these solutions might be appropriate in the short term for a developed nation, the only worldwide way to make the food supply industry more efficient is the (controversial) genetically modified crop. They are pest-resistant so eradicate the need for pesticides and thus limit the health considerations.

GM crops are also resistant to adverse weather conditions, can be adapted to contain the necessary nutrients to tackle malnutrition, and remain edible for longer. The downside is GM crops have the potential to cause pesticide resistance over time.

This debate has recently been forced into the spotlight because of ‘golden rice’: rice genetically modified to contain vitamin A. It is believed this GM crop could save the lives of over 600,000 children a year in the developing world and prevent many more from going blind. However, batches of golden rice ready for testing in the UK were destroyed by protesters who said the benefits claimed were misleading – an act labelled “wicked” by Environment Secretary Owen Paterson.

Aside from GM crops, the way to tackle waste in the food supply chain is to address the problem at source and distribution. With a more efficient distribution system and intergovernmental agreements in place, the transportation of food on a large scale can be streamlined. And for that to happen, the world’s supermarkets need to get on board.